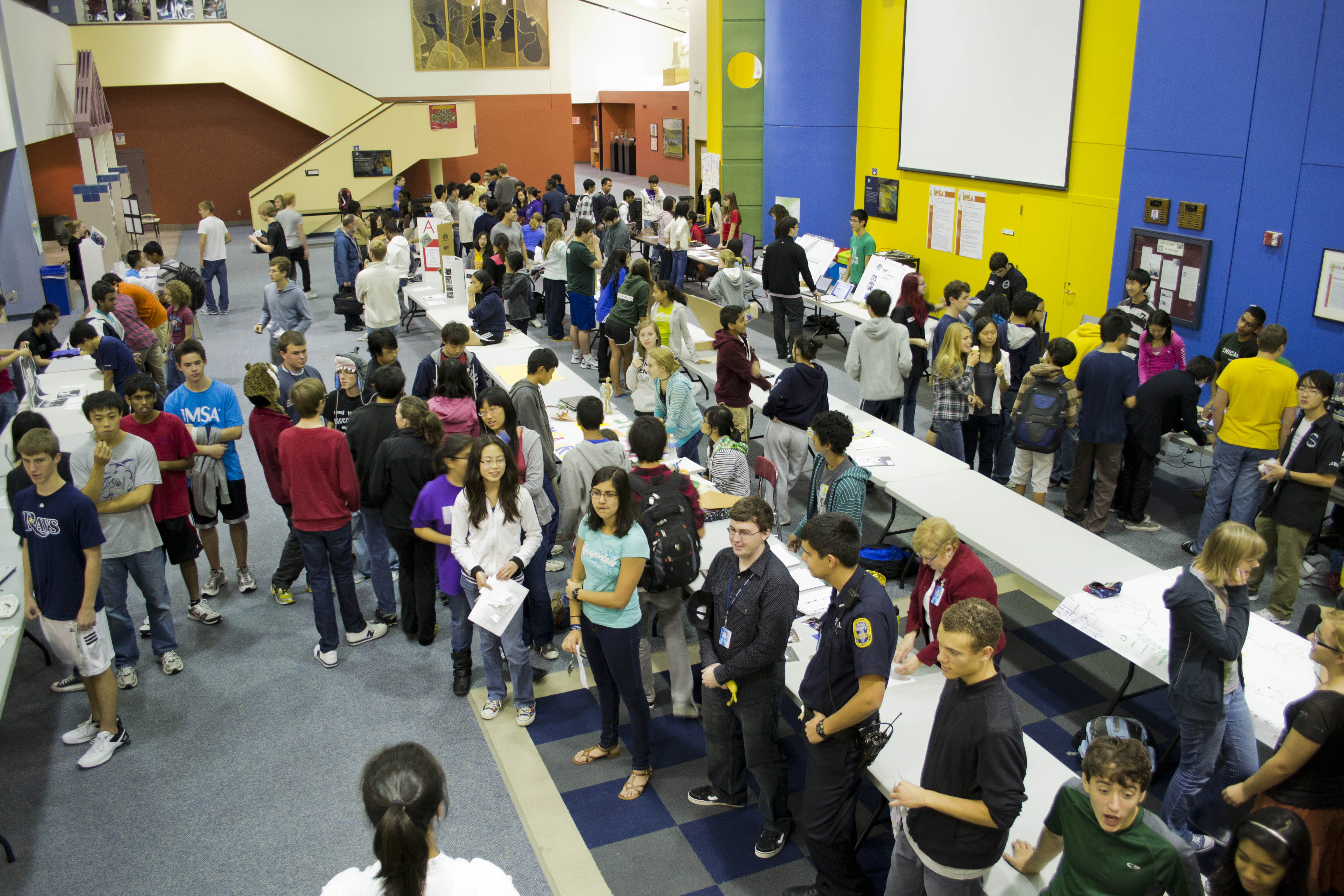 Each year the Old Caf is filled with representatives from a multitude of clubs at IMSA.  Lines of tables are set up and representatives from each club advertise their club to students.  It’s the annual IMSA club fair.  Each year the club fair gives students a chance to learn about and join new clubs.  The club fair will be taking place on Monday, October 1, from 5-6:30PM in the Old Caf.

The Advanced Computing Association (ACA) provides resources to students in order to set up any projects they want related to computers. ACA also provides workshops where people can come and learn or teach about any computer topic that they would like, such as programming, networking, or even hacking. Anyone who enjoys computers or would like to start a computing project is encouraged to join. African-American Students Association (AASA) aims to educate the IMSA community about African American/ Black culture.  The meetings are open to everybody.

Amnesty International is an NGO that seeks to educate people about human rights issues.  The club educates the IMSA community through presentations and discussions.

Advancing Knowledge in Biology/An eXploration Of Neuroscience (AXON) is dedicated to teaching and learning about the brain.  Come have a great time at the meetings!

Badminton Club gives students a chance to play friendly and competitive badminton with each other.  The club also holds several tournaments throughout the year that students can participate in.  Students of any skill level can join.

Crossfire Debate Club gives students a chance to practice their public speaking skills with students and ponder ethics- and have fun doing it.

Economics Club teaches the campus basic concepts of economics.  The club also fosters intellectual economic debate and furthers the understanding of economics of its members.

Exodus is a hands on program that gives students a chance to tutor refugees in the Aurora area.  Service hours are given.  The club also promotes campus wide awareness about refugees.

Indian Student Alliance (ISA) educates students about Indian culture and heritage.  The club’s two major events are Diwali in the fall and a Samosa Mixer in the spring.  Anyone can participate.

Karate Club teaches people how to defend themselves and stay fit.  Sessions of the club include sparring, educational classes, and practical self defense.

Medical Society educates the IMSA body about the medical field.

Mod 21 is IMSA’s a capella group. Anyone interested in singing for the IMSA community or singing in general would love this group.  Members are selected by audition.

Radio Club members of this club can help make radio productions that air to IMSA students over the internet.  The IMSA radio station features popular music, DJ’s, news, and more.

The Ping Pong Club serves as a medium for students to share the joys of playing ping pong on IMSA campus, while granting them the opportunity to hone their skills for competitive play.

Shanti spreads the Hindu culture and religion by planning festivities and trips for the IMSA community. The club shares the stories behind holidays and events so students know why they are celebrated. Students interested in Hindu meditation and yoga are also encouraged to join the club.

Student Committee for IMSA Advancement works to improve legislative and alumni relations. Events planned for this year include legislative panels.

Spectrum is IMSA’s Gay-Sraight Alliance.  The club provides a safe place for members of the LGBTQ community and Allies to discuss LGTBQ issues at IMSA and worldwide.

SPARK is a club that focuses on making a difference on the impact of neurodegenerative diseases through partnerships, research, internal education, and service. We were inspired by the cause-based organization Shine On’s work last year on ALS, and plan to continue and expand upon Shine On’s actions.

IMSA Christians is the body of Christ at IMSA. We are here to provide a place for IMSA’s Christian community to spiritually grow. We also seek to represent our faith well to those unfamiliar with Christianity. Whether you have gone to church your entire life or just want to check out what that “Christian thing” is, you’re welcome to join us for Bible study, prayer, and Christian fellowship!

Descriptions are not available for the following clubs. However, you can still learn more about them at the club fair:

Acronym is IMSA’s official student newspaper, which is what you’re reading right now! At least one new article is published every day on topics ranging from sports to world events. In addition to an online news source, we will also be publishing a quarterly print edition. If you missed the staff writer application deadline last month, we will have sign ups for those who are still interested at club fair!

Junior Statesmen of America (JSA) promotes civic engagement and provides an outlet for students to voice their opinions. Some activities include gavel debates, debate watch parties, and thought talks! We attend three major conventions throughout the year: Fall State, where we debate in the chambers of the Wisconsin Capitol building, Winter Congress, in Washington DC, and Spring State, in Oakbrook Illinois.

Model United Nations (MUN), as its name would suggest, is a simulation of the United Nations. Students sign up to be ambassadors for a country and work to advance their country’s aims. Conferences are held at a variety of colleges across the country, including the University of Chicago and Cornell University.

Descriptions are not available for the following co-curriculars. However, you can still learn more about them at the club fair:

Be sure to check out these clubs at the club fair tomorrow, October 1 from 5-6 in the old caf!

Club heads- if you would like to add a description for your club, shoot Jen, Summer, or Anthony an e-mail!

The Dangers of Overcommitting

Be the first to comment on "IMSA Club Fair Open Monday"