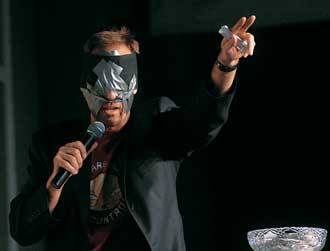 Mentalism – a mysterious branch of magic that capitalizes on the power of the mind.  As impossible as it sounds, people in this specialty – known as mentalists – seem able to read minds and discern and alter objects without touching them. Odd? Yes. Entertaining? Definitely.

On Thursday October 31 will be a captivating show that will only make the night even more mysterious. Chris Carter, a renowned mentalist, is considered by many to be one of the world’s best mind-readers – and he’s coming to IMSA.

“You’ve been given the opportunity to see a hypnotist,” says Lynette To (’14), CAB director of Student Council. “The mentalist puts a spin on mind tricks that you’ve never seen before.” While Lynette has never seen Chris perform, she found him on a list of entertainers on the Campus Activities Website, and he was described as both popular and unique. Thanks to pursuing both theater and psychology in college, Chris is able to perform a humorous, entertaining show that simultaneously excites and amazes.

Chris has performed for a wide variety of major corporations as well as over 2500 college campuses. On college student surveys, he is consistently ranked as one of the top performers, and he’s received such awards as Entertainer of the Year, Performing Artist of the Year, Best Male Artist, and Best Live Novelty Performer in the college industry. Chris has even appeared on television and radio, and he’s performed on three different continents.

In previous acts, Chris has shared the innermost thoughts of audience members, described chosen objects, and deduced the serial number of a dollar bill. He performed these tricks and more, all while being blindfolded with nine layers of duct tape, a silver dollar over each eye, and a heavy black cotton blindfold.

Want to see it for yourself? Then make sure to be in Sodexo from 6:00-6:45pm, when Chris will be performing personal tricks. Afterwards, stick around to see the main event in the Old Cafe at 7:30pm and see what’s really spooky about All Hallows’ Eve.