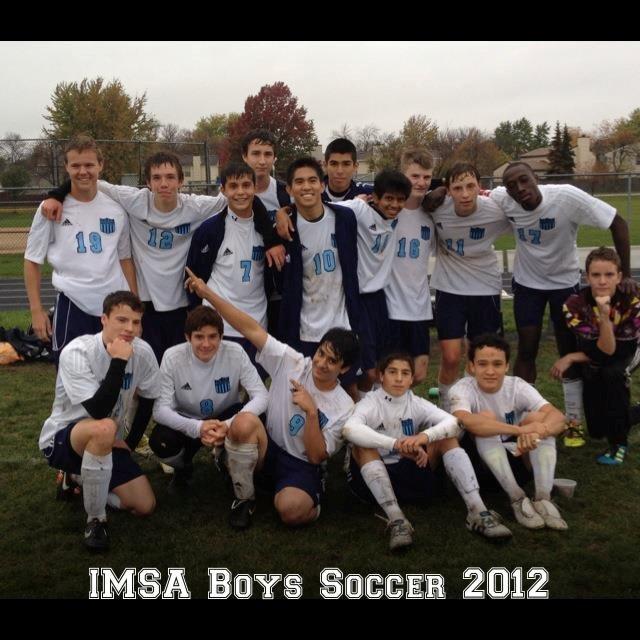 Boys Varsity and Junior Varsity Soccer have wrapped up their 2012 season with a 6-15-1 and a 2-15 record, respectively.  At first glance, you may see the record and dismiss IMSA’s soccer program as a background activity for students with schoolwork and academics as their top priorities.  However, you should not be so quick to write off IMSA soccer.  As a team that started off by losing their first ten games, the comeback to go 6-5-1 shows that the story of this season is not measured in overall record, but in the team’s immense improvement.

IMSA’s soccer players put in the work to give themselves the best chance to compete.  Practice took place every weekday from 4:30 to 6:30 P.M., along with the occasional Sunday practice at the beginning of the year.  Team captains were Anthony Mercado at sweeper and Ayun Brown playing outside defender as well as goal keeper.  Also, the help of managers Simone, Ray, and Connor was greatly appreciated.

The expectations for the team may not have been high coming into the season.  After all, the players did not come to IMSA for their soccer program, they did not come for the state championship, and they are not here for their soccer future.  The players each have a better way to spend their time than playing a game that will inevitably be left behind in a few years.  However, Coach Greg Frederick was not going to accept these excuses and allow for IMSA to continue scraping by.  Immediately, he let players know the standards for the year by utilizing his signature motivational phrase, “Why not IMSA?”  The attitude he brought into the season requested that all members of the team display full dedication and effort.  Coach Frederick made sure each of his players knew that they were not going to sit by and use the history of the school’s soccer program as an excuse.

The turnaround may have taken a while.  IMSA played its first ten games with only one against a conference team.  Starting out with ten losses in ten games would take the motivation out of most teams, but that was not the case for the Titans.  Going into a tough game at Oswego East on their senior night in rainy, messy conditions, IMSA could have given up.  They could have convinced themselves that Oswego East was better than them; after all, this is IMSA, and there’s always next year.  However, they did not quit.  Instead, they went to Oswego East and tied them on their senior night, which ultimately stood as the rallying point of the season.  Sophomore player Zach Yager sums it up as, “In the beginning we lost a lot, but then we started picking it up.”  IMSA would place 4th of 8 teams at a tournament in Carlandsville, beat Sycamore and then lose to the number one team in regional playoffs, finishing with 5 wins and the tie with a 3-2 conference record. IMSA’s soccer is a program to watch in the coming years as the team comes out to change how other schools see IMSA and how IMSA views itself.  Coach Frederick hopes to bring out this change of mindset and show the conference that IMSA is not a team to walk all over.

Be the first to comment on "Why Not IMSA? A Look At Boys Soccer"