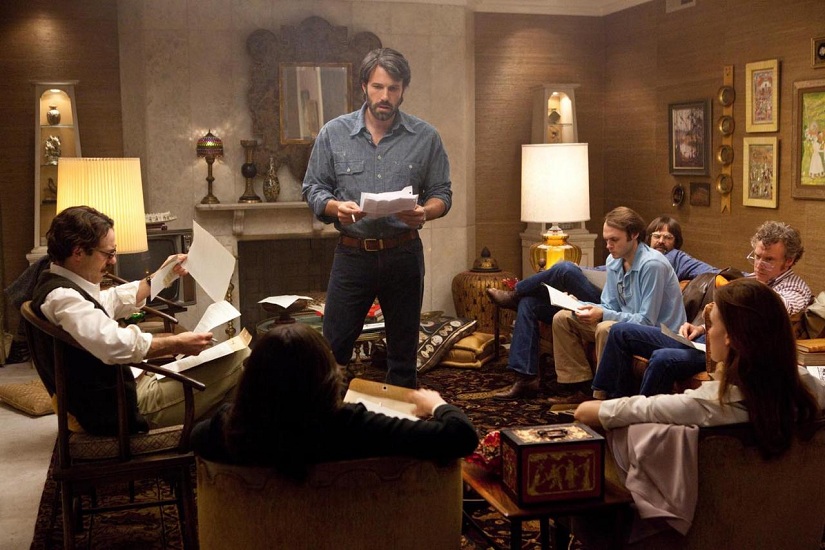 Summary: Angered by the US’s support of the former Shah, Mohammad Reza Pahlavi, Iranian militants attack the US embassy on November 4th, 1979 and take most of the occupants hostage. Six, however, manage to escape and seek refuge with a Canadian ambassador. Stateside, CIA specialist Tony Mendez (Affleck) comes up with a plan to smuggle the six escapees out of Iran by posing as a film crew location-scouting for the (fictional) science fiction film Argo. With the help of makeup artist John Chambers (Goodman), producer Lester Siegel, and his skeptical supervisor, Jack O’Donnell (Cranston), Mendez flies into Iran to put the plan in motion.

Review: With a premise that could easily veer into Liftetime movie territory, Argo is, in many ways, a study in restraint. With such an outlandish, albeit true, premise, any unnecessary showmanship could easily push it across the boundary of awe-inspiring into the much-dreaded eye-roll territory.

Argo, however, has one thing the everyday inspired-by-a-true-story film does not: suspense. The old-fashioned, nail-biting kind, reminiscent of the kind which made Hitchcock famous and has been increasingly hard to find on the silver screen. In fact, the understated nostalgic charm of Argo is arguably its greatest strength. “Old-fashioned” films have become critical, if not popular,  favorites. Last year, for example,  the movie which received the most accolades was The Artist, a black-and-white silent film. Not to say that Argo does not have other merits. While the character depth and development leave something to be desired overall, Joe Stafford, one of the six escapees (played by Scoot McNairy) proved to be the welcome exception. He is set up as the possible deal breaker, entirely untrusting of Mendez and his plan. However, in a pivotal scene at the climax of the movie, he proves an unexpected and unsung hero while providing a balance to Mendez’s classic bravado.

In the end, Argo is a film of details. The premise and the storyline make it good, but it is the little things–realistic minor characters, well-placed comedic interludes, etc., that make it great.

Oscar Buzz: Argo is a definite front runner for Best Picture. While his character may not be quite strong enough to win him any Oscars, particularly against the likes of Daniel Day-Lewis (Lincoln), Joaquin Phoenix (The Master), and Denzel Washington (Flight), the third time might prove the charm for Affleck in his directing career.

Be the first to comment on "Film Review: Argo"