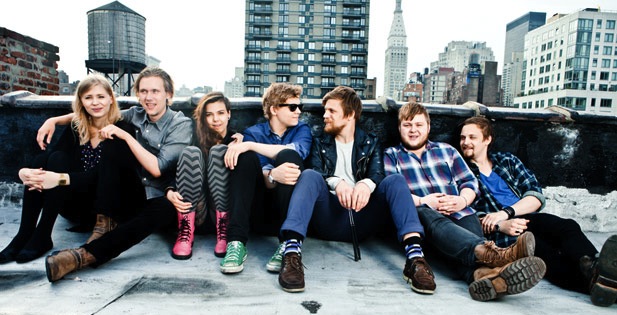 To many people, Icelandic music is little more than a far off-shoot of pop culture that brings to mind the likes of Sigur Ros and Bjork. In reality, Iceland has much to offer especially as far as folk music goes having bred bands such as Seabear, Mum, and FM Belfast; many of which have spread far beyond the reaches of the Scandinavian Island through websites like Last.fm, Tumblr, and SoundcloudTne f Folk ensemble Of Monsters and Men fits nicely in this niche of music delivering a unique blend of folk and pop that takes on an entirely new feel with the addition of singing duo Nanna Bryndís Hilmarsdóttir and Ragnar Þórhallsson.

The combination of both male and female vocals allows the band to take on a form of its own, creating harmonious stories about nature, life, and love. As Hilmarsdottir puts it, “We connect the name [of the band] to some of our lyrics and what we try to accomplish with the music.” The name Of Monsters and Men is the epitome of nearly each and every song in My Head is an Animal, many of them being based on some sort of struggle with oneself or with the world. “There’s an old voice inside my head that’s holding me back,” pleas Hilmarsdottir to the background of a driving bass drum on the anthem-like song “Little Talks”.

Of Monsters and Men has gained extreme popularity in the United States with  the aforementioned song “Little Talks” reaching the 53rd spot on Billboard’s Top 100, something not typically seen for a folk band, let alone for a debut album. The success of folk groups like Mumford and Sons and Edward Sharpe and the Magnetic Zeros suggests a bright future for the Icelandic outfit, who have already  played at festivals such as Leeds and Chicago’s own Lollapalooza in addition to performing in sold-out shows across the nation. They  toured  the US with their debut album My Head is an Animal the past spring and are rumored to have already begun on a sophomore album. Whether the band’s second album will be as stunning as its first remains to be seen, but the group expresses its hope for success on the album’s closing song “Yellow Light”. As the song gathers in intensity,  Hilmarsdottir softly coos “The earth is shaking and I see a light”, immediately followed by a grand melodic crescendo, an ascension to something bigger and greater than the band itself. As a whole, My Head is an Animal leaves the listener wondering “What’s next?”

Only time will tell, but the future looks bright.

Be the first to comment on "Music Spotlight: Of Monsters and Men"