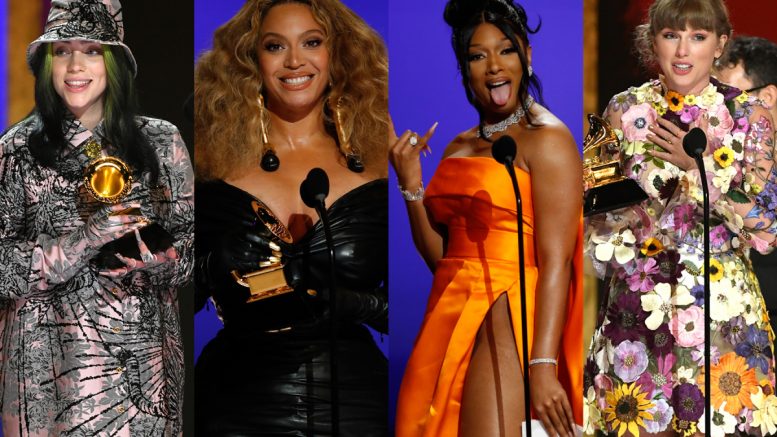 The 63rd annual Grammy Awards took place on March 14th, and this is still a night to remember, despite how different it looked from previous years. Instead of performances in front of large audiences, this year’s show was a virtual display of performances with a restricted number of guests. The red carpet was also very limited, including rules of  10 to 15 foot social distancing, mandatory testing and face masks for reporters, and a maximum of five news outlets to work the carpet. There were also many memorable performances by artists, inncluding Taylor Swift, Billie Eilish, Cardi B and Megan Thee Stallion, Post Malone, Dua Lipa, and more. In case you missed the show, here are five big takeaways from the 2021 Grammys.

1. Beyonce Becomes the Artist Winning the Most Grammys in History

After Beyonce took home awards for her songs “Black Parade” and “Savage (Remix),” she officially became the most Grammy-winning artist. She earned her first Grammy nomination over 20 years ago with Destiny’s Child and their song “Bills, Bills, Bills” and received her first official Grammy award in 2001 at just 19 years old. She is now 39 years old and has attained 28 trophies, along with a total of 79 nominations. During her acceptance speech, she reflected upon her accomplishments and said, “This is so overwhelming, I’ve been working my whole life – since nine years old – and I can’t believe this happened on such a magical night.” This year’s award ceremony was important to Beyonce because this was the first time she attended the Grammys since 2017.

2. Taylor Swift is the First Woman to Win Album of the Year 3 Separate Times

Once “Folklore” was announced as the winner of Album of the Year, Taylor Swift officially landed herself as the first woman to win Album of the Year on three separate occasions. Her first win was with the “Fearless” in 2019, the second was with “1989” in 2016, and “Folklore” was her most recent. The only other artists to ever land this award three separate times are Frank Sinatra, Paul Simon, and Stevie Wonder. Swift made sure to accept her award with her two co-writers, Aaron Dessner and Jack Antonoff, who helped her create and produce the entire “Folklore” album during quarantine. She also made a special shoutout to one of her collaborators that she had yet to meet. During her acceptance speech, she said, “I’m so excited to meet you one day!” to her duet partner, Justin Vernon, a member of Bon Iver.

3. Billie Eilish is the Youngest Artist to Win Record Of The Year Twice

Earning the titles of Best New Artist, Best Rap Song, and Best Rap Performance, was Megan Thee Stallion. The award of Best New Artist is monumental since the last female rapper to win this award was Lauryn Hill back in 1999. Her song “Savage (Remix)” with Beyonce allowed both artists to successfully earn the Best Rap Song and Best Rap Performance awards. This year was the first time Megan Thee Stallion was asked to perform, and she was honored to walk out of this ceremony winning three out of the four categories she was nominated for. During her acceptance speech for Best New Artist, Megan recognized her mother, who had passed in 2019, by stating, “I know she is here with me in spirit.”

Beyonce and Jay-Z’s daughter, Blue Ivy, was announced as a winner for the category Best Music Video with her song “Brown Skin Girl.” Her song aimed to honor the beauty of black and brown girls and was featured in “The Lion King: The Gift.” Blue Ivy was able to go on stage to claim her Grammy with her mother and Wizkid, who both helped in the production of the music video for her song. Blue Ivy is now the second-youngest recipient of a Grammy Award at just 9 years old.