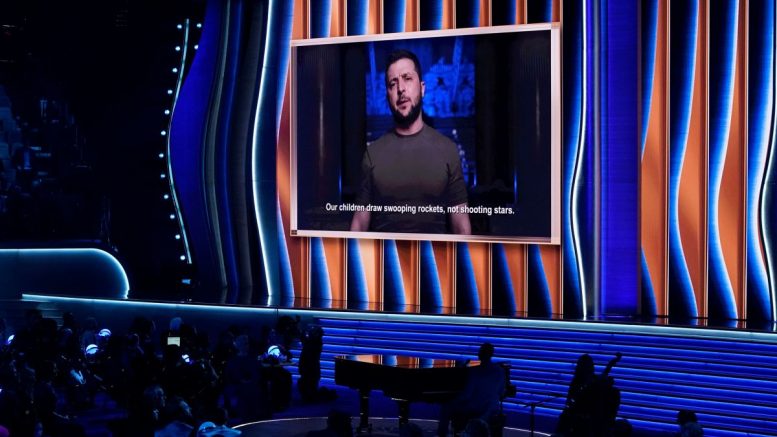 One week after that infamous altercation between Will Smith and Chris Rock at the Oscars, another awards show took place. The 64th annual Grammy Awards, which was held for the first time in Las Vegas on April 4th was an exciting night celebrating some of the most popular artists in the U.S. today.

Olivia Rodrigo served as opener for the night. Performing the song that led to her widespread fame, “driver’s license,” in a car on set, Rodrigo sang her heart out. The performance was crafted with careful attention to set design and artistry. It began with the pop star tuning the dial of the car’s radio, switching from song to song (each of them being Rodrigo’s) and finally landing on “driver’s license.” After finishing the first verse of the song, Rodrigo slowly exited the car and delivered an emotional performance of the rest of the hit track.

Although the show was free from any physical violence between celebrities, the Grammy’s failed to leave the Will Smith-Chris Rock drama behind entirely. Minutes into the show, host Trevor Noah made a joke about “keeping people’s names out of our mouth” in his opening monologue – a reference to the Oscars moment when Smith cursed at Rock and demanded he leave his wife’s name out of his comedy.

Allowing us to reflect upon the tragic war and subsequent humanitarian crisis occurring in Ukraine, Ukrainian President Volodymyr Zelensky gave a heartfelt pre-recorded speech discussing how music represents the opposite of the silence of war-torn cities filled with those who have died in the conflict. “Fill the silence with your music. Fill it today to tell our story,” Zelensky said. The speech was followed by a powerful musical tribute from John Legend and multiple Ukrainian artists – poet Lyuba Yakimchuk, singer Mika Newton, and bandura player Siuzanna Iglidan.

Although the Grammys programming has shifted in recent years to showcasing performances by top artists throughout the televised broadcast rather than handing out awards, a portion of the show was dedicated to recognizing winners of some of the biggest accolades. Artists like Olivia Rodrigo and Jon Batiste were favorites going into the ceremony, with the latter coming in with eleven nominations. Batiste ended up taking home five awards, including Album of the Year. Olivia Rodrigo received the award for Artist of the Year, along with best pop vocal album and best pop solo performance. R&B group Silk Sonic, which consists of Bruno Mars and Anderson .Paak, also came out as a big winner of the night, receiving four awards including the Grammy for Song of the Year.

With captivating performances by top artists, a compelling speech allowing us to acknowledge the conflict currently impacting areas of our world, and some of the most popular singers winning big, the Grammys brought a much needed sense of normalcy in a near-drama-less night of entertainment.

5 Things You Might’ve Missed from the 2020 Grammy’s