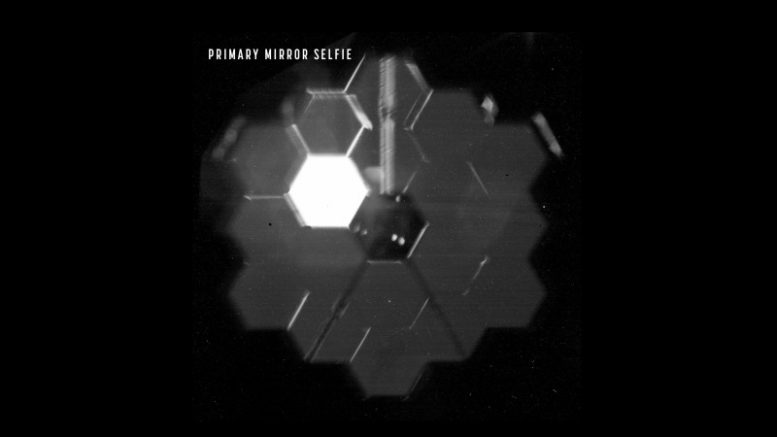 This "selfie" was one of the first photos taken by the James Webb Telescope on Feb.11.

The James Webb telescope is a 10 billion dollar observatory spacecraft used to examine other planets’ atmospheres to see if they are habitable, or possibly already inhabited. It reached its final destination on Jan. 24, a million miles away, but it still orbits the Sun. The telescope is located in Lagrange Point 2 (L2) which is protected by Earth’s shadow and keeps the sunlight from damaging the telescope.

According to NASA, without the disruptions of our sun’s light, the telescope will be able to capture light from the first galaxies that have been traveling in space since the Big Bang.

In short, the Big Bang theory states that the universe was at a single point and then began expanding to what the universe is today. Scientists believe it is still expanding because galaxies are moving farther away from each other. Eventually, the universe will reach its farthest point and slingback like a rubber band.

Administrator Bill Nelson believes, “It will deliver world-class science. It’s a revolutionary technology that will study every phase of 13-and-a-half billion years of cosmic history.” With the research that can be gathered from their findings, we could have a better understanding of how the universe works and how it will end, as well as gain more knowledge about ourselves. 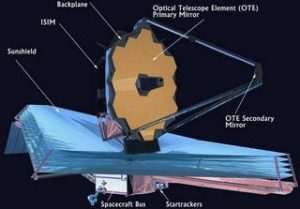 This is a diagram of the James Webb Telescope created by NASA. (Source | NASA)

To the left, there is a diagram of the telescope. There is the Primary Mirror, which is shaped in hexagons and detects lights billions of light-years away, to the beginning of the universe. This means we will be able to look back in time, 13.7 billion years ago.

To look back into the past, we can look at the stars. The brightest star visible in the northern sky is Sirius, also known as the Dog Star. The star is 8.6 light-years away from Earth. This means the light produced from Sirius has been traveling 8.6 years when you look at it tonight. This is why we can see “in the past.” The light is still traveling and will continue to travel. Light never “goes out” or weakens (because there is no atmosphere to terminate or absorb light) in space.

These mirrors are coated with a thin layer of gold to enhance the reflections of any infrared light. The Backplane assembles the hexagons as well as contains other telescope instruments on the back. There is a secondary mirror that reflects any light that it captures to the ISIM which produces images. The Sunshield protects the telescope from any external light interference. For the telescope to operate, it needs to be 370 degrees Fahrenheit. The heat the telescope could produce will interfere with infrared light and can collect inaccurate data or the scientists could miss something. The Startracker tracks the light coming from stars. Last, but not least, the spacecraft bus is a communications & computing satellite used to control the telescope.

This is the first image ever captured by the James Webb Telescope, taken on February 11. Even though this looks like several stars in space, it is actually the same star. Unfortunately, the 18 mirrors on the telescope are currently unaligned to the star and produced several images of the star, HD 84406, instead of one clear photo. More information can be found on the NASA website as well this short video on YouTube. Photons Received: Webb Sees Its First Star – 18 Times

Platypuses: the Freaks of Biology

Be the first to comment on "James Webb Telescope Reaches Final Destination, L2"