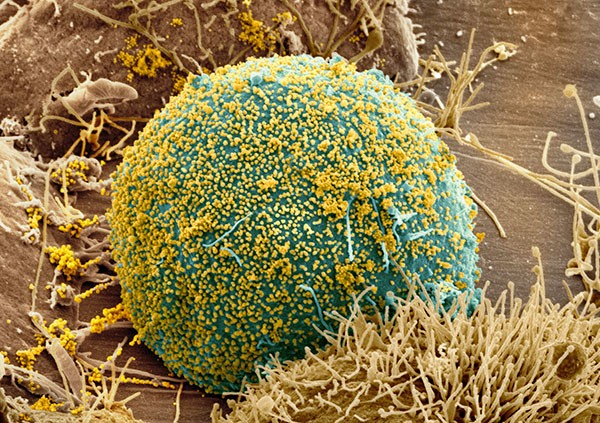 After receiving a stem cell transplant involving umbilical cord blood, an American, mixed-race patient has become the first woman and third person ever to be cured of HIV. In June 2013, the patient, who is past middle age, was diagnosed with HIV. She used antiretroviral drugs to keep her virus levels low.

She was diagnosed with acute myelogenous leukemia in March 2017. Then, in August of that year, she received cord blood from a donor with the HIV blocking mutation and cord blood to treat the leukemia. Thirty-seven months after the transplant, she stopped antiretroviral therapy and 14 months later, she demonstrated no signs of HIV in blood tests.

“This is now the third report of a cure in this setting, and the first in a woman living with HIV,” Sharon Lewin, President-Elect of the International AIDS Society, said in a statement

The previous two cases that were cured were male. One was white, and one was Latino. They both received bone marrow transplants.

Timothy Ray Brown, “The Berlin Patient,” was the first person cured of HIV. He was free of HIV for 12 years until he, unfortunately, passed away from cancer in 2020.

Adam Castillejo, “The London Patient,” is the second person cured of HIV. He received a bone marrow transplant as treatment for his Hodgkin’s lymphoma. He was reported to be cured of HIV in 2019. His case was a confirmation that Brown’s occurrence was not a fluke, there could be a cure to HIV.

Sharon Lewin, President-Elect of the International AIDS Society, said bone marrow transplants are not a viable strategy to cure most people of HIV. A bone marrow transplant is not a viable option for most patients because it is highly invasive and risky. Usually, they’re offered as a last resort for patients with cancer left with no other options.

Both men received bone marrow transplants from donors who carried a mutation that blocks HIV, and they were met with complications after their transplants. Both faced graft versus host disease, a condition in which the donor’s cells attack the recipient’s body.

After Brown’s transplant, his complications were so severe he nearly died. Castillejo’s treatment was less intense, but he nearly lost 70 pounds in the year after his transplant. According to his doctor, he also developed hearing loss and survived multiple infections.

This patient was the first case involving umbilical cord blood. Cord blood allows for greater possibilities of curing those with HIV, and specifically for those of diverse racial backgrounds, because of its wider availability than adult stem cells used in bone marrow transplants.

Umbilical cord blood does not need to be matched as closely to its recipient as bone marrow transplants. This makes it a greater option because most donors are of Caucasian origin, meaning that umbilical cord blood, allowing for partial blood matches, has an increased potential of curing dozens of Americans with both HIV and cancer.

In comparison to the recovery of the two HIV patients that received bone marrow transplants, the female patient had a greater recovery. Seventeen days after her transplant, she left the hospital. She did not develop graft versus host disease, said Dr. JingMei Hsu, the patient’s physician at Weill Cornell Medicine.

She was given partially, “haplo,” matched blood stem cells from a close relative because it takes roughly six weeks for cord blood cells to engraft. Receiving her relative’s cells may have spared her from the side effects that the other HIV-cured patients faced.

Harboring the possibility to treat a greater diversity of people and have fewer drawbacks, “Umbilical stem cells are attractive. There’s something magical about these cells and something magical perhaps about the cord blood in general that provides an extra benefit,” said Dr. Steven Deeks, an AIDS expert at the University of California, San Francisco.

Thirty-eight million people are living with HIV, and roughly 73 percent of them are receiving treatment. HIV can be controlled, but not cured, by antiretroviral drugs. Umbilical cord treatment could cure people living with HIV, regardless of ethnicity or race. Cord blood, rather than bone marrow, allowed researchers to use a partially matched donor for the woman, who is of mixed race. Alongside this, she had a speedy recovery because of her immune system boost from blood from a close relative.

At the Conference on Retroviruses and Opportunistic Infections, the researchers said that the sex and racial background of this new case marks a significant step forward in developing a cure for HIV.

Infection with HIV is thought to progress differently in women than in men, but despite women making up more than half of HIV cases in the world, only 11 percent of participants in cure trials are female.

These cured patients provide hope for finding a viable cure for all people living with HIV. “Taken together, these three cases of a cure post stem cell transplant all help in teasing out the various components of the transplant that were absolutely key to a cure,” Lewin said.