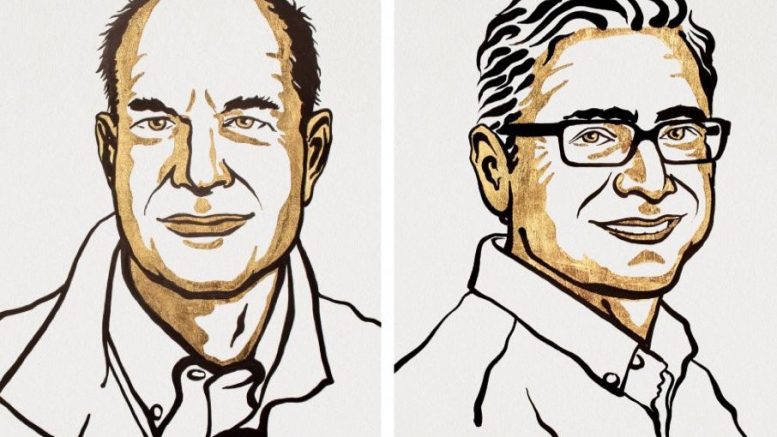 On October 4th, the 2021 Nobel Prize in Physiology or Medicine was jointly awarded to Dr. David Julius and Dr. Ardem Patapoutian. According to the Nobel Assembly, which consists of fifty professors from the Karolinska Institute, these scientists were chosen for the Nobel Prize because of their “discoveries of receptors for temperature and touch.”

Presented by the Nobel Assembly at Sweden’s Karolinska Institute, the Nobel Prize recognizes remarkable contributions made in a specifically designated field. The Nobel Prize for Physiology or Medicine is currently in its 120th year.

Physiology or Medicine is one of five Nobel Prizes awarded annually. The five categories of the Prize are bestowed upon “those who, during the preceding year, have conferred the greatest benefit to humankind” in their respective fields, as stipulated in Alfred Nobel’s 1895 will.

This year’s laureates won their titles through their research on how temperature and pressure are perceived via nerve stimulation. To investigate the topic, Julius made use of capsaicin, the compound in chili peppers that causes a burning sensation. With capsaicin, he identified a sensor responsive to heat in the skin’s nerve endings. Patapoutian, on the other hand, employed pressure-sensitive cells in his research, using them to discover “a novel class of sensors that respond to mechanical stimuli in the skin and internal organs.”

Julius and Patapoutian’s research is among the most recent in a long history of the study of the nervous system. Their discoveries build upon those of past scientists in the field, such as the 1944 Nobel Prize in Physiology or Medicine laureates, Joseph Erlanger and Herbert Gasser, who found that different nerve fibers are responsible for detecting various stimuli.

Erlanger’s and Gasser’s findings opened the door for subsequent research in nerve cell specialization, and looking forward, Julius’ and Patapoutian’s have done the same; their discoveries have filled critical gaps in the foundational understanding of how the nervous system processes stimuli.

Julius’ research using capsaicin began in the late 1990s at the University of California, San Francisco. Capsaicin was already known to be the cause of the burning sensation brought about by touching a chili pepper, but how the compound activated nerve cells to produce pain was a mystery. To find out, Julius and his team compiled a collection of “millions of DNA fragments corresponding to genes that are expressed in the sensory neurons” that react to external stimuli. Expressing each of these genes in cultured cells that are typically unresponsive to capsaicin, they were able to identify a single gene that makes cells capsaicin-sensitive. Investigating further, Julius realized the heat-sensing receptor he had isolated, named TRPV1, is activated at “temperatures perceived as painful.”

Following the discovery of TRPV1, many additional temperature receptors were identified. These include TRPM8, which Julius and Patapoutian came across independently of one another, and others. Still, however, while the understanding of temperature sensation was growing, the perception of mechanical stimuli remained an enigma, one that Patapoutian wanted to bring into the light.

Working at Scripps Research in La Jolla, San Diego, California, Patapoutian and his team began by identifying a “cell line that gave off a measurable electric signal when individual cells were poked with a micropipette.” Potential mechanical stimulus receptors were determined alongside the genes that encoded them. These genes were each then inactivated until two genes responsible for mechanosensitivity had been identified: Piezo1 and Piezo2. Following the discovery of the Piezo genes, Patapoutian and others produced a series of papers illustrating that Piezo2 is essential for the sensation of touch and functions, including proprioception.

Together with their identification of TRPV1, TRPM8, Piezo1, and Piezo2, Julius and Patapoutian have laid the groundwork for deeper research in the sensation of both temperature and mechanical stimuli. The laureates’ ongoing research seeks to expand upon the functions of these genes in physiological processes, and already, the knowledge the scientists have made available is being put towards the development of treatments for a broad range of medical conditions.