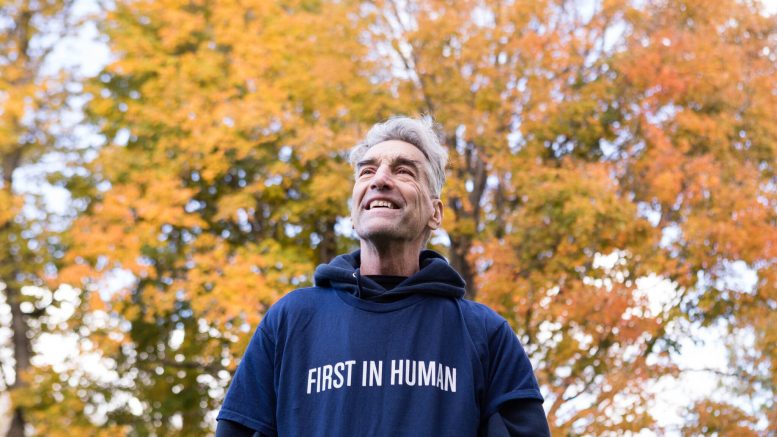 Scientists may have finally discovered a cure for type 1 diabetes. Brian Shelton, the first patient in a clinical trial by Vertex Pharmaceuticals, has shown promising signs of a recovery from the devastating disease following experimental treatment. Although the evidence is preliminary and no results have yet been published, the medical community remains optimistic that the treatment will prove effective in other patients.

Diabetes is a group of chronic medical conditions that affect the body’s ability to regulate blood sugar, resulting in abnormally high blood glucose levels. The two main forms of diabetes are type 1 and type 2 (a third type, gestational diabetes, sometimes appears in pregnant people until they give birth). Type 2 diabetes is by far the most common form of the disease, resulting from acquired insulin resistance in millions of people around the world. However, the new treatment would only target the less common type 1 diabetes, which is usually evident in patients from a young age and is associated with the pancreas’ inability to produce enough insulin.

Unfortunately, diabetes is a chronic disease that is typically lifelong. While exercise and a healthy diet can help diabetes patients, there is no proven method of total and consistent recovery (except partial or total pancreas transplants, which is not feasible for most diabetics due to organ shortages). People who suffer from any form of diabetes are often treated with regular insulin supplements (through either injections or an insulin pump) to regulate their blood sugar. The cost of insulin can be a significant financial burden for Americans with a cost of at least $350 to $900 a month. As a result, many people with diabetes are forced to skip vital doses of insulin and face potentially fatal consequences.

Type 1 diabetes had a severe impact on Brian Shelton’s life. His sudden losses of consciousness caused him to crash his motorcycle into a wall and to lose his job in the United States Postal Service at the age of 57. The other adverse medical effects of type 1 diabetes can include retinopathy (which leads to vision loss and blindness), kidney disease and failure, a significantly increased likelihood of heart attacks and strokes, and unexpected death while sleeping.

Shelton’s treatment involved an infusion of artificial pancreas cells that were grown from stem cells, which can replicate and play a role in embryonic development. Since receiving the treatment, Shelton has experienced signs of a full recovery — the new cells in his pancreas seem to automatically produce insulin at appropriate levels. However, the results have not yet been replicated in other patients. There has also been no investigation of any long-term adverse effects, nor do researchers know whether patients will require subsequent treatments. Vertex Pharmaceuticals’ research into stem cell treatment will continue in trials on 17 other patients over the course of five years.

Dr. Doug Melton, a biologist from Harvard University and one of the leaders of the study, had his first experience with diabetes in 1991 when his infant child began shaking and vomiting. After bringing their child to the hospital, Melton and his wife discovered that the infant had type 1 diabetes. Caring for his child with diabetes motivated Melton to abandon his frog development research in favor of investigating the disease to find any possible cure.

An obstacle in Melton’s research was funding for the stem cells, which are obtained from fertilized human eggs at fertility clinics. Federal funds cannot be used for research with human embryos, so Melton was forced to seek private funding from various private organizations and isolate his stem cell lab from all other Harvard facilities. The cost of research over 20 years has been about $50 million. After obtaining the funds, Melton’s team investigated different series of chemical stimuli to determine which ones would transform the stem cells into pancreatic cells. Due to the significant trial-and-error aspect of their experimentation, years passed before the team succeeded in making insulin-producing cells.

The discovery in 2014 prompted Melton to found his own company, Semma Therapeutics, to find a reliable method of mass-producing the pancreatic cells. The company then began trials in rodents and proved that the cells reliably cured diabetes in lab rats and mice. For human trials, however, the company needed a large budget and hundreds of employees to make sure their experiments complied with the standards of the Food and Drug Administration. The $950 million acquisition of Semma Therapeutics by Vertex Pharmaceuticals in 2019 allowed trials in human patients to begin.

Like other medical procedures and treatments in the United States, stem cell surgery will likely be expensive for patients. Vertex Pharmaceuticals, in particular, has a history of charging especially high prices, according to customers. In addition, if the treatment is approved by the FDA, all patients would be forced to take regular immunosuppressant medication to prevent the destruction of their new pancreatic cells. Immunosuppressants may have side effects in some individuals, so patients would have to evaluate the trade-off between a working pancreas and immunosuppression. Nevertheless, the treatment holds the potential to be a permanent cure for type 1 diabetes.

Pietro Stabile is a junior who lives in 1505 D-wing. He is excited to write for The Acronym and share his opinions with the world. Outside of writing, he is interested in computer science, math, and food.

First Woman in the World Cured of HIV