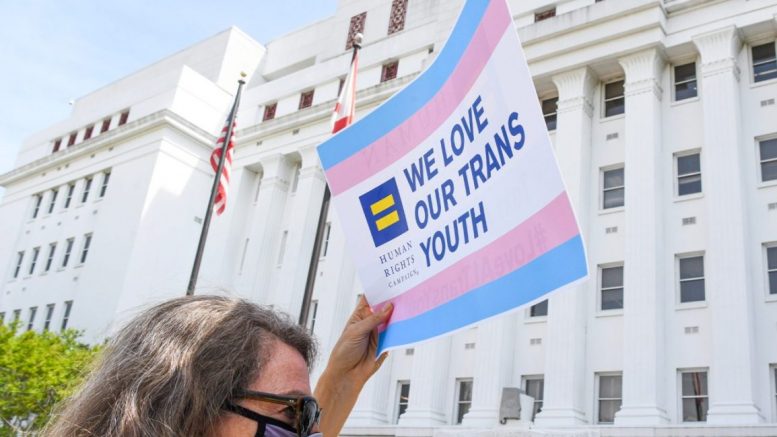 The fight for equal rights for transgender youth.

Arkansas became the first US state to ban physicians from providing gender-affirming treatment for transgender people under the age of 18. The General Assembly voted to override Republican Gov. Asa Hutchinson’s veto of HB 1570. The House voted 71-24, and the Senate confirmed the override of the governor’s veto by a vote of 25-8.

This new law pushes the trans community back several steps in their fight for equal rights. Especially in light of recent legislation prohibiting trans high schoolers from playing play on their school’s sports teams, these laws have sparked outrage in the trans community.

The new Arkansas law states that minors will not have access to puberty blockers, which block either testosterone or estrogen. Puberty blockers are a treatment for transgender children, as they prevent the onset of puberty.

The new law will also ban cross-hormone therapy, a gender-affirming treatment that allows transgender people to change their physical appearance to help with body dysmorphia. This particular treatment gives people aid to redistribute body fat to different parts of the body and either accelerate or slow body hair growth.

Although the law does explicitly go against gender confirmation treatments of any sort, it makes an “exception” for intersex people who have an unspecified chromosomal makeup and hormone production. It also makes an exception for those affected by difficulties from previous gender-affirming treatments.

“Some of [those kids] may choose to be transgender when they’re older. That’s OK, that’s their choice,” Republican Rep. Robin Lundstrum said in a House panel prior to passing the bill. Representative Lundstrum and other Republicans who are in favor of this bill and similar bills clearly do not know that being transgender is not a choice one makes. In fact, there’s evidence that tells us that the brain structure of a transgender person resembles the structure of the gender they identify with, not the gender they were assigned at birth. Therefore, a person who is assigned male at birth, but identifies as female, will have the structure of a female brain.

There are also studies that show us that the brain activity used as people perform certain tasks will look different depending on if a male or female is performing the task. The brains of transgender people have the brain activity of the gender they identity with and not the gender they were assigned at birth. These important studies should have been taken into consideration when the bill was being passed, especially since part of the bill excludes intersex people specifically because of their chromosomal makeup.

Many LGTBQ+ and medical advocates strongly oppose the legislation, which they fear can have significant negative impacts on trans youth. Trans youth are already at a much higher risk of suicide than others, and the passing of a bill like this may have a direct impact on that. If legislators took the time to listen to all of the scientific evidence–and not just pick and choose which pieces help their case best–it would benefit thousands of kids who are struggling.

Realizing you are transgender is a difficult and personal process, and it is a process that adults need to be prepared to help children with. An underage trans person should have the right to go to doctors, get hormone blockers, and safely discuss what is happening to them with a medical professional.

Clinical Trials Trace a Path to a Cure For Type1 Diabetes