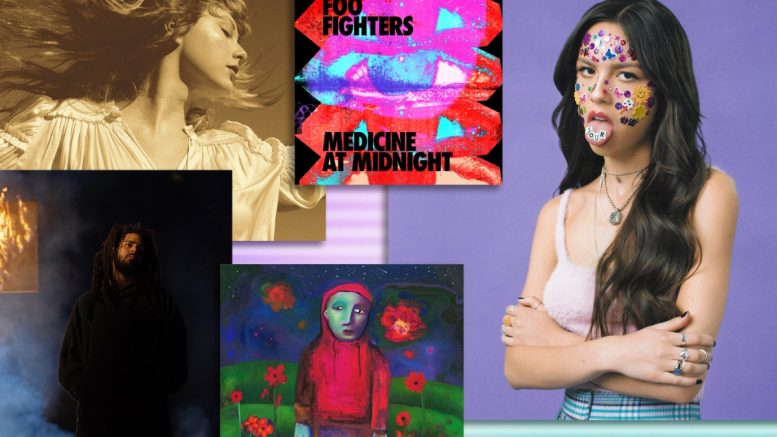 2021 was a huge year for the music industry with singers like Olivia Rodrigo giving us the heartbreak ballads we didn’t know we needed and artists like Adele gifting us with their long-awaited comebacks. Here is a look at four of the most popular albums of the past year.

The first release of SOUR, “driver’s license,” quickly became a hit at the beginning of 2021, breaking Spotify’s record for most streams in a day for a non-holiday song within three days of its release. The heartbreak ballad is now Spotify’s most popular song of 2021, amassing 1.1 billion streams. High School Musical: The Musical: The Series actress, Olivia Rodrigo, became a breakout star this year with SOUR, performing hits from the album at the BRIT Awards, Saturday Night Live, and most recently, the American Music Awards. SOUR was Spotify’s top album of 2021.

The second of Swift’s re-recorded albums was released in November of 2021 and included not only updated recordings of some of Swift’s most iconic songs, such as “I Knew You Were Trouble” and “We Are Never Ever Getting Back Together,” but bonus songs “from the vault” that never made it on to the original album, such as the full, ten-minute version of “All Too Well.” The re-recorded album had Swifties overjoyed to once again hear the nostalgic hits from nearly a decade ago and gave Swift a chance to take back an album that was rightfully hers.

30 by Adele was the biggest selling album of the year in the U.K. Globally, fans were pleasantly surprised to see Adele return to music with “Easy on Me” after a six-year hiatus. The hit was released in October and was inspired by the struggles the pop star experienced in her personal life through the past few years. Because of the success of “Easy on Me” and the second track of the album, “Oh My God,” and as of January 5th, Adele had spent eighteen weeks at No. 1 on the Billboard Artist 100 chart, making her the most popular artist in the U.S. at the time.

Lil Nas X went from having negative $5.62 dollars in his bank account to being the number one artist in the world after the release of his massive hit, “Old Town Road” back in 2019. He later came out as gay and has since become a strong voice for the LGBTQ+ community, advocating for gay artists to be able to express their sexuality through their music. His debut album released back in September, Montero, has a variety of focuses, including stories about people he has met in life, his mom and dad’s parenting mistakes, and giving hope to his depressed teenage self before coming out. It has been nominated for a Grammy for Album of the Year.

Be the first to comment on "The Albums that Shaped 2021"