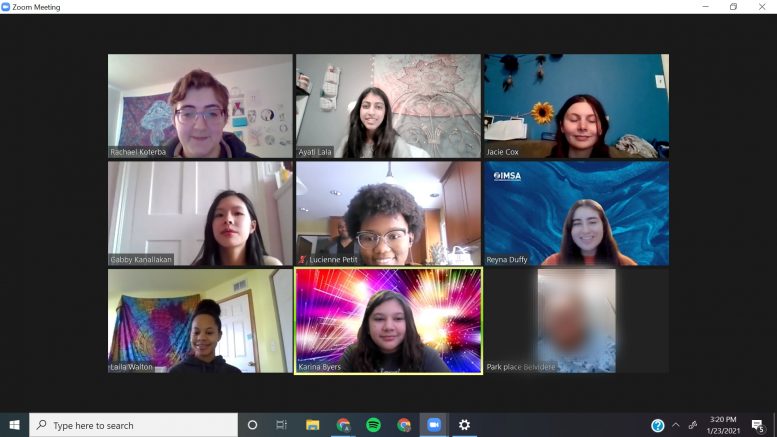 As we near the one-year anniversary of quarantine, it is important to reflect upon what has happened in the past ten months. 462,000 deaths, 26.9M total cases, a 9.4% positivity rate, and millions of students learning from home are just a few of the grim figures of the pandemic. Yet, the pandemic has brought about some good, too — a cleaner atmosphere, the reunion of work-torn families, and personal growth to name a few. Holistically, however, this one-dimensional outlook on the pandemic overlooks an important concern — senior citizens and nursing homes. Social distancing guidelines and mask mandates have constrained the typical connection seniors have with their peers, family members, and the environment, often leaving these individuals in dire need of conversation and social interaction. Recognizing such intimate feelings of isolation, a group of fifty-six members of the IMSA FBLA (Future Business Leaders of America) chapter banded together to create Conversations for Cheer, a project connecting IMSA students to local nursing home residents.

Becca Pae, a sophomore involved with the project, summarizes the project’s inspiration: “We’re so focused on our lives and what got taken away from us that we forget about these [nursing home] residents who are most likely seeing fewer people than we are right now.” Additionally, many of these seniors either don’t have access to technology or don’t understand how to operate these devices. Hoping to address these challenges, IMSA’s FBLA  established Conversations for Cheer.

The team started by brainstorming what their project would entail. The group thought about sending emails, sending cards, and working with the families of those at the nursing homes, yet none of these plans seemed the right approach. Days later, however, the team stumbled upon the idea of hosting virtual Zoom sessions, engaging with rich, dynamic discussions ranging from who would win the upcoming Super Bowl to the new-found passions of a seniors’ grandchildren. Those involved with the project were quickly captivated by the idea, soon getting confirmation from administrators and advisors. The team felt as if the project was something that both IMSA students and the elderly could gain from. According to FLBA leaders,

“Both seniors and students could benefit from this project. The elderly now have someone they can talk to, resolving their feelings of isolation and allowing for them to feel emotionally well. The students can now make someone’s day in just ten minutes and can get important life advice from someone who’s lived a lot longer.”

Inspired by the idea, the team marketed the project to IMSA’s student body, contacted local nursing homes, and decided upon the date of January 23rd to hold their event.

To ensure proper organization, students were divided into either random or chosen two-person groups, with each pair responsible for communicating with one another prior to the event. At the event itself, senior citizens logged in and were welcomed by a large group of students and advisors. Soon after, student pairs were put into their own breakout rooms with a couple of senior citizens, engaging in productive discussions. The event lasted for nearly three hours, from 1:00 PM to 3:40 PM, and each group had approximately ten minutes to converse with the senior citizens in their breakout room. Following the event, the team observed the rather rapid pace of the event, and took note of it, given the team’s ambitions to hold similar events in the near future.

In spite of technical difficulties, the group and nursing home seniors engaged with rich discussions regarding a span of topics — students afterward voiced the following:

“When we met Barb, we talked about her grandkids (it’s actually her granddaughter’s birthday party today). We also talked about some of her favorite foods and how her grandmother would make her food as a kid. She really liked the Swedish meatballs, bread, and flop that her grandma would make. We also talked a little bit and the tv shows that she liked watching and her previous job as a beautician. All in all, I really liked talking to Barb and I would love to do it again.”

“It was a great project and I would love to do this another time.”

“Overall, I had a pretty good experience even with the technical difficulties.”

“The conversation flowed really smoothly, and we had a chance to learn a lot about Randy.”

“My experience was good and I thought I learned a lot about how difficult it is currently in this COVID situation for senior citizens. I thought this event not only taught me a lot but also made the seniors a lot happier.”

The important work IMSA’s FBLA chapter has engaged with this year, amidst a raging pandemic, has set a standard for not only future FBLA chapters but also IMSA as a whole, reminding us that even a pandemic can’t stop people from giving back to their community.

Giving Back to the Community with FBLA

Unity and Community: A Data Analysis of the Social Network of the Class of 2020

Be the first to comment on "A Look Into “Conversations for Cheer”: IMSA’s FBLA Community Service Project"