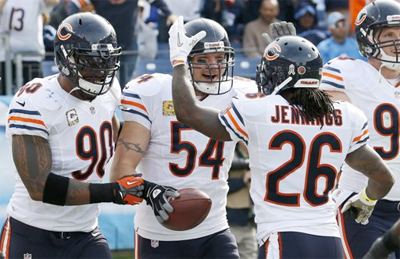 Most teams have had their bye weeks and everybody is bracing for football in the winter. With that comes a customary decline in offensive production. Which teams will be effected most? Your guess is as good as mine. In any case, I present to you the Week 10 Power Rankings and as usual, nothing has really changed at the top. As always, Mason Dearborn wrote for the even ranked teams and I wrote for the odd ranked ones.

They were so close to losing my vote as #1 but, in the end, they managed to win the game.

The final showdown, the second and third teams in a faceoff to prove how good each one is.

Too much defense and just enough offense. If Jay Cutler ever plays well, this team will actually be unbeatable.

The 2-loss 49ers get to play the Bears in two weeks after an easy game against the Rams.

What is most amazing is that, despite their sluggish start, Aaron Rodgers leads the league in touchdown passes.

Losing to the Steelers gives the Giants three losses, but they are much better than their performance against the Steelers indicates.

Joe Flacco needs to play better if they expect to beat elite teams.

With Mendenhall and Dwyer healthy, the Steelers’ run game can keep up their good work.

The acquisition of Aqib Talib should bolster their porous secondary. I’m predicting a 7-1 record post-bye week.

Peyton Manning for MVP?  Who would have thought it?

Though they were run over by Adrian Peterson, the Seahawks won because Christian Ponder apparently had amnesia concerning what it means to be a quarterback. But hey, a win is a win, right?

Andrew Luck gave himself a C grade for the first half of this season and then proceeded to shave his head in support of his coach, Chuck Pagano. You would not even have thought they won this week and are building towards a wildcard berth.

I don’t like the fact that an old Michael Turner can run all over them.

They thoroughly thumped the Eagles and in the process possibly saved their season.

The Bengals were close to beating the Broncos; that counts as a win.

The run defense they used to brag about has turned against them, just ask Doug Martin.

It seems like whenever Brian Hartline plays well, they lose. I’m not quite sure what that means.

A win over the Chiefs similarly means nothing.  Look back two weeks and make your judgment.

After Week 17, “Mr. Reid, I regret to inform you that your services are no longer needed.”

You know the bottom half of the league is bad when a team can jump three spots in our rankings without playing a game.

The Texans steam-rolled the weak Bills with a sick Arian Foster scoring two touchdowns.  Good luck against the Patriots, they are going to destroy that defense.

Yes, they are still dangerous because of RGIII. No, they are not good.

How did the Browns get this high? Mainly, look below them. Also, they made the game against the Ravens competitive.

Nobody played that well but they still won. Only a slight deviation from the story of the entire season for them.

Fumble-machine Chris Johnson and the Titans had no chance against the Bears’ defense.

The bye week they had last week is not going to help them get any better, sorry.

Things look pretty bad with Darren McFadden and Mike Goodson both getting hurt in one game, but at least McFadden can hopefully return soon.

Another week, another loss and there is nothing they can do about it. Their Cleveland game on December 9th cannot come quick enough.

To people who don’t put them in last, how can a team give up 4 rushing touchdowns to a mainly passing team?  That’s just awful and they should be ashamed of themselves.

Be the first to comment on "NFL Power Rankings: Week 10"