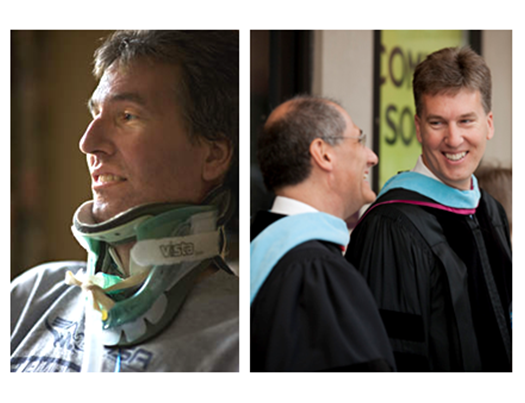 The Acronym had the privilege to ask Dr. McLaren about his time at IMSA and his current happenings through e-mail correspondence. Although brief, it was an interesting experience to talk to someone who made such an impact on IMSA, including the Class of 2015 who has yet to meet him.

When IMSA first opened in 1986, Dr. McLaren began by working as a residential counselor, later becoming a head counselor. We discussed Dr. McLaren’s time as a member of the Res. Life staff.  Having lived on campus for four years, he stated that he has many fond memories with students and staff members. He mentioned that many of these stories have come up at class reunions, exemplifying the bond  that Dr. McLaren has with his students and coworkers.

In this year alone, many events have been established at IMSA, such as the Sockless Day of Solitude, to honor Dr. McLaren because of his predilection for not wearing socks. Furthermore, the Lap the Lake event raised money and awareness for ALS research.  Dr. McLaren’s children’s college and the Skyrise Willis Tower climb on Sunday, November 4th will raise over $2,000.

In response to all of everything IMSA has done for him, Dr. McLaren expressed his enthusiasm by saying “Spark is wonderful!” He also mentioned the work students have been doing in SIR, studying ALS along with Parkinson’s and Alzheimer’s in an effort to achieve a goal of helping treat such diseases. “The answer is in the science,” he reiterated from an article in the Aurora Beacon News, showing his adamant belief in scientific research.

When asked he felt about the publicity he has gotten recently, specifically through an article in Beacon News, Dr. McLaren responded modestly.

“The articles were nice, but too much focus on me.” he said. ” The real story is about my three friends running the New York City marathon and raising significant funds for Project ALS.”

Even in sickness, his thoughts don’t lie on himself, but on helping other people, which truly goes to show how dedicated he is to promote IMSA’s mission statement to “advance the human condition.”

Dr. McLaren continues to optimistically fight ALS. He strives to push through it and continue his work. Though no longer physically present on the IMSA campus, Dr. McLaren’s legacy continues. He also still holds the position of Vice President of Academic Affairs for IMSA. He is currently working on four projects with Dr. Max McGee, President of IMSA.

IMSA continues to create opportunities to support Dr. McLaren and ALS research through fundraising, awareness, and various events. It is a noble cause for an important figure who truly made an impact on the school and, consequently, the scientific world.

Be the first to comment on "A Word with Dr. McLaren"