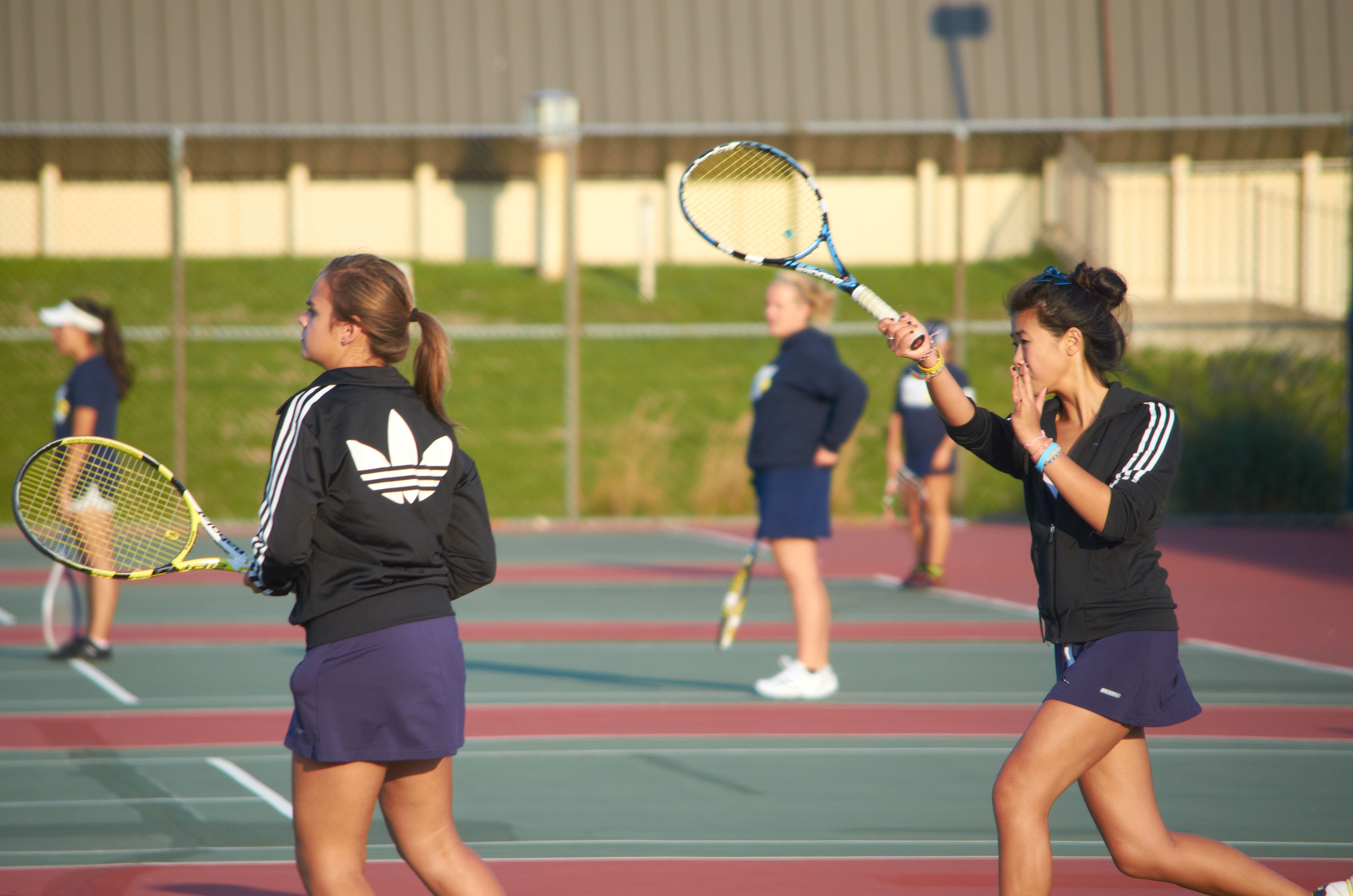 doubles partners Madison Schroeder and Lynette To advancing to the net

Though this year’s girls faced many challenges throughout their season, they were able to overcome the difficulties set in their path and come out as a strong team of accomplished tennis players. Several highlights of this year’s IMSA girls’ tennis team included taking two strong doubles teams and two skilled singles players to Sectionals, as well as ending the season with an undefeated player.

With a majority of last year’s varsity team having gone off to college, this year’s team relied on the returning skilled upperclassmen and the talented incoming sophomores. Returning varsity players were seniors Madison Schroeder and Rheanna Vimawala and juniors Nahee Park, Emily Ling, Atene Poskute, Lynette To. These athletes, combined with the hard work of other returning players reshaped the IMSA girls’ tennis team into a strong, bonded, and hard-working group of tennis players.

Nevertheless, several injuries kept some of the varsity team’s main players from participating in multiple competitions throughout the season, leaving the entire team at a disadvantage.  With lower ranked players often having to play at higher positions becoming a regularity, it was difficult to keep up with the high expectations set for the team due to last year’s victorious season.  Despite these difficult situations, each and every varsity athlete played to her best abilities and was able to lead the team to multiple victories. In the end, doubles partners Nahee Park and Emily Ling, and Atene Poskute and Mayuri Yasuda, as well as singles players Rheanna Vimawala and Renu Varadeeswaran represented IMSA at this year’s Girls’ Tennis IHSA Sectionals. These girls fought long and hard, winning several matches along the way. However, they came up just short of sending their first doubles team to State.

JV had a magnificent season, finishing with only one loss and an undefeated player, Emily Mu.  Coach Lundgren pushed his team to their limits, morphing individual, mediocre players into a strong and united team. When talking about goals for next year, Coach Lundgren says, “Goals for next year are to have a stronger tactical mind during all matches. Work heavier on the tactics during practice along with skill. Work harder on physical skills and conditioning in practice to have more opportunities to win at matches, tournaments and eventually state.”

Hopefully the combined skills of Coach Lundgren and Coach Bernardini will lead our girls to reach these goals and improve their game one step at a time in time for the major tournaments, including Sectionals and State.

Juniors, Are Sports Really Helping You?

The Most Unlikely World Cup