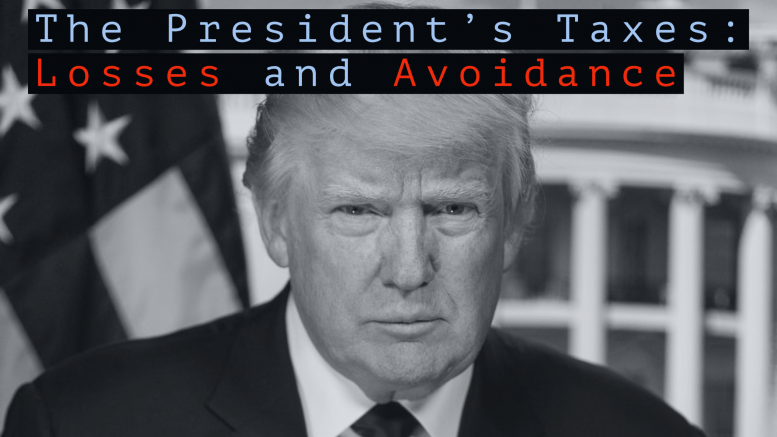 That’s how much money President Donald Trump paid in federal income taxes in 2016, the year he won the presidency. For years, Donald Trump has refused to show the public his tax returns and now, we might finally know why:

The New York Times got its hands on President Trump’s taxes exposing staggering business losses, crushing personal debt, and a tax bill that constitutes only a fraction of what the average American family pays. When asked about it on the September 29 debate, Trump denied everything, saying that he paid “millions in taxes.” 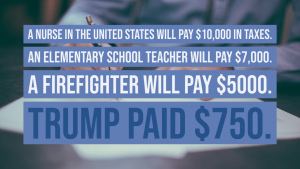 While over one hundred million Americans shell out money to the IRS every April, the president works his way around it. Out of the 18 years examined by the paper, Trump had paid no income taxes at all in 11 of them “largely because he reported losing much more money than he made.” However, the paper accuses the president and his companies of claiming questionable deductions. The article uncovers that among the write-offs Trump has taken over the years, he dedicated more than $70,000 for haircuts while on The Apprentice, almost $96,000 for Ivanka Trump’s favorite hair and makeup artist, and nearly $2 million for Trump and Donald Trump Jr.’s legal defense for the Russia inquiry. Moreover, he wrote off more than $109,000 for linens and silverware and nearly $200,000 for landscaping at Mar-a-Lago. Trump reported $26 million in “unexplained consulting fees” some of which were given to Ivanka Trump. This raises some serious red flags because she was also an employee of the Trump organization. This isn’t just ethically wrong, like writing off too much money to hairstyling; it could be illegal.

The author of The Art of the Deal and a reality TV star, Trump has always campaigned as the businessman who would “make America great again.” The results of the New York Times investigation shatters that image and reveals that Trump’s empire is seriously struggling. According to The Times, most of the president’s main businesses, including his golf courses and hotels, report losing millions, if not tens of millions, repeatedly. In 2018 alone, the Times indicates that documents show the president reported losses totaling up to more than $47 million.
The president faces a personal debt totaling $421 million which could come due while he’s still in office if he’s elected to a second term. If Donald Trump does win a second term, his creditors will come asking for their $400 million during his presidency. This presents a serious conflict of interest; the president’s decisions for the country shouldn’t be influenced by his deep financial troubles. In fact, usually significant delinquent debt disqualifies people from obtaining a government security clearance because of how it could be used as a point of leverage.
Trump has repeatedly claimed when asked to show his tax returns that he is under an ongoing audit. The audit he has been alluding to is, in truth, an investigation into the legitimacy and legality of an income tax refund totaling $72.9 million he claimed and received in 2010. If he loses the audit, Trump could owe the IRS over $100 million in penalties.
In the first of the 2016 presidential debates, when Hilary Clinton questioned Trump’s refusal to show the country his tax returns and explained that when he applied for a casino license it was revealed that he had paid no federal income taxes, he responded with “That makes me smart.“

This raises the question: is it smart to not pay taxes or is it unpatriotic?

History would indicate the latter due to the importance of taxes for the federal government and the conduct of past presidents. Presidential tax returns show that during the first year he was in office, Ronald Reagan paid $165,202 federal income taxes, George H.W. Bush paid $101,382, Bill Clinton paid $62,670, George W. Bush paid $250,221, Barack Obama paid $1,792,414, and Donald Trump paid $750.

Now with voting for the 2020 election already underway, we need to consider if, in unprecedented times like these, we want a “smart” president who will weave his way out of doing the best for his country. When the numbers point to the conclusion that Trump only ran for the presidency to “reanimate the marketability of his name,” it becomes a matter of democracy and American values. Do we want Trump’s decisions to be influenced by the anonymous creditors of his $421 million? Is transparency of personal finances – something that we’ve seen in the Democratic presidential candidate, Joe Biden, and his VP, Kamala Harris – something that we value? Do we want a president that will contribute more to other countries than his own? More importantly, if Trump can get away with paying as little as he does, who else is doing the same? Is he just the symptom of a broken economy allowing for the wealthy and well-connected to find ways to cheat the system? And if he is, what are we going to do about it this November?

Pizza Shops and QAnon: Disinformation in a Digital Age

Be the first to comment on "The President’s Taxes: Losses and Avoidance"