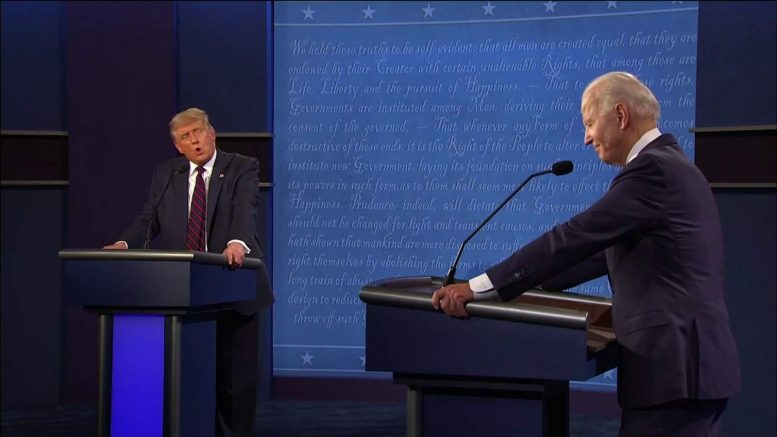 On September 29, Republican incumbent Donald Trump faced off against Democrat and former Vice President Joe Biden in Cleveland, Ohio in the first 2020 Presidential debate. The candidates traded blows on topics including the pandemic, racial tension, the economy, and election integrity. President Trump repeatedly interrupted moderator Chris Wallace, while Biden called Trump a racist, a liar, and a clown.

Trump refused to denounce white supremacy in America. White supremacist groups in America have counter-protested Black Lives Matter protests, and many members of these groups support Trump. When asked by the moderator to condemn white supremacy, President Trump addressed the Proud Boys, a neo-fascist and far-right organization with ties to white supremacists, by saying, “Stand back and stand by.”

Biden and Trump discussed the COVID-19 pandemic, which at the time of the debate had killed more than 200,000 Americans. Trump mocked Biden for wearing a mask often and stated that millions would be dead if Biden had handled the crisis. In the days since the debate, Trump and several members of his administration have tested positive for COVID-19. Biden asserted that Trump had no plans to combat the disease, while Trump continued to blame the virus on China. On the topic of reopening the economy, Trump asserted that staying shut down would harm the economy further, while Biden stated that only billionaires benefited from the early reopening and that workers were harmed by it.

Trump spoke out against mail-in ballots, claiming that they exacerbated voter fraud. He alluded to his earlier threats of not accepting the election results, and encouraged his supporters to “go to the polls and watch very carefully.” Biden countered that mail-in ballots had been used for decades and were proven to be safe. He emphasized the importance of letting people vote on their own terms due to the virus.

Towards the end of the debate, the issue of climate change came up. Biden discussed his plans for a two trillion dollar investment in clean energy and described Trump’s ignorance of climate science and his removal of the USA from the Paris Climate Accords. Trump mentioned the California wildfires and proposed a bizarre plan to clean the forest floors to avoid forest fires. When pressed by Wallace on whether human industrial emissions caused climate change, the President gave a nonchalant answer and continued to emphasize the importance of forest management.

How COVID-19 Is Affecting The 2020 Elections

In Search of a Third Party