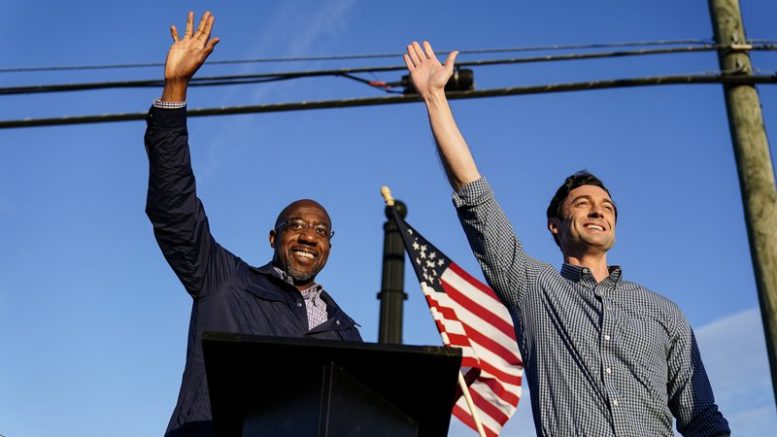 Lately, everyone has been fixated on what is going on in Georgia. Well yes, the Georgia Bulldogs are doing pretty well in college football, boasting a 6-2 record at the time of the writing. And yes, there has been some drama regarding the results of the 2020 presidential election in the state, where officials have begun a second recount after certifying President-elect Biden’s narrow win over President Trump just days prior. However, that is not the most important reason as to why Georgia has been making headlines this year. Right now, all eyes are on Georgia’s two runoff elections for its U.S. Senate seats, one pitting Republican freshman Kelly Loeffler against Democrat Raphael Warnock and the other featuring Democrat Jon Ossoff versus Republican incumbent David Perdue.

The two runoff elections were the result of a special election rule in Georgia regarding state and congressional offices, mandating that an additional, runoff election between the top two candidates must take place should no one earn at least 50% of all votes. If the Democratic and Republican nominees are locked in an extremely tight battle for the Senate seat, a third-party candidate can absorb just enough votes so that neither candidate reaches the required absolute majority of the votes. The 2020 election saw exactly that in Georgia’s nail-biter of an election. On the presidential side of the election, Biden managed a win over Trump by only 0.2% of the total vote. The Senate elections were no different, as Perdue barely scraping by with 49.7% of the vote compared to Ossoff’s 47.9%. Loeffler, running in a special election after being appointed the interim successor to former Senator Johnny Isakson, fended off Republican challenger Doug Collins and 16 other candidates with 25.9% of the vote, while Warnock took the top spot with 32.9% of votes. As no clear favorite emerged from either election, the top two candidates from each election are poised for another showdown on January 5th, 2021.

The two elections will decide Congress’ composition for the next two years, as they can sway the Senate towards either party. As of now, Republicans have control over 50 Senate seats compared to the Democrats’ 48. If both Warnock and Ossoff win their elections, Democrats will control 50 seats in the Senate, which would give them the majority, given that Vice President Kamala Harris is a Democrat herself. However, should either race tip towards the Republicans, they will retain control over the Senate for at least two more years.

Such control will be vital for Republicans, as they seek to contest potential nominations and policies from the Biden administration. Progressive action would most likely be blocked, as Biden would not be able to convince Republican senators to side with him on such issues. Similar to the latter half of Obama’s presidency, a Republican-controlled Senate can greatly hinder the Democratic-controlled White House from achieving their goals.

For Democrats, Senate control would mean the opportunity to implement major changes such as restraining large tech companies from engaging in predatory business practices and push through cabinet nominees more easily. While some Republicans, such as Senator Collins of Maine and Senator Romney of Utah, have signaled their willingness to work with Democrats on some issues, having a majority in the Senate would give much more breathing room to the Biden administration to implement potential changes and avoid Republican roadblocks.

Traditionally, Georgia’s runoff elections feature a much smaller voter turnout compared to the presidential election and have consistently leaned towards the Republican Party. As runoff elections do not align with other major elections such as the presidential race,  fewer voters actually cast ballots in them. Additionally, for many Democratic voters, a Biden victory may mean that they think that their mission as a voter has been accomplished, thus driving down voter turnout in the upcoming runoff elections. In fact, Republican vote share margins have increased even with lower turnouts. This was the case for past runoff elections, in which seven of the eight previous runoffs since 1988 in the state have tilted Republican when featuring both a Republican and Democratic candidate. Democrats have also failed to capture any statewide seat in Georgia since 2006, marking a long-term drought for the party in a traditionally Republican state.

Yet, not all hope is lost for Democrats: this year’s election can prove to be different. On the national stage, Biden’s victory in Georgia was historic, marking the first time a Democrat has won the state since 1992 and the highest vote share in the state since 1980. Additionally, Democrats achieved remarkable successes in the 2018 elections, losing narrowly in the gubernatorial election under suspicious circumstances and remaining highly competitive in a runoff election for the position of secretary of state. Recent successes by the Democratic Party can be attributed to a variety of factors, ranging from dissatisfaction towards Trump to a diversifying population in major cities. This momentum has clearly been carried into the 2020 election, boosting Biden’s campaign and pushing him to victory within the state.

Furthermore, Perdue and Loeffler are involved in scandals of their own regarding possible connections to insider trading following a briefing regarding the COVID pandemic. Even though the Senate Ethics Committee dismissed their investigation into the stock trading, Loeffler and Perdue’s transactions, worth millions of dollars each, have heavily damaged their reputations and set them up for a fierce fight in the upcoming election with their Democratic challengers.

All eyes are on Georgia. Democrats and Republicans continue to scramble to campaign, advertise, and persuade in order to wrestle for control over the Senate. No matter what the results are following the election, these two races will prove to be extremely influential to Biden’s initial years as president.

Be the first to comment on "All Eyes On Georgia"