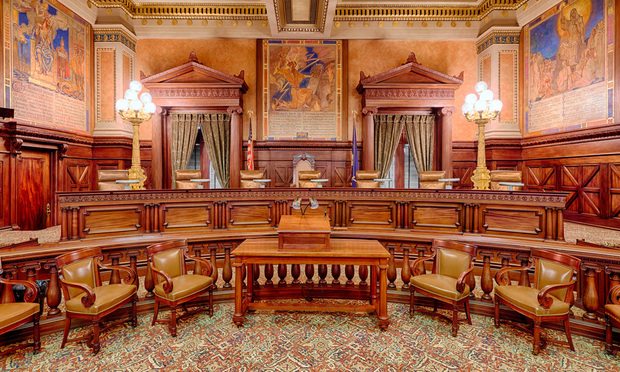 The Sumpreme Court Camber in Harrisburg, Pennsylvania by Shutterstock

With the United States Presidential election at an end, President-elect Joe Biden is set to be inaugurated as the President on January 20th, 2021. However, President Donald Trump has yet to accept this result and concede, as prior losers in presidential contests have done. Instead, Trump is attempting to take legal action against some states with hopes that the results will be reversed and will stay for a second term. These states are Arizona, Pennsylvania, Michigan, Nevada, and Georgia:  all battleground states. While this article includes 12 of the lawsuits, it should be noted there are more than this and the number is subject to change.

President Trump has taken the most legal action in Pennsylvania, with around five state court cases and two federal court cases, which may be due to the state carrying twenty electoral votes. Out of these seven cases only one has gone through, overturning guidance released by the Pennsylvania Secretary of State that would allow ballots with issues to be fixed 3 days after the usual due date; However, this would only toss out a small number of ballots. Two cases on appeal would have allowed poll watchers to be closer, the other throwing out around 8,000 based on information on the mail-in envelopes. In the other two state cases, the Trump campaign was denied 592 ballots to be thrown out based on the validity of the envelopes and the other is currently pending to throw out around 900 ballots from Bucks county.

On the Federal level, the Trump Campaign has settled a lawsuit that sought to stop the count of ballots on the basis that not all poll watchers were allowed in the counting room. It was settled when the campaign’s lawyer admitted that some observers were allowed to watch. The other federal lawsuit is still pending, which seeks to prevent the certification of the Pennsylvania’s election results. The Trump campaign claims that the ballots weren’t treated the same throughout all counties and a large amount of mail-in ballots were unlawfully counted. Earlier in the case, a postal worker, who has walked back on the claims, claimed his supervisor tampered with the ballots. The state of Pennsylvania predicts the case will be ruled in favor of them due to lack of evidence from the Trump campaign.

In Michigan, one state and one federal lawsuit have been filed. On the state level, the Trump campaign requested to stop the count of absentee ballots by claiming observers had a right to see video surveillance footage of the ballot delivery before they were counted. The claim was based on a poll watcher’s claim that ballot dates were changed, this was proved to be false, and that no law was presented that cites video footage must be shown to observers. In the federal courts, a pending lawsuit seeks to prevent the certification of Michigan’s results. Evidence cited that observers had witnessed abnormalities and had not been allowed to watch the count. However, there is little to no concrete evidence proving fraud in Michigan’s election.

The only lawsuit filed in Georgia was a state court case that sought to divide 54 mail-in ballots that arrived after the deadline in Fulton County. This case was dismissed due to there being no concrete evidence that the ballots arrived late since the claim was filed based on claims from a poll-watcher. In addition, due to the election being close enough, a recount was ordered by the Trump campaign. However, it is predicted that this recount would not make a significant change to Georgia’s election results.

The only federal lawsuit relating to Nevada’s election was not filed by the Trump campaign, but they did promote the lawsuit. This case was brought against Clark County to prevent the use of signature-matching machines and claims that poll watchers had not been allowed to watch the count. The case was dismissed due to a lack of evidence. It is unclear if this would have significantly if at all, changed the election results.

The Trump campaign filed a lawsuit against Maricopa County to prevent them from certifying their results and to review all over-votes. Trump campaign lawyers had cited that Republican voters were encouraged to mark their ballots with Sharpie, making their ballot invalid. These claims have been proved to be false, as poll workers stated ballots marked in Sharpie were still counted. As of now, the campaign recognized the case was moot due to the margin difference between Biden and Trump being too great to make a difference.

In summary, it is safe to assume that Joe Biden will be inaugurated in January as our next president, regardless of the lawsuits filed by Donald Trump.

Amber Heard and Johnny Depp: A Trial of Defamation