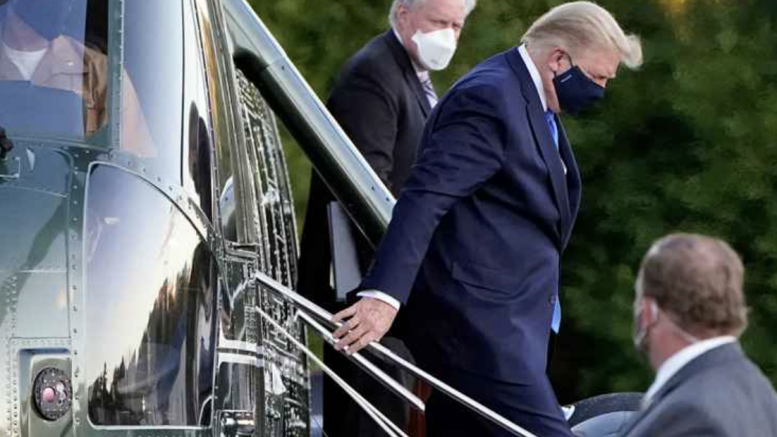 Trump, along with at least 34 White House personnel, have tested positive for coronavirus.

Here is the timeline covering the most notable events during the White House coronavirus outbreak:

Despite recently being in contact with Hicks, Trump decided to continue with his fundraiser at his golf club and travel to New Jersey. White House officials later said they discovered Hicks tested positive after Trump already boarded his helicopter, but Trump still gave his speech in New Jersey. There was a lot of controversy over this decision as Trump could have potentially endangered the attendees at his fundraiser. Press Secretary Kayleigh McEnany assured there was no reason for Trump to wear a mask because the event was outside and a sufficient amount of social distancing was maintained.

Later that day at 11:54 pm, Trump tweets that he and his wife Melania have coronavirus.

White House Chief of Staff Mark Meadows said on October 2nd Trump had already boarded Marine One when Hicks’s diagnosis was confirmed, but other agencies affirm Trump knew prior to boarding.

Press Secretary Kayleigh McEnany said on October 4th that the White House will not be releasing the number of White House staffers that tested positive for coronavirus, saying “We take seriously safeguarding the information of personnel here in the White House”.

Trump was discharged from Walter Reed on October 5th.

During the time frame shortly before Trump tested positive, Trump attended rallies, campaign events, and fundraisers. Traveling with his committee, Trump transmitted the disease to various members working within the White House. 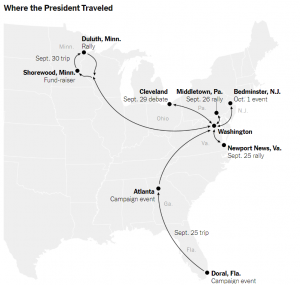 Where the President Traveled | Source: nytimes.com

Besides the New Jersey fundraiser, Trump faced the most criticism for attending rallies in Atlanta and Minnesota, which a USA TODAY study claims exposed thousands of Americans due to the close contact with the committee members.