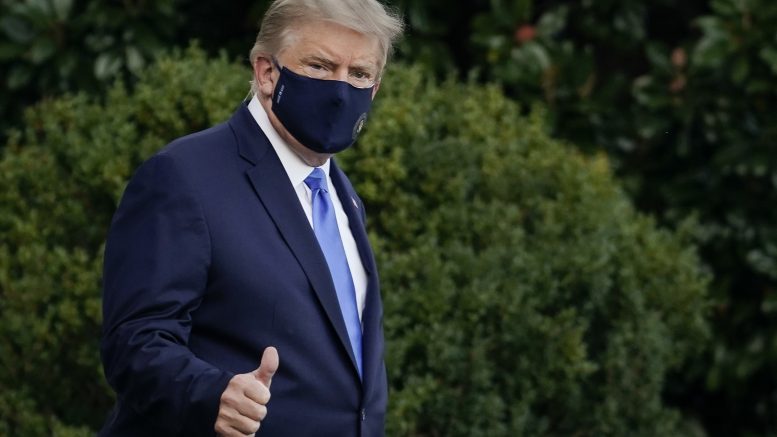 On October 1st, Donald and Melania Trump were diagnosed with COVID-19, just over a month from the most volatile election in recent memory. Following President Trump’s tweet announcing his diagnosis, media outlets were filled with breaking news, controversies, and jokes as the news spread and other White House officials tested positive.

Trump first announced news of his diagnosis on Twitter at 11:54pm on October 1st, saying, “Tonight, @FLOTUS and I tested positive for COVID-19. We will begin our quarantine and recovery process immediately. We will get through this TOGETHER!” This tweet got 415.1K retweets and 1.8M likes. This news came shortly after the announcement that advisor Hope Hicks tested positive for the virus. The day after, Trump was transferred to Walter Reed Medical Center, where he underwent experimental treatment. Kayleigh McEnany, the White House Press Secretary, announced that the visit was due to “an abundance of caution” as the president faced “mild symptoms.” These events ironically occurred after Trump had mocked Joe Biden for wearing a mask at the presidential debate, saying Biden would wear a giant mask if he was 200 feet away from another person.

According to Trump and his doctors, the president has made a speedy recovery. On October 3rd, a day after his admittance to the hospital, Trump tweeted, “Doctors, Nurses and ALL at the GREAT Walter Reed Medical Center, and others from likewise incredible institutions who have joined them, are AMAZING!!! Tremendous progress has been made over the last 6 months in fighting this PLAGUE. With their help, I am feeling well!” Just two days after the previous tweet, he announced, “I will be leaving the great Walter Reed Medical Center today at 6:30 P.M. Feeling really good! Don’t be afraid of Covid. Don’t let it dominate your life. We have developed, under the Trump Administration, some really great drugs & knowledge. I feel better than I did 20 years ago!”

Sparking much controversy, Trump drove around in a car during his hospital stay to wave at spectators. Shortly after his return to the White House, he was pictured outside, mask off, again waving.

This is my third year on the Acronym! I currently serve as the Co-Editor in Chief. I love writing and editing for Acronym, it's been my passion for so long. I am currently a senior at IMSA and I live in 06B!

Be the first to comment on "Trump and COVID-19 : An Overview"