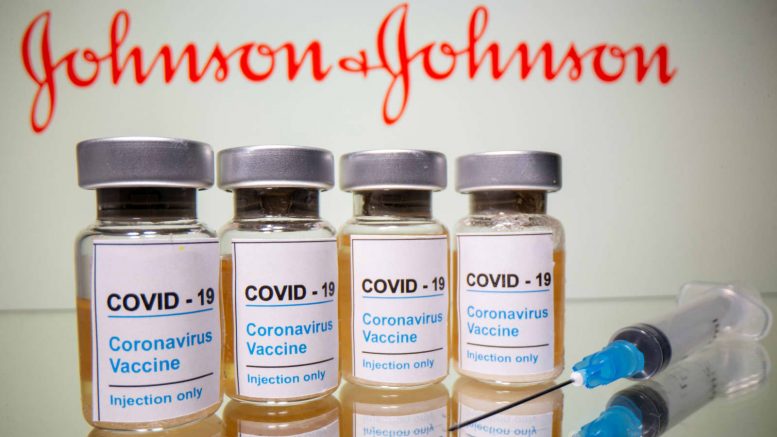 Covid-19 vaccines with Johnson and Johnson logo by Dado Ruvic

On February 27th, the U.S. Food and Drug Administration(FDA) issued an emergency use authorization (EUA) for Johnson and Johnson’s COVID-19 vaccine, making it the third vaccine to be approved for use in the U.S. The FDA used the EUA after evaluating that with the current data available, the Johnson and Johnson vaccine is effective against coronavirus. This approval allows the vaccine to be distributed for those who are 18 or older.

In their testing of the vaccine, Johnson and Johnson conducted a trial between 39,321 participants, with half receiving the COVID-19 vaccine and the other half receiving the placebo to test effectiveness. The vaccine has been found to be 66% effective against COVID-19 symptoms, 85% effective against severe coronavirus cases, and 100% effective in preventing death due to COVID-19. So far they have promised to give 20 million vaccines to the United States by the end of March, with some cities already receiving their vaccines. Here are the FDA advisory briefing notes, that contains data

However, the Johnson and Johnson vaccine’s efficacy rate is significantly lower than the Moderna and Pfizer vaccines’ 95% efficacy rate, raising concerns among the general public. This has led to some situations where local leaders, such as Mike Duggan, the Mayor of Detroit, have criticized the lower efficacy rate when comparing to the other two vaccines, despite choosing to receive them.

While the efficacy rate is important when considering which vaccine to take, leading health experts say that the most important factor is that all three vaccines are 100% effective at preventing death from COVID-19 and lowering hospitalizations. With that in mind, health officials are encouraging people to get any vaccine they are able to get. For example, Dr.Fauci states this in a White House Press Briefing. In addition, there are other possible factors that may play into the lower efficacy rate of the Johnson and Johnson vaccine, such as the fact that the phase three trials took place during December and January when COVID cases and transmission increased dramatically, resulting in testing conditions that aren’t comparable to Pfizer and Moderna’s. In addition, one of the advantages of the Johnson and Johnson vaccine is that it has already been tested against two additional variants, one originating from South Africa and one from Brazil, while Moderna and Pfizer are only just beginning to research the effectiveness of their vaccines against the COVID-19 variants.

Some religious leaders are criticizing and discouraging the Johnson and Johnson vaccine due to the company’s use of cell lines derived from aborted fetuses around 35-50 years ago in their production. In response, higher religious officials at the Vatican stated that it has been decades since the original cells were harvested, so there isn’t a compromise of morality. They encouraged people to get the Johnson and Johnson vaccine if needed.