The COVID-19 pandemic has upended many sectors of daily life, and the economy is no exception. Understanding the components of the current economy is important, specifically why the stock market is doing so well, how the U.S. response to COVID-19 relates to changes we’ve seen in the financial sector, and how a sustainable recovery is possible.

Why is the stock market doing so well?

S&P 500 index over the past 6 months | Source: Tradingview.com

The S&P 500 and the Dow Jones Industrial Average are solid indicators of the stock market’s state. Both indices have made a profound recovery after hitting lows in late March/ early April. Each of the reasons to be presented has been generally accepted as providing at least minimal influence in the stock market’s recovery; however, the magnitude of their influence is open to debate.

Rampant unemployment devastates economies, but the current state of the economy is at first glance not entirely clear.

The United States has experienced a Gross Domestic Product (GDP) percent change of -4.8% for the 1st quarter of 2020. This draws similarities to the Great Recession of ‘08, but the 1st quarter was only heavily influenced by COVID-19 during the month of March, implying the second quarter will show a greater change.

The S&P 500 is usually a solid indicator of the state of the economy, but the federal reserve has played a large part in this by providing stimulus through an increase in their assets. The federal reserve has increased its assets by more than 3 million over the past year, with the majority of this increase being after March in response to COVID-19. The federal reserve has also slashed interest rates to zero in an attempt to stimulate the economy. Because the Federal Reserve has caused more money to go in circulation surrounding businesses, the stock market understandingly performed better, though some analysts believe the actions by the Federal Reserve are only harming the future of the U.S.

FOMO stands for “fear of missing out” and contributes to the rise of the stock market by encouraging irrational investment decisions. 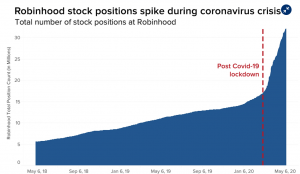 In recent months, the emotional toll on U.S. citizens has caused many novice investors to take part in investing. Many Americans are unsure if they will remain financially stable, so a myriad opened up brokerage accounts hoping to capitalize on the booming market. Robinhood has been one of the most popular online brokerages, gaining a record 15 million stock positions in a 3 month period. Novice investors have been shown to make riskier investments, including buying put options and overvaluing near-bankrupt level stocks. More risks may be taken because the investors are unsure of their future and want to essentially gamble their way to riches. Inexperience and emotion are the cornerstones of the FOMO argument.

Other opinions encompass a more optimistic view regarding the thriving stock market. These notions can basically be summarized as the stock market is the predictor for what is to come 6 months in advance, not necessarily the reflection of the current economy. The market was originally created for farmers to predict crop activity for the next harvesting season, and this intrinsic aspect of delay is still carried to the present day. This makes sense because investors want to look into the future, and those who are buying stocks are confident the economy will make a quick recovery. It is important to note however that consumer confidence does not directly correlate with the economic state, and the stock market is not the same as the economy.

Governmental response to Covid in the U.S.

Besides what has already been mentioned (namely the Federal Reserve cutting interest rates and increasing their assets), the U.S. government has taken numerous steps in an attempt to ease the economic tension.

As of this writing, the U.S. has had more than 4 million cases of COVID-19.

As of July 24th, the 7 day moving average of new cases was 66,960. The pandemic has not receded in the U.S, because the moving average of July 24 is the highest it has ever been for COVID-19. While Dr. Anthony Fauci, a primordial member in the White House’s coronavirus task force, explains the average age of those infected with COVID-19 has dropped by approximately 15 years over the past few months, a single cause for this occurrence is not manifest. There are numerous influences at play effectuating this trend: young people have had easier access to testing, young people have returned to work during openings, and young people may believe their youth protects them from the health risks of COVID-19.

Premature reopenings will only accelerate the spread of COVID-19 and subsequently cause closures once again. These “re-closures” have already been occurring in states where infections and hospitalization rates are rapidly rising, so the initial reopening in these states proved to be detrimental to the economy. Tackling the mountain of a decision of when to reopen is no easy task, but it will be best accomplished by listening to unbiased scientists.

Be the first to comment on "Economic Overview of Summer 2020"