It has been almost two months since the death of George Floyd. When not focused on the damage caused by COVID-19, headlines have been dominated by reports of Black Lives Matter protests and associated movements nationwide. Chicago, being a major city with a large black population, has held many such protests, several of which I have had the opportunity to attend.

When I went to Chicago on May 30th, my primary goal was to show solidarity with people of color facing oppression. Additionally, I sought to gather some interviews for the Acronym. I expected to get a more diverse perspective from native Chicagoans than I would have found in my hometown. Along with most other suburban residents, my only knowledge of the events was filtered through news reports and TV spin. Five days after George Floyd was murdered by a Minneapolis police officer, some friends and I drove to the West Loop, armed with a tape recorder and some face masks. The protest started on Dearborn Street, where thousands of people marched around the Daley Center with signs. From there, we headed north on Dearborn towards Trump Tower.

“I’ve seen a lot of people just express their frustration. With signs, and expressing that black lives matter, tired of the police brutality, no accountability, and unarmed innocent black men and women being killed by police authorities. Thousands of people are fed up with it. It’s nothing new, but we know now. Social media has its pros and cons but thank god we all can know whats going on in this day and age. And everyone’s sick of the mistreatment of black people.” – Cody, age 20s, from the North Side

At this point, the crowd had swelled, with people filling the intersection of Wabash and Wacker, spilling over Kupcinet Bridge north and south. Lines of police stood solemnly on all sides of the demonstration, armed to the teeth with face shields, batons, kevlar, and the CPD’s signature blue helmets. Trump Tower was quickly surrounded by protesters. 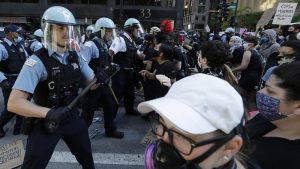 “I think that… knowledge is power. And if we have people continue to come out and educate people, about things – obviously from the turnout today you can see that we won’t keep silent once people know, we can’t unknow things. And so if we keep doing things like this and we keep standing strong as a community and we keep standing together then I think we can really change things.” – Martin, age 20s, from UIC.

For years, Donald Trump represented the problems of contemporary America, especially regarding race, to BLM activists, and the general American left. His inflammatory rhetoric and attacks toward Democrats have long irritated progressives. In front of the skyscraper bearing his name, protesters expressed their frustration at the President, tagging Trump property and removing police barricades. At this point, the police began to respond aggressively. They charged into the crowd, beating protesters and making arrests. In response, the crowd threw firecrackers and water bottles at the police line. Things had taken a sharp turn south. Several police vans and cars drove into the crowd but were quickly surrounded by angry protesters. A van in the center of the intersection was vandalized and rocked back and forth by the crowd, as squad cars drove in from across the city with more riot control equipment. Tear gas, pepper spray, chanting, and sirens filled the air. At this time, the bridges over the Chicago river were pulled up to contain protesters in the Loop and the arrests began en masse. The group I came with left at this point to avoid legal trouble.

I realized with dismay that I had only been able to speak with a few protesters. Most, when approached, either shook their heads and put their hands up, and a few even hid their faces and turned away. To me, this was far more informative than the few words gathered from braver attendants. Everything one needs to know about American activism could be seen in the faces of protesters as they ducked from any cameras and the paranoia that hung over the crowds as police eyed them unnervingly.

After all, some face much more serious consequences than criminal charges for speaking out. After the Ferguson, Missouri protests of 2014, six young men connected to the unrest were found dead under suspicious circumstances. Deandre Johnson was found dead in a burned car, shot through the head. Darren Seales was found two years later, also in a burned car, and shot multiple times. Danye Jones was found hanged, his death ruled a suicide. Most disturbingly, the subject of an iconic photograph from the protests, Edward Crawford, was found dead in 2017, his death also ruled a suicide. It’s no surprise that most people were uncomfortable answering questions about the protest or being photographed. 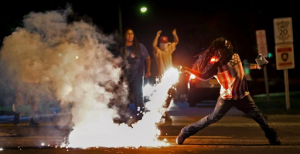 Edward Crawford hurls a tear gas canister back at riot police in Ferguson.

In some of the cities where protests have continued, such as Portland, federal agents have been deployed against the will of local officials, and protesters have been carried off the streets in unmarked government vehicles. 62,000 National Guardsmen have been deployed across the nation. Throughout the summer, people have been seriously injured by “non-lethal” crowd control devices, such as rubber bullets. By early June, 9,300 people had been arrested in connection with the protests. The killers of Breonna Taylor, police who entered her house and shot her in a no-knock raid, were not among them. For many dissenters, it is a dangerous time to speak out—but to them, this makes their message all the more important.