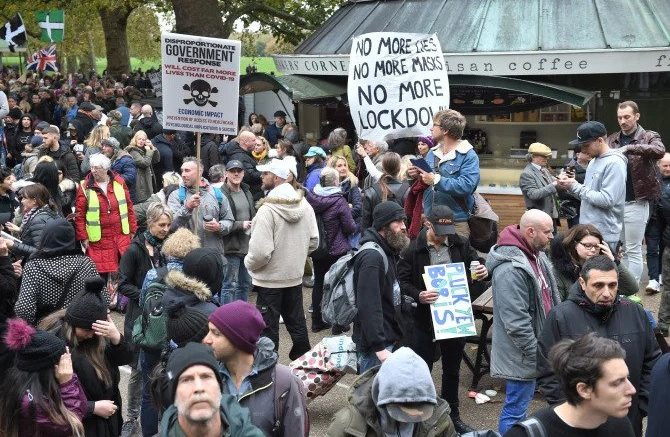 The United Kingdom’s fourth anti-lockdown protest took place on October 24th, where thousands of protesters marched through central London. From the first UK anti-lockdown protest in late April to the current one, demonstrators have marched against the local COVID-19 restrictions, with many of the demonstrators believing conspiracies that the coronavirus is fake. Some protesters held placards and banners on 5G being the cause of people’s respiratory issues, QAnon, and statements that are in disagreement with mask-wearing.

On the previous day, October 23rd, the Metropolitan Police spoke on the subject of protests and other events in London, expressing that “Those who fail to comply, deliberately ignore the instructions of officers, and put other people at risk of transmitting the virus, will be subjected to enforcement action in line with the regulations.”

In regards to the anti-lockdown protests, there has been a great deal of police intervention. On October 16th, the night before London would be placed under tier two lockdown, officers dealt with drinkers that refused to go home and in some cases, had to resort to fines or temporary arrests.

These protests have been occurring as a result of stricter regulations being put into place as a response to the progression of the COVID-19 pandemic. As of midnight on October 16th, London (as well as Elmbridge, Barrow-in-Furness, North East Derbyshire, Erewash, Chesterfield, York, and Essex, but excluding Southend and Thurrock) advanced from tier one to tier two in accord to England’s new COVID-19 three-tier system.

The England alert level system works in three tiers. Tier one being medium, tier two being high, and tier three being very high (with further measures that may be agreed upon locally). In tier one, people must follow the rule of a maximum gathering of six if meeting indoors or outdoors, and pubs and restaurants have to close at 10 PM. At tier two, there is no household mixing indoors, the rule of six applies outdoors, and pubs and restaurants close at 10 PM. At tier three, there is no household mixing indoors or outdoors extending to hospitality venues and private gardens. In this tier, the rule of six also applies to outdoor public spaces like pubs that do not serve meals. Additionally, except for work, education, youth services, or if traveling through the area is a part of a journey, then traveling outside or entering a tier-three area should be avoided.

The Metropolitan Police released a statement announcing that gatherings of more than six were in breach of the restrictions, but there are exemptions, and “Protest is one of those exemptions, subject to certain conditions being met. The conditions include, amongst others, organizers possessing and complying with a risk assessment.”

There has been resistance to tier three measures in Greater Manchester. Boris Johnson (the prime minister of the United Kingdom) warned that he may have to ‘intervene’ if this continues. On October 16th, 2020, Johnson gave a press conference in Downing Street where he spoke on the issue saying that “I cannot stress enough: time is of the essence. Each day that passes before action is taken means more people will go to hospital, more people will end up in intensive care and tragically more people will die.”

At the start of the pandemic, Boris Johnson kept Britain open, meanwhile, other places in Europe began to put in lockdowns. On the 20th of March, 2020, Johnson requested that the pubs, restaurants, gyms, entertainment venues, museums, and galleries be closed. Later, he, with a voice of regret, said that “We’re taking away the ancient, inalienable right of free-born people of the United Kingdom to go to the pub.” Seven days later, on March 27, 2020, it was announced that Johnson had tested positive for COVID-19.

With the increasing number of cases and the rising amounts of anti-lockdown protests, the U.K. is looking towards implementing a circuit-breaker, a tight set of restrictions for a few weeks to lower the COVID-19 cases. Enacting this would hopefully cause less damage to the economy and people’s mental health than a lockdown would because it would decrease the number of locations that would be closed, and it would reduce people’s feelings of isolation.

Be the first to comment on "The U.K.’s Situation with COVID-19 and Anti-Lockdown Protests"