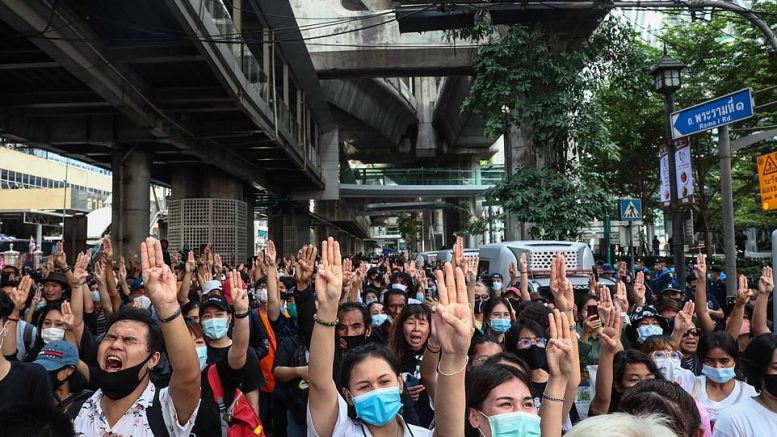 A crowd of protesters hold up the three-finger salute | Source: Reuters

The protests in Thailand that have been ongoing since mid-October mark a significant turning point in the people’s attempt at reformation of the country’s government.

The protests, which had dissipated for the most part for the sake of pandemic safety precautions, resurged starting in mid-July. They began last year after the courts banned a party that was extremely vocal in its opposition to the government of former junta leader Prayuth Chan-ocha. Since then, in September, there have been ten general demands made to reform the monarchy, including requesting that the king is answerable to a new constitution, revoking the laws against defaming the monarchy, and disbanding the king’s royal guards, among others. Most protesters say that they do not hold the goal of dissolving the monarchy, but only to reform it, a notion that the more conservative side of the country strongly dissents.

Protesters are mainly students and other youth, without a clearly defined leader. However, notable activist groups include the Free Youth Movement and the United Front of Thammasat and Demonstration, the former being responsible for the first large protest in July and the latter being a student group from the Thammasat University in Bangkok. These groups are known to have been leading calls for monarchical reform for months or even years in extraordinary cases. Such protests have been rallying points for wider democratic freedoms, such as educational reform and LGBTQ+ and women’s rights.

Currently, protesters are calling for a withdrawal of the increase in the king’s constitutional powers in 2017, which occurred after his succession of the late King Bhumibol Adulyadej. Moreover, the government is being accused of taking steps backward on progress in the constitutional monarchy established when absolute royal rule ended in 1932; that the country’s democracy is being threatened by how closely the monarchy is working with the military. Even with the end of absolute royal rule, the king still wields considerable political power. They are also seeking the repealing of the Lese Majeste laws, in which any person who defames, insults, or threatens the king or queen will be imprisoned for three to fifteen years. Due to the broad encompassing nature of such laws, many rights and activist groups have been charged for sedition and computer crimes, infringing upon their freedom of speech and imposing strict censorship. There has been an announcement from Prayuth of the expiry of these laws, but without confirmation or verification from the Royal Palace.

During the past several months, the three-finger salute from the Hunger Games has become a rallying symbol of the people, representing their demands of reforming the constitution and government. The protests are still going strong, especially with the recent banning of adult sites in Thailand. Back during October, the government tolerated the protests so long as they were “kept within the law.” But as thousands of protesters blocked off Queen Suthida’s motorcade in a gathering at the Government House demanding the removal of Prayuth, emergency measures have since then been taken.

There is now a ban on gatherings of more than five people, as well as restrictions on media or online publication of information that could pose harm to national security. Following these bans, at least three protest leaders have been arrested, with some demonstrations resulting in scuffles between police and activists, despite most of them being peaceful. Even with the announcement of a state of emergency, marchers returned to the streets to continue their protests. As time goes on without the government addressing the protesters’ demands, riots are beginning to break out more frequently, with tensions rising along with them.

The Passing of Prince Philip

Be the first to comment on "Protests in Thailand"