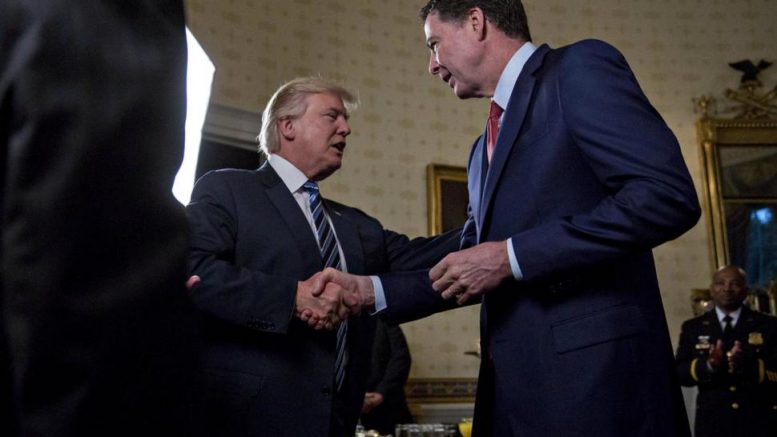 As a news junkie, I get irrationally excited when I open Google News and see multiple headlines for the exact same event, thinking that something big has occurred. At the beginning of this week, it was the French election. Then, President Donald Trump fired F.B.I Director James Comey. In the past, Comey was lauded as a man willing to rise above politics and stick to his principles. However, during the 2016 election, critics claimed that, by announcing his intention to reopen the investigation into Hillary Clinton’s emails, he had forgone those values, with Hillary Clinton going so far as to say, “If the election had been on October 27, I would be your president.”

Nevertheless, last week James Comey testified before Congress about his decision to reopen the investigation, stating, “[I]t makes me mildly nauseous to think that we might have had some impact on the election. But honestly, it wouldn’t change the decision.” This investigation was brought to the forefront this week when it was revealed that James Comey had grossly exaggerated some of the statements he said while under oath. This developing story reached a sharp climax when Donald Trump abruptly fired James Comey.

Now, there are plenty of problems with the manner in which this occurred, not to mention why it occurred in the first place. For example, James Comey found out that he was going to be fired by the news playing in the background of a staff meeting. He initially laughed and believed that it was a joke until his staff brought him into a private room and broke the news. Then, there is the fact that Sean Spicer literally hid in the bushes to avoid talking to reporters. Or, there is another, more worrying fact: James Comey was leading the investigation into Donald Trump’s ties to Russia.

But, this is not an article on my opinions of these matters. Those views are easily searchable online. Instead, let’s focus on people’s reactions to the news, and the inherent problems with them.

Similar to other major events regarding the current administration, after James Comey was fired, my Facebook feed was an immediate barrage of shared Huffington Post opinion articles, rants, and links to petitions asking to impeach Donald Trump. I have no doubt all of these people are well-intentioned. But by simply encouraging like-minded people to speak about already large-scale and popular issues, they may as well have not posted in the first place.

This is called being an ally. These are the people who go to the flashy events, such as a national protest, or rant on Facebook to their friends. But when it comes to attending a local protest which combats those same large-scale issues on a more feasible scale, they are nowhere to be found. Those events get no attention. They are in solidarity by name, but not by actions.

Many people are confused and angry about the events of the past week. However, the world is so much bigger than an iPhone screen or an IMSA echo chamber. And so, instead of being allies, I challenge you all to be accomplices and activists.

Go out into the real world and participate in the local, grassroots events which further your cause. If you are angry about the firing of James Comey, or just want to make your voice heard, educate yourself on what exactly is happening, and how you will be affected by it. Call your local congressman and talk through your concerns, along with the new list of potential FBI directors. When you turn 18, make sure that you are registered to vote, and volunteer to hand out voter registration forms in areas where turnout is low. This may have been the latest national event, but it is certainly not the last. So, get out there and do good. Just make sure that you are actually doing something.