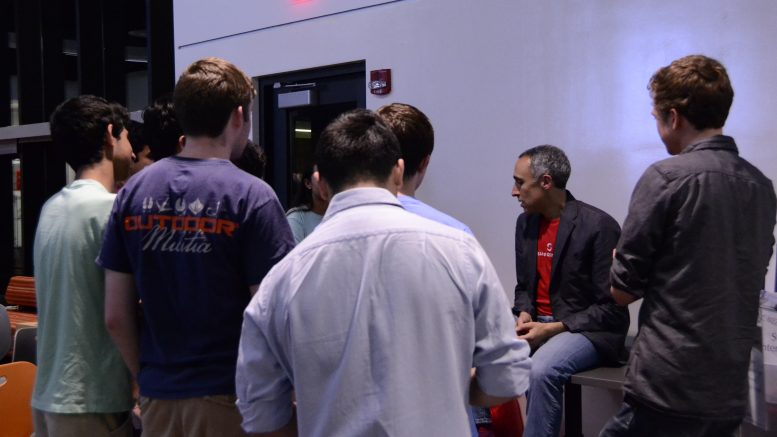 Sam Yagan (second from the left) talking to several students.

“A big burden had been lifted off my shoulders when I realized that I didn’t have to be the smartest to succeed,” alumni Sam Yagan said as he looked around at the audience at TalenTED, TALENTS’s biggest event of the year. For the 40-year-old co-founder of SparkNotes and OkCupid, it was clear that years of experience and failure led him to be the person he is today.

During his talk, he not only emphasized the importance of failure, but also acknowledged he got lucky during his start-up journey. He sold a company six weeks before the “.com” websites crashed.

He also warned being an entrepreneur comes with responsibilities people may not realize, such as being the person many rely on.

He attributed IMSA as the place that fundamentally changed him. Not only did he meet his wife, this year’s Alumni Titan Awardee Jessica Droste Yagan, but he also realized he did not have to be the smartest to succeed.

He created Tech Stars, an accelerator in Chicago that kick-starts businesses, since he wanted talent from Illinois to stay in Illinois instead of leaving to other states. The entrepreneur ended the talk saying that he is on to new things, such as being the CEO of ShopRunner.com and finding ways to compete with Amazon in the retail market.

There was also an opportunity to network, where students interacted with idea baristas, special guests, and several IMSA alumni.

Be the first to comment on "TalenTED Featuring Sam Yagan"