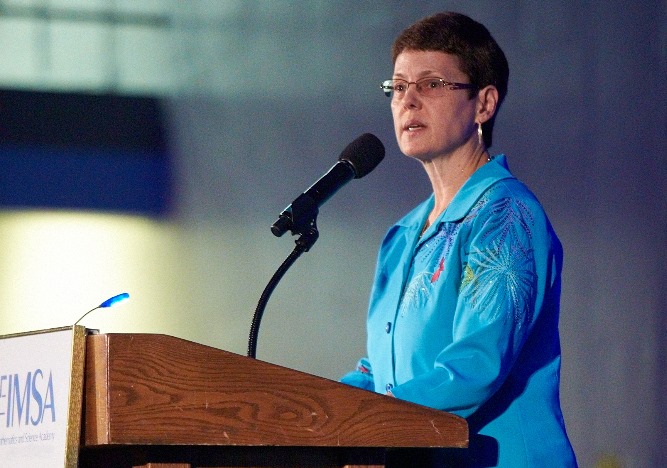 The Acronym welcomes the new face of IMSA, Interim President Catherine C. Veal. With the departure of Dr. Max McGee who served as president for six years, Mrs. Veal will temporarily undertake the responsibilities of president. In her 27 years at IMSA, she has served as Dean of Students, Director of Communications, Chief of Staff, several Vice President roles, and now as President.

Mrs. Veal plans on further developing the growing collaborations such as those between our academic program faculty/staff and our professional field services team, between IMSA’s TALENT program and the digital technology entrepreneurs in building 1871 in Chicago, between students and alumni. Her goal to bring IMSA to the greater community encourages more opportunities for the students. In addition, she looks forward to starting the campus residence hall capital renovation project. She plans on doing her best to make the transition as smooth as possible for the students and faculty. After working closely for over 20 years with IMSA’s founding president Dr. Stephanie Pace Marshall and with Dr. McGee, Mrs. Veal aspires to add her strengths to the things she has learned from both individuals.

Before the founding of IMSA, Mrs. Veal worked as a Residential Counselor and Head RC at the North Carolina School of Science and Mathematics (NCSSM); and she admits that if it were not for IMSA, she would probably still be living in North Carolina. When asked what she loved about IMSA, she replied, “My favorite part is being surrounded by and working with so many good, smart people every day to advance our legislative charges, mission and goals. Decades later, IMSA people, friends of IMSA, and our compelling work still inspire me, keep me up late at night and get me up early in the morning.”

President Veal’s statement may be found on the IMSA site.

What is entrepreneurship anyway?