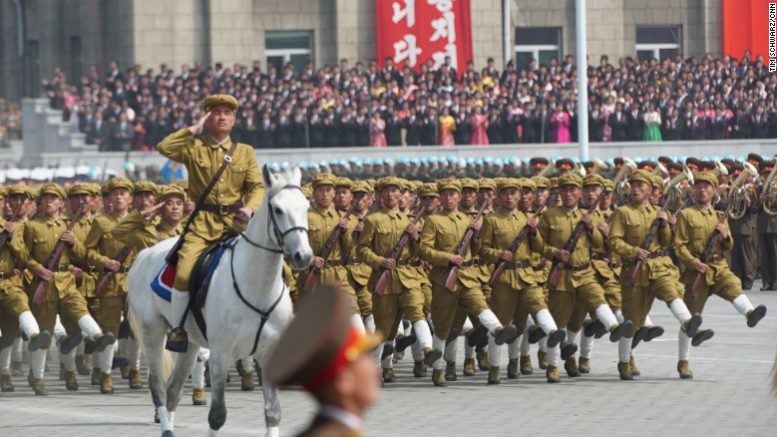 After North Korean missile tests over the past month that showed increased sophistication in the country’s nuclear arsenal, the U.S. has promised to reaffirm its grip on the peninsula’s military activity.

In response, South Korea has also authorized the U.S. to begin to build its Terminal High Altitude Area Defence (THAAD) system in the country to prevent possible missile attacks from North Korea.

Robert Litwak of the Woodrow Wilson International Center for Scholars told The New York Times “the Cuban Missile Crisis in slow motion” is currently playing out, as the U.S. seems to be taking more aggressive moves as well. President Trump and his allies have clearly stated that America will no longer tolerate North Korea’s advancements in nuclear technology.

“We will not rest and will not relent until we obtain the objective of a denuclearized Korean Peninsula,” said Vice President Mike Pence during a visit to Japan earlier in last week. He warned Pyongyang that “the era of strategic patience is over,” citing the recent U.S. airstrike on Syria as a deterrent to any attempts at testing Trump’s resolve.

In response, the foreign ambassador to North Korea from Syria Tammam Sulaiman claimed the attack on the Syrian airfield to send a “message” was irresponsible of the United States.

“We’ll be conducting more missile tests on a weekly, monthly and yearly basis,” said Han Song-Ryol, North Korea’s Vice Foreign Minister, confirming the testing was far from over. Other North Korean officials have reiterated similar statements, warning that the situation is escalating.

North Korea’s neighbor, China, has held a more neutral stance on the issue, with Foreign Minister Wang Yi mentioning he believes the U.S. would prefer a more diplomatic resolution.

“North Korea is looking for trouble,” Trump tweeted last week. “If China decides to help, that would be great. If not, we will solve the problem without them! U.S.A.”

Currently, Trump has several options that could benefit both sides of the conflict. Whether putting economic sanctions on the North Korea initiating diplomacy with the country, or using military force, the administration will have to tread carefully.