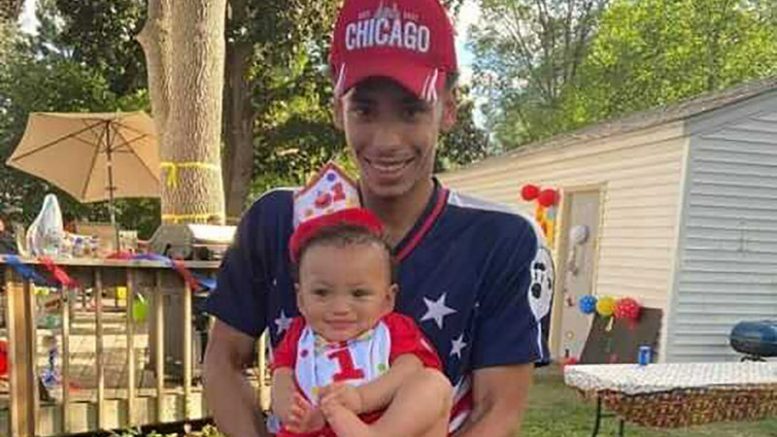 On April 11th, Daunte Wright, a 20-year-old Black man, was shot and killed by Brooklyn Center police officer Kimberly Potter. The shooting—which took place about 10 miles from where Derek Chauvin, one of four police officers involved in the killing of George Floyd, was on trial—occurred after police stopped Wright, who was on his way to his older brother’s house. Officers cited expired registration tags as their reason for pulling Wright over. Having discovered that he had an outstanding arrest warrant, officers then attempted to detain Wright. Wright stepped back into his car, which, according to Brooklyn Center Police Department Chief Tim Gannon, prompted a struggle with officers.

Body camera footage shows Potter aiming a handgun at Wright and yelling, “taser!” Potter is then recorded shouting “Holy sh*t! I just shot him!” as Wright pulls away in his car.

After driving multiple blocks, the car hit another car. Police and medical workers arrived on the scene and pronounced Wright dead.

When he was first pulled over, Wright called his mother, Katie Wright. “He said they pulled him over because he had air fresheners hanging from his rearview mirror,” Ms. Wright recounted. She said that Wright put the phone down, at which point she heard “scuffling” and an officer’s warning telling Wright not to run.

Upon calling back, Wright’s girlfriend told Ms. Wright that her son had been shot.

“It is my belief that the officer had the intention to deploy their Taser but instead shot Mr. Wright with a bullet,” said Brooklyn Center Police Chief Tim Gannon.

Currently, Kim Potter faces a charge of second-degree manslaughter. Prosecutors aim to show that she is “culpably negligent” and took an “unreasonable risk” in shooting Daunte Wright. The maximum penalty Potter would face under this charge is 10 years in prison and a fine of $20,000. Potter is currently out of jail on a $100,000 bond, under the order not to use firearms or explosives throughout the remainder of her case. Potter’s next court date is May 17th.

Both Chief Gannon and Potter have resigned from their positions at the Brooklyn Center Police Department.

Prior to Potter’s initial court hearing, Wright’s family and their lawyers gathered at the Minneapolis church where Mr. Wright’s funeral was held Thursday. There, they remembered the man they lost and pressed for “an aggressive prosecution of Potter.”

“The last few days, everybody has asked me, what do we want to see happen?” said Ms. Wright. “I do want accountability, 100% accountability… But even when that happens, we’re still going to bury our son.”

Ms. Wright, her family, and many protesters have rejected Chief Gannon’s claim that the shooting of Wright was an accident. “Justice, what is justice?” said Wright’s aunt, Naisha Wright. “Do we get to see Daunte smile? We don’t get to see that.”

Since the shooting of Daunte Wright, hundreds of demonstrators have protested on the streets of Brooklyn Center. Ms. Wright has asked that they remain peaceful. “We want justice for Daunte,” she said. “We don’t want it to be about all this violence.”

The night of Wright’s death, Brooklyn Center demonstrators threw cans and bricks, to which the police responded with tear gas. Many demonstrators were arrested. Protests have continued since, becoming calmer Monday and Tuesday, though curfews have been imposed in the Minneapolis region. Friday, a peaceful march began in Brooklyn Center, growing to nearly 500 people by evening. Some protesters pushed against a fence surrounding the police station while throwing bottles at officers.

“We did not respond at that time,” John Harrington, the commissioner of the Minnesota Department of Public Safety, told reporters. “We continued to allow them to have their protest in front of the fence line for about an hour.”

This comes as demonstrators around the country also protest the killing of Adam Toledo, a 13-year-old boy from Chicago, following the release of the body camera footage of his shooting.

In Chicago, protests have seen signs with messages such as, “Stop killing kids.” A march was held in Oakland, California, for Wright and Toledo. A group of protesters eventually turned violent, but Oakland has said it will continue to call for peaceful protests. Portland has also seen protests, with one protester, a white man in his 30s, being shot and killed.

Beyond the immediate connection in terms of location between Daunte Wright and George Floyd is another connection between the two victims: Floyd’s girlfriend, Courtney Ross, worked with Wright while he was a high school student. Ross was a teacher’s assistant and counselor at Wright’s school.

“[I’m] crushed,” Ross said during a protest Tuesday. “It’s enough that Floyd is gone, but for one of my youths to be gone as well. He was just a wonderful, beautiful boy.”

Wright had a son, Daunte Jr., who is almost two years old. As a high school freshman, Wright was voted class clown. “He had sisters and brothers that he loved so much,” said Katie Wright.

Jonathan Mason, who was a youth development specialist and mentor at one of the high schools Wright attended, said, “He was a charismatic kid. He would joke with you, and he was so witty. He was one of those kids that everybody looked up to.” Mason recalled that during mentoring sessions, Wright would talk about his future aspirations: “He said, ‘I want to be an NBA player, I want to be a fashion designer, I want to be a business owner.’ I said, ‘If you grow up, you can be whatever you want to be.’”