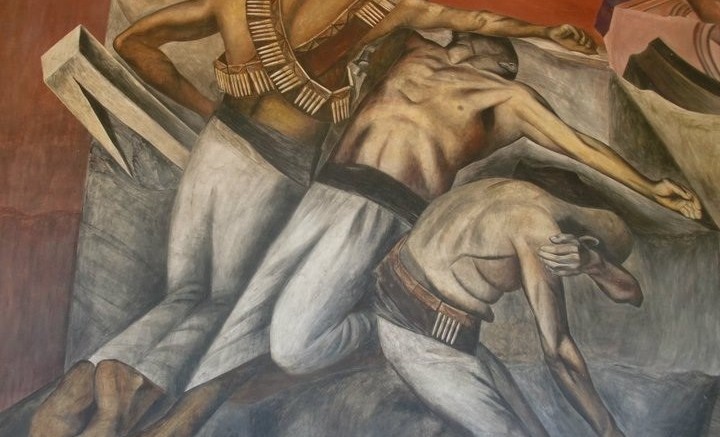 On September 26th, 2014, students from the Ayotzinapa rural teacher’s college in Mexico were attempting to raise money to attend a protest against narco-politics and the inaction of the Mexican government by creating a roadblock to solicit donations, a longstanding tradition in their state of Guerrero. At 9 p.m., uniformed police ambushed their convoy in the city of Iguala. At midnight, the uniformed men abducted forty-three students then mutilated and killed a forty-forth. On November 7th, after a month of international outcry and mass protest, the office of the attorney general of Mexico announced the “discovery” of several garbage bags haphazardly filled with the remains of the missing forty-three. Mexico has been left to the machinations of the cruel and vicious, a fact that this massacre, seemingly orchestrated by the state in conjunction with local drug cartels, only further illustrates.

The wheel of power budged as the mayor of Iguala fled, the governor of Guerrero resigned, President Enrique Peña-Nieto was subjected to long-overdue scrutiny, and the people of Mexico finally started asking questions. However, the promised revolution never materialized. One year after one of the largest organized protests Mexico had ever seen, Guerrero is still embroiled in strife and Peña-Nieto still rules Mexico which just as much pomp and circumstance as before. This return to the status quo demonstrates a system built around blood and greed.

The Ayotzinapa School has a proud history of breeding local martyrs. There, the ideology of students crystallizes around Marx, Engels, and Lenin. Numerous senseless acts of violence have been perpetrated by both sides during the War on Drugs; the abduction of the Ayotzinapa students is not such an example. Guerrero flows in an eddy of armament, revolt, and the status quo. For those in control, chaos is a mandate. The state of Guerrero lacks the effective means to engage their population. Every so often, the people of Guerrero rise up simply to ask for change, but these sporadic uprisings never achieve the kind of unity in thought and action necessary to bring about lasting improvements.

Constant violence and chaos, therefore, are measures of control. They prevent the organization necessary to achieve a real revolution. The narcotics trade which fuels such violence is a symptom of a failed state: where economic policy continues to marginalize the poor, trade is dictated by the whims of the United States, and the people of Mexico lack a real voice of their own. These massacres are not senseless; they are part of a systemic cycle of revolution and retribution that Guerrero, and Mexico in a larger sense, seems so hopelessly locked in.

The night of the Ayotzinapa massacre should have been a line in the sand, a distinctive before and after change in both the ideological character of the Mexican state and the involvement of the Mexican people. However, the country appears more divided than ever, and the people seem unwilling to mount a response. These acts of drug-related terrorism, the persistence of violence and unrest, are symptoms of a deeper underlying issue: a large portion of Mexican society is deprived and marginalized. Only by addressing these problems, by empowering its people, can Mexico hope to change.
The accompanying image is The Trenches by José Clemente Orozco from 1926.

Be the first to comment on "Un Nuevo Revanchismo: Conflict in Mexico"