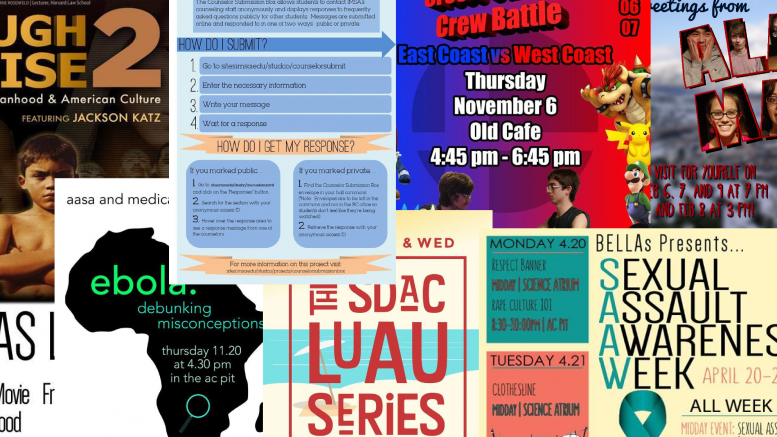 For the duration of this year, clubs have been on indefinite hold for printing and hanging large posters. This change is now likely to be permanent. This is a shift from the past culture of IMSA; in the past student posters hung around the building. Most major events put on by students had some advertising campaign involving social media and physical representation in the form of a poster campaign.

These posters were often treated both as exercises in public information and public art. Students tasked with designing posters often grew a great pride in their poster designing skills. In this high-performance STEM environment, posters often represented a brief foray into the humanities needed to create a visual act of persuasion.

Upperclassmen will remember this time when walls were peppered with these posters. Before this year, club events were allowed to hang – in approved areas – either one or two posters up to two feet by three feet. In addition, student events could have some smaller posters printed at eight and a half by eleven inches. The rules have now been changed to prevent students from printing the two foot by three foot posters. Students are still allowed to conduct marketing campaigns on social media and with smaller posters and flyers printed on approved printers or off-campus.

These changes were made for a few very important reasons. According to Amy Woods, Coordinator of Campus Activities, poster printing for club events had taken up significant resources – both time and money. Because of this, reducing unnecessary use of the poster printers in the IMSA Technology and Media Center (ITMC) has been on Student Life’s agenda for some time. Due to complicated factors involving IMSA budget concerns, Woods and other members of Student Life and ITMC chose this year to implement the changes they planned.

Student Life plans on encouraging new modes of advertising for clubs. As part of continual improvements, Student Life plans to place monitors – TVs and projectors – around campus. Specific locations include the Old Caf, near the CAC office, Sodexo, and more. These monitors will display announcements, student posters, and other information relevant to the community. Currently, they have begun use of the Old Caf projector for this purpose.

Student Council has been involved in the process of this transition. For Sophomore-at-Large election campaigns, they tested out monitors to display digital copies of the posters printed for the candidates. These posters represented an exception to the poster printing rule, one of the last, according to Woods. Student Council has used monitors for campaigns before, but this round of elections had the specific goal of testing a new method of distribution between the monitors.

Be the first to comment on "Clubs Not Able to Print Large Posters; Other Advertising Encouraged"