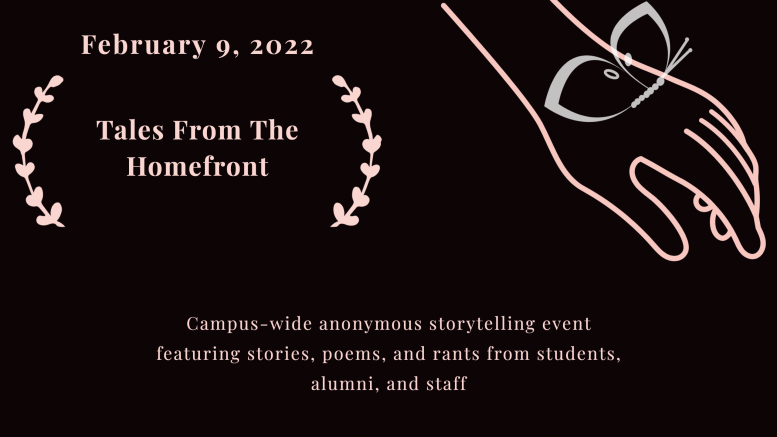 On February 9th, 2022, GEA (Gender Equity Association) presented Tales From The Homefront, more commonly known as ”Tales,” to the IMSA community. It is a show that features anonymous submitted stories and rants regarding difficult and serious topics not often discussed. The stories and rants featured in Tales have been directly experienced and submitted by current students, alumni, teachers, and staff members. Co-president Liz Soyemi (‘22) described Tales as “being raw and honest.”

There were many scheduling conflicts that the GEA board had to face. One week prior to the show date, weather conditions worsened, and all IMSA activity occurring on February 2nd was postponed. No one was allowed to enter the main building because of the intense snowstorm. This setback popular events such as Lunar Tech Rehearsal and the Mini Elective Fair. Because the mini elective fair had been canceled, it was rescheduled for next week, during the exact time as Tales at  1 – 3 PM. With both events coinciding, GEA had to arrange Tales to take place earlier that day at 9:30 – 11:30 AM. Co-project director Erin Yoo (‘22) explained that “it wasn’t anyone’s fault,” and she’s “thankful for Dr. Devol, [their] advisors, and maintenance because they worked with us to keep Tales on the same day.” Although the time was earlier than GEA had wanted, she believes that there were benefits to having it in the morning: “if the elective fair was first, more underclassmen might not have attended because they’d be kind of burnt out from the fair and thinking about classes.”

In addition to the time changes, GEA had to also accommodate COVID restrictions. Therefore, Tales was planned to take place in the Main Gym, different from the normal auditorium set up. Co-president Natalie Hulseberg (‘22) acknowledged that “the only major difference besides the location was the absence of the usual canvas.” In the auditorium, the stage allowed for a decorated canvas to be hung up for speakers when they performed their stories. In the gym, there was a white backdrop for the speakers to go behind as they performed. Because the backdrop wasn’t the same dimensions as the typical canvas, there were 2 projectors on both sides of the backdrop to replicate the canvas size. Soyemi also noted that “the atmosphere [of the gym] was a bit more open” whereas, the “auditorium was more solemn and [included] a privacy component to it.”

Furthermore, GEA wanted to implement new additions to Tales such as the replacement of clapping with holding up flashlights from phones. Yoo explained that she “saw a lot of audience members turn on their flashlights when a story resonated with them,” and she was “glad [they] added that interactive aspect.” Soyemi acknowledged how “some of the stories [the audience] could connect with or know someone who could connect with.”

Although there were many logistical setbacks, GEA is proud of how Tales turned out. Yoo mentioned that she received “a lot of positive feedback from underclassmen who went to the show.” Additionally, co-project director Shehzad Bajowala (‘22) stated that “not only was there great turnout, but the stories and rants were executed close to perfection.” Tales was an outlet for the IMSA community to express their voices for serious topics. Hulseberg expressed how Tales educated everyone, and it’s an “emotional experience, but an important one nonetheless.”

Be the first to comment on "Tales From The Homefront 2022"