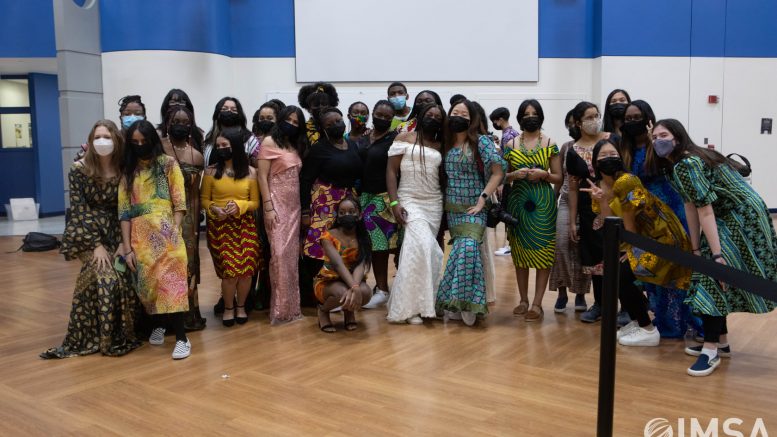 With months of preparation, long practices, and endearing dedication, the Black Student Union showed the annual Harambee show on Friday, February 25th. Under normal circumstances, a spectacular culture show would be praised but, however, this was not the case. With Lunar, Harambee, and Clash all scheduled within two weeks of each other, the clock was ticking and it was ticking fast. Even so, with the universe seemingly yearning for a failed culture show the BSU was able to prevail. They unveiled a dazzling and spectacular culture show that has IMSA students grooving to the rhythmic beats in Step and the angelic Mod21 performance. While from the bleachers, it seemed that planning went smoothly, and for the most part it did, however, there were several misadventures in the production in the show.

With each culture show, a script pertaining to a certain aspect of the show’s culture usually accompanies the main performance. Harambee was similar in this case. Having had planned the script in late November, there was enough time and motivation to deliver a decent film – and they did. The premise of the film follows a Romeo and Juliet-esque plot in which a Black American and African American couple are forbidden by their parents from seeing each other due to cultural conventions. Behind the green transitions and superb color grading, what the camera can’t edit away is the tortuous week of filming. The directors had initially planned to film the Monday, Tuesday, and Wednesday, of Lunar giving ample time to edit and film, however, those plans were quickly thwarted by inaccessibility to equipment for the first two days and the snowstorm that closed the main building on Wednesday. This pushed back filming by a whole week giving even less time and adding more stress onto the actors – unfortunately, this isn’t even where the real troubles began.

On the first day of filming my true love gave to me, three missing people, two broken cameras, 1 full SIM card – but seriously, the first day of filming was rough. It was a struggle to just gather all of the participants and when they did show up, not only were lines not memorized but the laughter bug would attack mercilessly. And when our filming time expired at 7:30 pm, we had to extend the timing because the SIM card got full.

On the second day of filming my true love gave to me, two location issues, one picture retake, and a waste of precious time.

On the fourth day of filming my true love game to me, nothing. Nothing happened, because we had to cancel due to schedule conflicts.

The last day of filming went surprisingly well. The wedding scene was painted with colors of laughter, community, and the gaze of a stern police officer as the clock struck 7:00 pm in the AcPit.

A frame of the wedding scene. Source: ISP

With everything going to plan, the only place to go was down – and it did.  A hair-tearing dispute between castmates extended filming by half an hour, leaving everyone, including ISP, stressed and glad that filming was finally over. 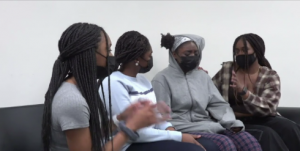 A frame of Lola and friends comforting Bisi. Source: ISP

Harambee Tech Week was half-baked, literally. Having Harambee the week right after extended caused a few complications. For starters, with only two weeks to learn a dance a lot of the workshop had to be done over the break and we all know how poorly virtual meet-ups are. And with Monday being a day back from extended, that was one less day of practice, and due to complications with administration, both the west and main gym were closed. These changes prompted a strict practice schedule including early morning and late-night sessions that took time in people’s schedules that did not exist. With only two days to practice and a conflict with clash drill, time was of the essence and the show was an ever approach.

Wednesday, the week of Harambee, tech rehearsal was from 4:30-10:00 pm. In the first round of practice, the simplest way to characterize the performances is a term we’re all too familiar with: a hot mess. With a limited amount of time to actually perfect the dances they worked on, and not enough venues to practice as a group, dances were way out of sync, the MCs forgot their lines, and it was looking like Harambee was about to flop. That was until our second run-through. Almost magically, the dances were polished, the MCs were hitting the right cues. Everyone looked good. It seemed that the nonexistent time available motivated all participants to put in 150% effort into their craft.

Thursday was filming day. Filming day went well: a few suggestions here and there, and a few re-filmings to boot, but there weren’t any major problems except for the shortage of Harambee shirts.

Although hearing all the fails and mess up that happen leading up to the show creates an attractive article, the turnout of this year’s show was especially successful. Kevin Broy, the ISP advisor said this was the most people involved in Harambee ever. With the pandemic taking one and a half precious years of their IMSA experience, Juniors and Seniors unable to experience another culture show or not having participated in one yet were big contributors to the entirety of Harambee and truly made the experience worthwhile.

Be the first to comment on "Behind the Scences of Harambee"