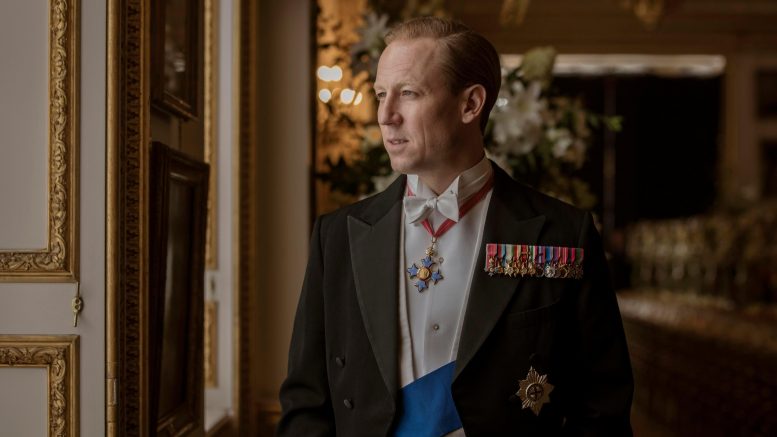 Prince Philip in The Crown | Source: The Irish Sun

There have been numerous portrayals in film of Prince Philip, the Duke of Edinburgh, who passed away on April 9, 2021, at the age of 99. To learn about Prince Philip’s young life and his time leading up to his wife’s coronation, you can read the first half of this article here.

Season 1, Episode 3 of the Netflix original series The Crown portrays Elizabeth’s life after her father’s death and the time leading up to her coronation. Throughout the episode, Prince Philip struggled with the various changes to his wife’s life, and subsequently his own life. Elizabeth’s coronation inhibited the prince’s career and gave him more responsibility with their kids, according to the show. The prince also struggled with the Queen’s new precedence – Philip had to walk behind her and give up any constitutional position. Additionally, the prince was adamant in having the name of the Royal House, and the surname of his children, be his: Mountbatten. Elizabeth agreed, saying, “I am queen, but I am also a woman. And a wife. To a man whose pride and whose strength were, in part, what attracted me to him.” Lord Mountbatten, Philip’s uncle, also pressed for this naming of the royal house, and he was excited by the idea of the first Mountbatten king, Charles. The lord even announced this news of the Royal House at a dinner party before it was official. One of the guests was Prince Ernst August of Hanover, nephew of Mary of Teck, Elizabeth’s grandmother. Prince Ernst reported Lord Mountbatten’s news to his aunt, who was against the idea and advocated for the House of Windsor to continue. In the end, Cabinet did not approve changing the name of the Royal House, so it remained as the House of Windsor. Prince Philip was quite disappointed with this result, as well as other events. The prince spent a great deal of time and effort renovating Clarence House, which was to be the family’s home. However, when Elizabeth had to take the throne, Cabinet forced the family to move to Buckingham Palace. The end of this episode features Elizabeth and Philip on bad terms – Philip said, “What kind of a marriage is this?… You’ve taken my career from me, you’ve taken my home. You’ve taken my name. I thought we were in this together.” However, the couple moves past these difficulties with time, as demonstrated throughout subsequent episodes.

While his wife performed her duties, the prince also took on royal responsibilities of his own. In 1956, Prince Philip embarked on a Commonwealth tour by himself, as portrayed in the documentary Prince Philip’s Tour. The tour included the inspection of British survey bases, a factory whaling ship, and more. His trip included visiting Antarctica, Gambia, Malaya, New Guinea, and Australia. Then, in 1957-1958, the prince presented on the television special The Restless Sphere: The Story of the International Geophysical Year. The prince outlined his goal of forming an international group of scientists to collaborate on performing scientific experiments about the Earth. With concerns of rising oceans and melting glaciers, Prince Philip proposed work with satellite technology, solar observation, and oceanography. The prince also served as the first president of the World Wide Fund for Nature from 1961 to 1982. He continued similar work throughout his life.

Prince Andrew, Prince Philip and Queen Elizabeth’s son, was born in 1960, and Prince Edward was born in 1964. Elizabeth and Philip’s fully grown children, Charles and Anne, were first introduced on The Crown in Season 3. The father-son dynamic between Prince Charles and Prince Philip is highlighted through several films depicting Charles’ relationship with Princess Diana, including Charles & Diana: A Royal Love Story, The Royal Romance, and Diana: Her True Story. Through these movies, the relationship between Philip and Charles appeared strained, as Prince Philip attempted to micromanage Charles’ love life, as well as criticized Charles for not being able to handle his marriage well. Later, the film Whatever Love Means depicted Philip’s critiques of Charles’ love life, specifically Charles’ indecision between Diana and Camilla. Next, the film The Queen displayed the death of Princess Diana. Through this film, the relationship between Philip and Diana was revealed – apparently, Prince Philip supported Diana through the marriage, writing her several letters of encouragement. This period of time is also further depicted in Season 4, the most recent season, of The Crown.

The Crown seems to be on track to continue the royal story, and there is much more ground to be covered. With the ongoing series The Crown, as well as other potential films in the future, Prince Philip’s legacy will likely live on for generations to come.

Be the first to comment on "The Life of Prince Philip Through Film: Part 2"