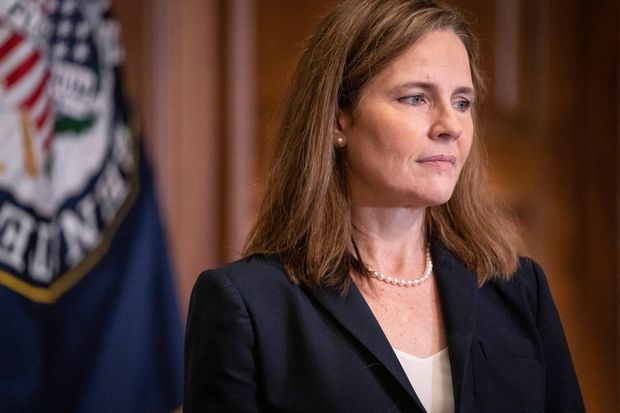 Judge Amy Coney Barrett was contacted by President Trump the day after Justice Ruth Bader Ginsburg died. Just two days later, Trump offered Judge Barrett the position officially, which she quickly accepted. Regardless of the fact that, four years ago, President Obama was blocked from nominating a new Supreme Court Justice when Justice Antonin Scalia passed away, Senator Mitch McConnell, head of the Senate, announced that President Trump was indeed allowed to nominate Judge Barrett for hearings. One can look at Judge Barrett’s judicial opinions and public statements and easily see that she’s going to tip the past 5-4 Supreme Court to a 6-3 Supreme Court, with a majority for the conservatives.

However, it seems that our already conservative-tipped court is going to be tipped even further with conservative views and beliefs. It is clear that Judge Barrett is likely to overturn laws and issue new ones that will cause unjust behavior and needless harm to many minorities. She will add to the injustice of our country through rulings that hurt immigrants, women, the LGBT+ community, and many more people.

To start, let’s look at what she has previously done on cases in which she undermines basic constitutional rights. The case of Yafai v. Pompeo dealt with Moshin Yafai’s wife Zahoor Ahmed, a citizen of Yemen, and their children. Ahmed and the children were denied their visas on the account that Ahmed had “attempted to smuggle two children into the United States,” regardless of the fact that there was no evidence that this had occurred. Yafai and Ahmed had provided accurate documentation on their children’s behalf, and the case quickly went to the courts. When it came to the courts, Judge Barrett wrote for two of the judges on the three-judge panel, saying that it was perfectly acceptable for the accusation to have no evidence backing it up. This previous case shows clearly how Judge Barrett will deal with immigration cases that make their way up to the Supreme Court. She will take a harshly conservative view, choosing to over-empower the government and disempower immigrants, regardless of if the immigrants involved in the case are following the law or not.

Judge Barrett ruled on another case in which Anna Chronis, who went in for a pap smear and experienced pain and bruising afterward, and could not get the University of Illinois Mile Square Health Center, where she got the pap smear, to return her calls or schedule a follow-up appointment. She filed a complaint requesting $332 for the issues she experienced. She was declined the money. She wrote the Centers for Medicare and Medicaid Services requesting assistance in getting the $332. Ultimately, she sued under the Federal Tort Claims Act.

Judge Barrett, who was writing for the Seventh Circuit panel, said that Chronis’ case should be dismissed on the account of Chronis not following the correct procedure. Judge Barrett backed her claim up with the statement that Chronis didn’t explicitly say she wanted $332, which then invalidated her request, and that there were many other specific, tiny details were missed in Chronis’ request for both the money from the University of Illinois Mile Square Center and the assistance from the Centers for Medicare and Medicaid Services. This case gives a great example of how Judge Barrett will treat cases in which women have been wrongly treated, specifically with medical issues. It also shows how Judge Barrett will treat cases in which disenfranchised people have a difficult time accessing the proper legal knowledge to correctly present their cases.  Judge Barrett seems to have little to no regard for the way she handles cases with minorities. She tends to not take into consideration any of the factual evidence, simply using her previous standpoints and beliefs to make her decisions for her.

Besides her blatant disregard for basic constitutional rights for minorities, Judge Barrett has also made it crystal clear that her Catholic beliefs are central to her intellectual identity. Her supporters have repeatedly stated that Judge Barrett would never allow her religion to make its way into her decisions for cases, although she believes that if there are any cases in which a judge thinks the penalty, specifically the death penalty, is immoral, then said judge should be able to pull themselves from the case. Regardless of her statement of being able to pull one’s self from a case regarding the death penalty on the basis of immorality, Judge Barrett clearly does not think the death penalty is immoral since she has previously voted to allow executions to continue.

On top of Judge Barrett’s thoughts on the death penalty, she stated in 2013 that she believes life begins at conception, and in 2006 she signed a statement that was published as a newspaper ad that announced, “It’s time to put an end to the barbaric legacy of Roe v. Wade and restore laws that protect the lives of unborn children.” These two statements, along with her strong religious beliefs tied to a church that believes that abortion is “always immoral,” show us how Judge Barrett would treat abortion cases that make their way to the court. It is also a tell-tale sign that fears of Roe v. Wade being overturned could quickly become reality.

Judge Barrett has also made it glaringly obvious that she thinks there is nothing wrong with our current gun situation. In 2019, Judge Barrett said she would prefer to limit the sweep of a federal law that forbids people with felony convictions from owning guns, drawing on originalism, a legal theory that seeks to interpret the Constitution as it was originally intended and understood.

Justice Ginsburg, however, always called back on the history behind the Second Amendment. She made note that the individual states, when the Constitution was created, made laws telling the public which weapons they needed to keep in their houses, so, if and when men were called to serve as militiamen, they would be ready. “The Second Amendment is outdated in the sense that its function has become obsolete,” she said. This is another clear difference between Judge Barrett’s ideas and Justice Ginsburg’s ideas.

The court, however, turned down 10 appeals in Second Amendment cases in June, on the basis of needing four votes to grant review. It’s easy to see that the conservative wing of the court probably thought they wouldn’t be able to secure Chief Justice Roberts’s vote. If Judge Barrett is to be confirmed, though, the court is likely to hear more second amendment cases, since they have the votes.

Another fiercely controversial yet highly important topic when it comes to Judge Barrett is LGBT+ rights, specifically marriage equality. During Judge Barrett’s Senate confirmation hearing, she expressed that she thought Brown v. Board of Education, which desegregated public schools, and Loving v. Virginia, which allowed interracial marriages, were correct with their final rulings. She, however, would not say whether or not she agreed with the ruling in Obergefell v. Hodges, the case that ruled in favor of gay marriage. “It is shocking and deeply concerning that she refused to affirm the constitutionality of thousands and thousands of marriages across the country,” Democratic Senator Patty Murray of Washington said. Her refusal to give her opinion on the final ruling of the case suggested that, if confirmed to the Supreme Court, thousands of LGBT+ lives could be flipped upside down.

Alongside her refusal to talk about her opinions on the case, she also served for almost three years on the board of a private Christian schools that didn’t allow children of same-sex parents to come to their schools and didn’t allow openly gay teachers to teach. These policies were in place for years before Judge Barrett joined the board in 2015 and were publicly known.  The three schools that are under this board, in Indiana, Minnesota, and Virginia, affiliate with People of Praise, a community that roots itself in its own interpretation of the Bible. Judge Barrett and her husband have been longtime members of this community, and multiple of their children have gone to the school under the board in Indiana.  Judge Barrett also tends to use her religion to make her way towards her rulings, regardless of the need to separate state and church.  “Your legal career is but a means to an end, and that end is building the kingdom of God,” said Judge Barrett.

Judge Barrett holds vastly different ideas and beliefs than Justice Ginsburg, and she makes it known every time she rules on a case. She has the potential to drastically affect important country-wide issues and make an impact that can last for decades to come.

Be the first to comment on "How will Judge Amy Coney Barrett Ultimately Rule as a Supreme Court Justice?"