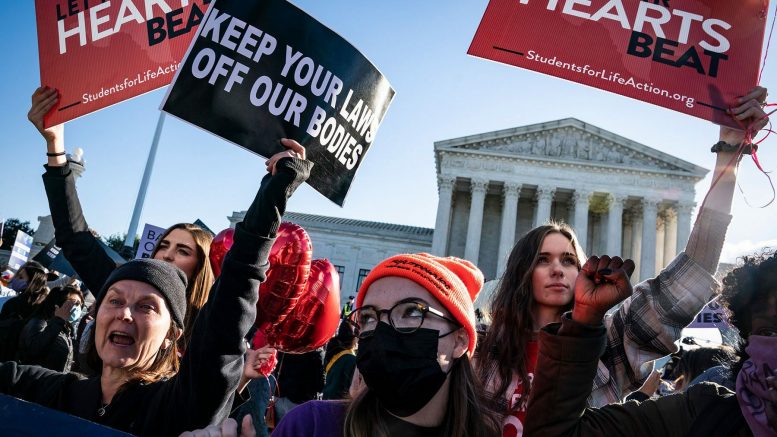 Pro-life and pro-choice activists gather at a rally outside the Supreme Court in protest. | Credit: 19th/Jabin Botsford

Life “after Roe v. Wade” may no longer be such a distant concept, if the trends in the rulings of the majority-conservative Supreme Court are a useful indicator.

On Dec. 1, 2021, the Supreme Court heard arguments on a Mississippi law that is a direct challenge to Roe v. Wade, the 1973 landmark decision that protects a pregnant woman’s liberty to choose to have an abortion without excessive government restriction.

Not only would the Mississippi case undermine Roe, but it would also undermine the 1992 ruling in Planned Parenthood v. Casey that reaffirmed Roe.

Both of these cases allow each state to regulate — but not ban — abortion up until the point of fetal viability, which is roughly 24 weeks.

Mark Sherman, the reporter responsible for covering the Supreme Court, Washington, D.C., reported: “On December 1, the court heard the case…. Often when the justices come to the bench, some of them share a private joke, there are some smiles. But not that day. They came to the bench and it was all business — I would almost say a little somber.”

Justices Gorsuch, Kavanaugh, and Barrett were ready to side with Mississippi. However, this it wouldn’t be a direct reverse of Roe yet.

Justices Thomas, Alito, and Gorsuch were all willing to reverse Roe. The other three conservative justices were reluctant, though.

Chief Justice Roberts focused on abortion only, not the reversal of Roe. He also paid heavy attention to the viability line.

“Why would 15 weeks be an inappropriate line?” Roberts asked Julie Rikelman, who was representing the clinic bringing forth the case. “Viability, it seems to me, doesn’t have anything to do with choice, but if it really is an issue about choice, why is 15 weeks not enough time?”

“If the court were to move the line substantially backwards —and 15 weeks is nine weeks before viability, your honor — it may need to reconsider the rules around regulations because if it’s cutting the time period to obtain an abortion roughly in half, then those barriers are going to be much more important,” Rikelman responded.

Justice Barrett — the mother of seven children, two of whom are adopted — brought up many questions about adoption and seemed to distinguish between bearing a child and parenting.

Justice Kavanaugh — the replacement of Justice Anthony Kennedy, a centrist on abortion issues — signaled that he would be willing to reverse Roe.

“Why should this court be the arbiter rather than Congress, state legislatures, state supreme courts and the people being able to resolve this?”

Solicitor General Elizabeth Prelogar, representing the Biden administration, said that it “is an incredibly difficult choice.” It is a choice that the court “for 50 years has recognized must be left up to [women] based on their beliefs and their conscience and their determination about what is best for the course of their lives.”

Yet, now, with the introduction of one case and the supermajority of the Supreme Court, there is a high chance Roe may be overturned by June of 2022, which is when the decision for the Mississippi case is expected.

Currently, there is a law in Texas that bans most abortions and was designed specifically to evade court challenges. The law prohibits abortions once cardiac activity is seen in an embryo, which is usually around six weeks and well before most women even know they are pregnant. This law makes no exceptions for rape or incest.

Based on current laws and constitutional amendments, “21 states are certain to attempt a ban on abortion” if Roe were to be overturned, according to an analysis from the Guttmacher Institute, a research group that supports abortion rights. 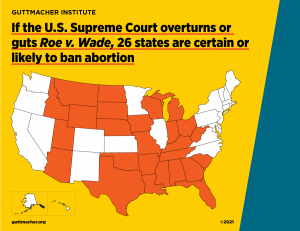 If Roe v. Wade were to be overturned, a majority of states are likely to ban abortion.
| Credit: Guttmacher Institute

Another five states are considered “likely” to ban abortion based on their “political composition, history, and other indicators — such as recent actions to limit access to abortion,” according to the analysis.

Of the 21 states that would likely ban abortion, 12 currently have a “trigger” ban or law in place, according to Guttmacher Institute. Those 12 states are Arkansas, Idaho, Kentucky, Louisiana, Mississippi, Missouri, North Dakota, Oklahoma, South Dakota, Tennessee, Texas, and Utah. The mechanisms vary state to state, but the laws would overall ban or restrict abortion if Roe is overturned.

“Trigger laws are really an entirely new category of law that we’ve never seen before, in any area, whether we’re talking about abortion rights or something else,” explains Jessica Arons, seniors advocacy and policy counsel for reproductive freedom at the American Civil Liberties Union.

Arons says that the laws in these states might be weaponized against abortion provides if Roe is overturned. She goes on to explain that even if these states don’t immediately begin enforcing these pre-Roe bans on abortion, it’s possible “that there will be a chilling effect and that the abortion providers in those states will be afraid to continue providing abortion care, for fear that those laws could be used against them.”

Of these 13 states, Texas is the only one where the ban is actually in effect. If Roe were to be overturned, however, these bans are likely to go into effect.

“It’s meant to preempt and prohibit the state Supreme Court from interpreting the state constitution to include a right to abortion,” Arons explains.

Distance for an Abortion

In December of 2021, the California Future of Abortion Council and members of the state Legislature announced a plan to make California an abortion sanctuary, which is much needed for many people throughout the entire country. 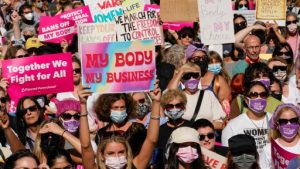 People needing an abortion that live in states with bans will face severe travel distances.

Abortion clinics are preparing for a “post-Roe world” where abortion would be, once again, made illegal in roughly half the country.

Taking into consideration a total ban of abortions, people would have to drive 11.5 times as many miles, on average to reach an abortion clinic. The farthest drives would come from Louisiana at 666 miles, Florida at 575 miles, and Texas at 542 miles, according to a U.S. News analysis of data from Guttmacher Institute.

Due to their proximity to states with abortion bans, North Carolina, Illinois, and Kansas will likely see the largest influx of people seeking abortions and making these long drives.

Emily Wagster Pettus, a correspondent out of Jackson, Mississippi, says, that if the Supreme Court decides in favor of Mississippi, there would be “a whole swath of conservative states in the southern U.S. where women wouldn’t be able to access abortion services. That means that women in those states would either have to travel long distances to California, places like that, or they would just be unable to afford to travel and they would end up carrying those pregnancies to term, or possibly seeking illegal ways to terminate pregnancies.”

The Life and Accomplishments of Ruth Bader Ginsburg

Be the first to comment on "Roe v. Wade in Peril with the Hearing of Mississippi Abortion Case"