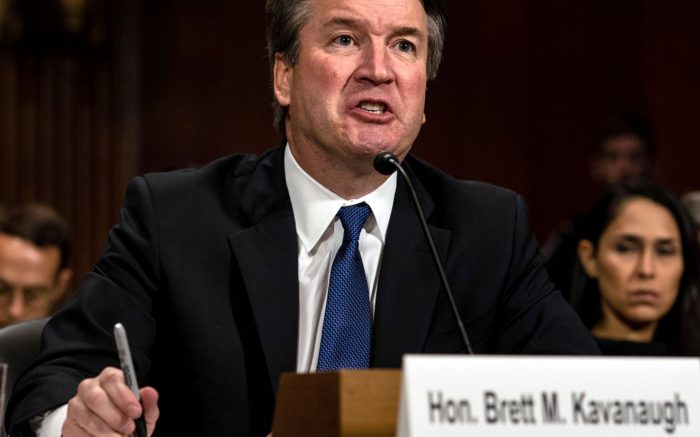 I consider myself a fairly politically-aware person. I read the news at least once a day, often more, and can hold my own in a heated political debate. I’m not quite sure what it is about the field that captivates me. I think it might be that I have always believed the most permanent change is created on a systemic level, and the government is one of the most powerful systems there is. See, as much as people complain about political corruption, I have always believed on a visceral level that the political system does its job. After all, I am allowed to write this piece, allowed to protest, allowed to criticize, allowed to vote. I have always believed that politicians began their careers with good intentions, wide-eyed and with the belief that they could truly create change. I have always believed that politics is a noble pursuit, one that I have seriously considered as my own potential career path. I have always humanized the figures that make up our government: the Senate has had a desk filled with candy since 1968 (currently occupied by Senator Pat Toomey), my congressional representative sat two rows behind me at my synagogue this past Yom Kippur, Ruth Bader Ginsburg, and Antonin Scalia, Supreme Court Justices with fiercely differing views, were very close friends who attended operas together. They’re just like us.

Over the past few months, however, that assertion has been challenged. I’ve found it harder to convince myself to stay up-to-date on the news, found it harder to even engage in political conversations. I felt that, by aligning myself with certain political beliefs, I was making a statement about myself, a statement that was inextricably tied to my identity, a statement that many people were unable to look past. It was impossible to have a true, open conversation. It is impossible to have a true, open conversation.

Anthony Kennedy’s retirement was unquestionably a political move designed to allow the Supreme Court to have a conservative tilt for generations to come. Discounting the fact that Supreme Court justices are supposed to judge on the strength of the law and that their previous political biases should not be as large a factor as they are, or the fact that my generation – the generation directly affected by the rulings of this Supreme Court – is unable to vote and therefore has zero sway in shaping the judicial law that will govern us, I understand that an unfortunate reality of a majority/minority political system is that the party in charge scrambles to enact as many policies and nominate as many judges as possible in the two years or more in which they hold power. This is true of both Democrats and Republicans. I repeat: this is true of both Democrats and Republicans.

Even so, an Associate Justice nominee for the Supreme Court has never before been accused of multiple sexual assaults in the shadow of the #MeToo movement. And, while we can speculate all we want about how Democrats would have handled this scenario, the fact is that speculation will only go so far. This is not about the Democrats. This is about the Republicans and their handling of Kavanaugh’s nomination, which is not only shameful but downright detrimental to the very pillars of our democracy (yes, Jeff Flake, that includes you).

I am going to make my biases very clear. I believe Christine Blasey Ford. I know that there has not been a real trial and the results of FBI investigation (if the rushed timeline and limited scope can be called an investigation) have not yet been made public, but I look into her terrified eyes and hear her voice cracking as she fights to maintain her composure and think that, if we can accept that she is not being paid off by George Soros, then she has nothing to gain and everything to lose by introducing these allegations. I think about how, if she was lying, her memory would likely be crystal clear and would involve only her and Kavanaugh, not a third person. I believe Christine Blasey Ford, and I also believe that Brett Kavanaugh is a liar. He lied when he said that he didn’t know what “boofing”, “Devil’s Triangle”, and the “Ralph Club” were (words in his yearbook referencing lewd sex acts and drinking games), he lied when he said that he never drank in excess (Mark Judge’s memoir and his own yearbook beg to differ), he lied about his knowledge of illegally-obtained Democratic memos under oath in 2004, 2006, and then again in 2018, he lied when he claimed in 2007 that he did not formulate policy surrounding the war on terror, he lied and he lied and he lied again because he never received punishment for doing so previously.

I believe that Kavanaugh is not the only one, that he is part of a fraternity of powerful white men who share equal beliefs of entitlement and will do whatever it takes to preserve their political positions as well as the positions of those who surround them. I also believe (and Kavanaugh said as much himself) that he feels entitled to this lack of punishment, that his attendance at an elite preparatory school and admission into a prestigious university should afford him more leniency than the “common person.” I know these men, I went to school with these men, I heard these men at a restaurant just the other day angrily muttering that he is “someone’s son” and that “if it didn’t bother her in high school, why should it bother her now?”

These are the facts:

In his confirmation hearing, Neil Gorsuch, a Supreme Court Justice nominated by President Trump, said that “there’s no such thing as a Republican judge or a Democratic judge.” In Brett Kavanaugh’s hearing, he himself said that “…a federal judge must be independent… I said I was such a judge, and I am.” The sentence before, he railed against what he called a ploy to undermine his confirmation:

“This whole two-week effort has been a calculated and orchestrated political hit, fueled with apparent pent-up anger about President Trump and the 2016 election. Fear that has been unfairly stoked about my judicial record. Revenge on behalf of the Clintons, and millions of dollars in money from outside left-wing opposition groups.”

Left-wing opposition groups. The Clintons. Brett Kavanaugh has made an unmistakably partisan (and hypocritical) comment in his quest to enter what both him and the previously-confirmed Justice called an “objective institution.” The two cannot be reconciled.

Susan Collins and Lisa Murkowski, both Republican women who have voted against their party bloc in the past, have to answer to female constituents who have protested, tweeted, and wept in full force. The Republicans can afford to lose two members of their party, provided that Democrats all vote together.

Jeff Flake, a key swing vote, claimed on 60 Minutes that, if it can be proven that Brett Kavanaugh committed perjury, his confirmation quest will be over (implying that he will vote no and at least one other Republican will vote no as well). The legal principle falsus in uno, falsus in omnibus (false in one, false in everything) means that, if a witness can be found to have lied about one aspect of their testimony, their entire credibility is called into question and can be voided. Though the FBI Investigation has limitations, at least one witness who they are interviewing will allegedly directly contradict Kavanaugh’s claims that he was not a heavy drinker.

The FBI Investigation will also allow for Mark Judge, Kavanaugh’s friend, to speak without the shield of a lawyer’s written statement. His book, entitled Wasted: Tales of a Genx Drunk, mentions a character named Bart O’Kavanaugh. Sound familiar? Judge’s ex-girlfriend, Elizabeth Rasor, claims that Judge mentioned to her an instance in which he and a group of boys took turns having sex with a drunk woman. Julie Swetnick has accused both Kavanaugh and Judge of gang-raping her as well as multiple other females.

In a letter from 1983 about a beachfront vacation, Kavanaugh wrote that whoever arrived first should “warn the neighbors that we’re loud, obnoxious drunks with prolific pukers among us. Advise them to go about 30 miles…” Later, he writes, “I think we are unanimous that any girls we can beg to stay there are welcomed with open….” (Kavanaugh actually handwrote those ellipses, and we can safely assume that they do not imply “open hearts”). He then wrote that “[T]his week has big potential. (Interpret as wish).” When asked if he ever passed out from drinking, he replied that “I — passed out would be — no, but I’ve gone to sleep, but — but I’ve never blacked out.”

In a 2015 speech given at Catholic University’s Columbus School of Law, Kavanaugh stated his high school’s unofficial mantra that “we’ve held firm to, to this day:”

He commented after, “That’s been a good thing for all of us, I think.”

A Kavanaugh confirmation at this point will be catastrophic, and not just because an accused sexual assaulter will be on the highest court (Clarence Thomas has that title) but because of what message it will send to teenagers, women, and American citizens in general.

It will remind women that #MeToo is powerless in the face of politics and privilege, that the blow to a man’s reputation supersedes the psychological and bodily trauma of a sexual assault and that they are to blame for not reporting their assaults sooner or for any memory lapses that may occur from the trauma.

It will teach men that they are unaccountable for the first eighteen years of their life, that it is always better to lie than to risk a loss of power – whether for them or for a member of their brotherhood – and that they inherently deserve the world, no matter what they have done or what they need to do to reach the top.

In Kavanaugh’s testimony, he says that he fears for the future. I fear for the future as well, more so than ever before. In fact, I am absolutely terrified. We are entering a danger zone, and we are crossing into the point of no return.

This is about Brett Kavanaugh, but it is also so much more. It is about the nature of a political system that allowed a Republican senator to vote Kavanaugh’s confirmation through the Judiciary Committee and then, seconds later, ask the Chairman what he had just voted for, one that focuses on undoing what the previous party in power had built instead of forging a common path forward together, one that is so focused on advancing a political agenda that it utilizes real women who have endured real trauma as pawns in a game that they should be ashamed of playing.