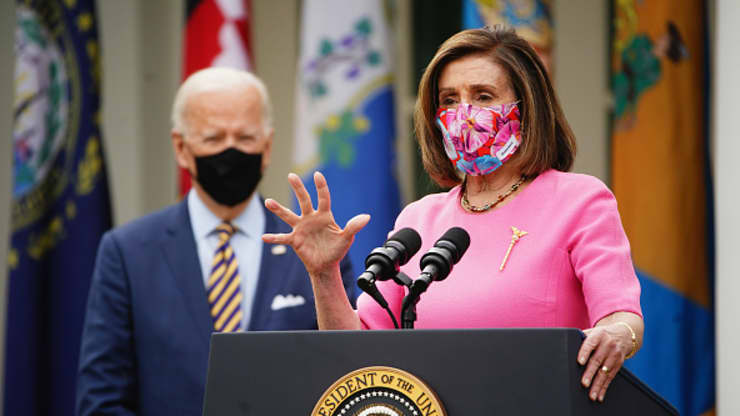 House Speaker Nancy Pelosi, a Democrat from California, gives a speech during an event in the Rose Garden of the White House in Washington, D.C., on Friday, March 12, 2021 | Credit: Jim Lo Scalzo

Many of the spending items in the tax bill Democrats are negotiating could be described as radical. After all, if we had reduced the cost of child care, expanded educational access, reduced poverty, and more efforts to fight climate change, our lives would be so much better.

But there’s nothing radical about how Democrats are proposing we pay for these changes. Many Republicans, and even some Democrats, however, are proposing that this bill is the start of great change in America.

Here are some major features of the multiple different proposals being circulated:

Even some Democrats believe these reforms are radical and are pushing them to the right because of it. In fact, House Democrats have drafted a version of the tax proposal that omits a provision sought by President Biden that would close a loophole allowing the wealthy to pass large estates down to heirs with much of it escaping taxation permanently.

Conservative Democrats are worried about being accused of hurting family farms. In turn, the Democrats who are afraid of this are letting the Republican lie that estate taxes targeting multi-million-dollar fortunes hurt family farms get repurpose to be applied to the so-called “stepped-up basis.”

The stepped-up basis involves assets that are held and not taxes throughout a wealthy person’s life and are then passed on to an heir. These assets are only taxed at the point of sale, based on how much value they gained. The appreciation of their value is calculated for future tax purposes only by measuring that appreciation from that point of transfer onward. This cancels the gains that occurred up to that point meaning that no one is ever taxed.

However, according to a senior Senate Democratic aide, “the current negotiations had already carved out an exemption for family-owned farms that would only tax gains valued from $25 million and up.” With this exemption, it’s hard to see how it would permit any actual harm to any family farms.

If the provision does die, however, tons of wealth could escape taxation permanently. All of this comes from the idea that there’s anything remotely radical about Biden’s tax plans.

While “trillions of dollars in new taxes” does sound very scary — especially to the average person — the tax plans are much more than that.

All in all, it is a substantial increase in taxes and spending, but not something that’s going to transform the American economy.

All of that, however, is on a large scale. What about the individuals? Who will be affected? How will billionaire investors be affected? Wealthy tax cheats? Corporations that drag in billions of dollars every year and ignore their taxes on top of it?

They’re all going to be okay.

Many of the changes that Democrats want to make are simply reversing parts of the Republicans’ 2017 tax cut. Paying taxes like how we did five years ago is nowhere near a radical change.

The overall, big picture is that the 2017 tax cut was the height of a period of relentless tax-cutting for the wealthy and corporations dating all the way back to the 1980s. In 1980, the top marginal income tax rate was 70 percent, which is about twice what it is now. The rich spent twice as much on taxes but half the time whining about how oppressed they were by taxes than they do today.

That period of tax-cutting was real. What Democrats are currently attempting is nothing more than a little nudge toward the right direction.

Be the first to comment on "Democrats Want to Tax the Very Rich: Stop Saying it’s Radical"