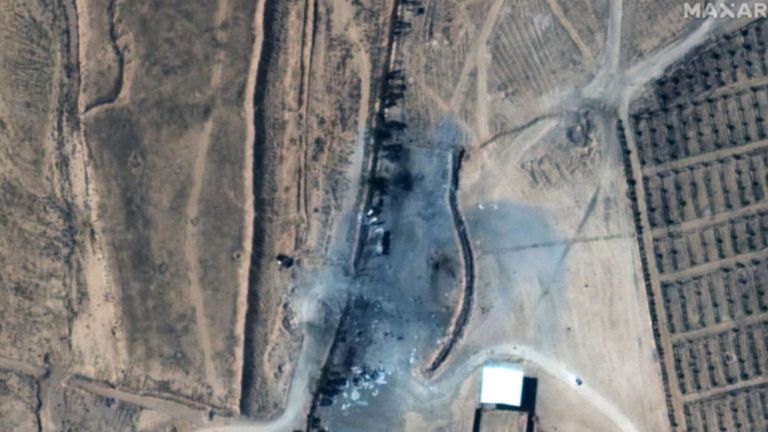 On his 36th day in office, February 25th, at 6 pm EST, President Joe Biden approved an airstrike in Syria which is the President’s first known military action. He is the fifth consecutive president to order strikes in the Middle East.

U.S. airstrikes targeted bases in Syria used by two Iranian militant groups suspected of attacking American and allied forces in northern Iraq. The administration dropped seven 500-pound bombs on the facilities that were used to smuggle weapons. They were in response to rocket attacks on American forces over the last two weeks that killed a contractor and wounded U.S. and allied troops.

“The operation sends an unambiguous message: President Biden will act to protect American and Coalition personnel,” Pentagon spokesman John Kirby said in a statement. “At the same time, we have acted in a deliberate manner that aims to de-escalate the overall situation in both eastern Syria and Iraq.”

Defense Secretary Lloyd Austin told reporters that he’s “confident in the target that we went after, we know what we hit…we’re confident that that target was being used by the same Shia militants [who attacked US troops].”

Biden’s decision to attack in Syria doesn’t seem to indicate an intention to widen U.S. military involvement in the Middle East, but rather to demonstrate a disposition to defend troops in Iraq. “I directed this military action to protect and defend our personnel and our partners against these attacks and future such attacks,” Biden wrote in a letter to Congress.

Iran’s foreign ministry condemned the strikes and denied responsibility for the rocket attacks on US targets. Spokesperson Saeed Khatibzadeh, referring to Israeli aerial attacks on Syria, called the airstrikes a “continuation of constant Zionist regime raids on Syrian soil.” Iranian Foreign Minister Mohammad Javad Zarif said the U.S. strikes were “illegal and a violation of Syria’s sovereignty,” according to reports from Iran’s state media.

This move has received extensive criticism, considering its stark contrast to his campaign promise of ending forever wars. Biden asserted that military force will always be an option, but must be defined with an achievable mission only as a “last resort.” The White House has said the strikes were backed by Article II of the Constitution as well as the UN charter. The original plan included another strike site near the Syrian city of Albu Kemal, but out of concern for civilians in the area, it was dismissed, according to a US defense official.

Congressional Democrats criticized Biden’s decision to move forward with the attacks without conferring with all of Congress. A statement from Sen.Tim Kaine D-VA, a member of the Senate Armed Services Committee, requested a briefing from the Biden administration on the decision-making behind the airstrikes:

“The American people deserve to hear the Administration’s rationale for these strikes and its legal justification for acting without coming to Congress. Offensive military action without congressional approval is not constitutional absent extraordinary circumstances”

Ilhan Omar Tweet pointing out the hypocrisy in criticism.

“there is absolutely no justification for a president to authorize a military strike that is not in self-defense against an imminent threat without congressional authorization. We need to extricate from the Middle East, not escalate.”

However, the Pentagon did inform congressional leadership before acting, according to a National Security Council spokesman.

Be the first to comment on "President Biden’s Syrian Airstrike"