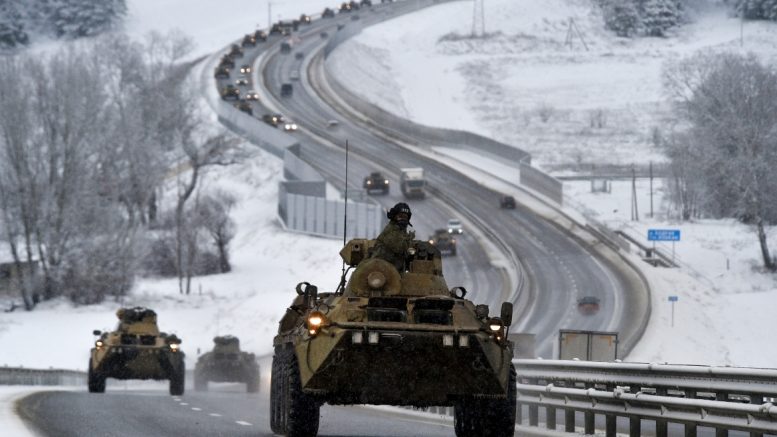 A convoy of Russian armored vehicles moves along a highway in Crimea | Source: AP Photo

Alarm bells have been sounding across Europe in recent months due to a buildup of Russian troops along Ukraine’s border. Russian President Vladimir Putin is said to be considering a repeat of 2014. During that period, Russian forces seized the Crimean peninsula and supported a separatist, pro-Russian insurgency in eastern Ukraine’s Donbas area.

Moscow rejects any idea of invading and has been vocal in its opposition to any expansion of the US-led North Atlantic Treaty Organization. However, US officials have stated that such a move is possible—a point underlined by President Biden on Wednesday—and that more military equipment, including tanks and rocket launchers, has been deployed westward into Ukraine in the last week.

Following months of rising tensions, US President Joe Biden stated on Jan. 19, 2022, that he believes Russia will invade Ukraine and warned Russian President Vladimir Putin that he “will regret having done it.”

Boris Johnson said: “The intelligence is very clear that there are 60 Russian battle groups on the borders of Ukraine, the plan for a lightning war that could take out Kyiv is one that everybody can see. We need to make it very clear to the Kremlin, to Russia, that that would be a disastrous step.”

Mr. Johnson added that the UK stood “four-square with the people of Ukraine.”

How are Russia and Ukraine Linked Historically?

Russia and Ukraine share strong cultural, economic, and political ties, and Ukraine is integral to Russia’s identity and global perspective.

Family ties. Russia and Ukraine have a long history of deep familial ties. Kyiv, Ukraine’s capital, is frequently referred to as “the mother of Russian cities,” equaling Moscow and St. Petersburg in terms of cultural importance. Christianity was introduced to the Slavic peoples from Byzantium in Kyiv in the eighth and ninth centuries. Also, it was Christianity that held Kyivan Rus together, the early Slavic nation from which current Russians, Ukrainians, and Belarussians descend.

Russian diaspora. The wellbeing of the nearly eight million ethnic Russians residing in Ukraine, especially in the south and east, is one of Russia’s top priorities, according to a 2001 census. As a justification for its operations in Ukraine, Moscow claimed a responsibility to defend these individuals.

Superpower image. After the fall of the Soviet Union, many Russian leaders saw the breakup with Ukraine as a historical blunder and a danger to Russia’s status as a great power. Many saw Russia’s international standing being harmed by losing a lasting grip on Ukraine and allowing it to drift into Western hands.

Why Does Putin Care if Ukraine Joins NATO?

NATO was established in 1949 to counter Soviet aggression. Since then, the alliance has grown to include 30 nations, including Estonia, Latvia, and Lithuania—all of which were once Soviet republics. According to the treaty, if one of NATO’s members is invaded or attacked by a third party, the entire alliance will mobilize to defend it.

The Kremlin wants NATO to guarantee that Ukraine and Georgia, another former Soviet republic that Russia invaded briefly in 2008, will not join the alliance. According to the Biden administration and NATO partners, Putin cannot deny Ukraine that right, but there are no plans to offer Ukraine membership anytime soon.

NATO’s footprint along Russia’s borders will grow if any nation joins the organization.

What Parts of Ukraine Does Russia Currently Control?

Crimea was transferred from Russia to Ukraine by Soviet leader Nikita Khrushchev in 1954 to establish “brotherly connections between the Ukrainian and Russian peoples.” Since the union’s dissolution, many Russian nationalists in Russia and Crimea have yearned for the peninsula’s restoration. Sevastopol is the home port of Russia’s Black Sea Fleet, the region’s most powerful marine force.

Russian military forces annexed Crimea on the Black Sea in 2014. Separatists supported by Moscow have also taken control of the eastern industrial areas of Donetsk and Luhansk, which are close to Russia. Approximately 14,000 people have died due to the continuing violence in eastern Ukraine.

What Could the West do in Response to a Russian Invasion?

According to Downing Street, the leaders agreed that if there was another Russian incursion, “allies must implement prompt retributive steps, including an unprecedented package of sanctions.”

However, the UK previously stated that there were no intentions to send British combat soldiers to Ukraine to defend the country.

According to officials, there have been no explicit threats to British diplomats, but around half of the personnel in Kyiv will return to the UK. The US has urged families of its embassy workers to leave, stressing the possibility of an invasion “at any time.”

Liz Truss, the UK’s Foreign Secretary, said: “We will denounce any attempt by Russia to undermine democracy, destabilize Ukraine, or engage in false flag operations or sabotage. We’ll make a note of it.”

She claimed the UK had a “very powerful package of sanctions ready to go.” In the case of an incursion into Ukraine, Germany’s Nord Stream 2 gas pipeline to Russia should be stopped, adding that she was “very, very worried” about Europe’s energy dependency on Russia.

What do the People of Ukraine Want?

Despite Ukraine’s efforts to join NATO and the EU, recent surveys show that public opinion on these issues is divided. While more than half of those polled (excluding residents of Crimea and disputed eastern areas) support EU membership, just 40 to 50 percent support NATO participation.

For people in Ukraine, the question is not will there be war, but will this war escalate? Meanwhile, somewhat normal life continues as the people of this country wait nervously to see what fate and larger geopolitical forces have in store.

Updates on the Conflict Between Russia and Ukraine