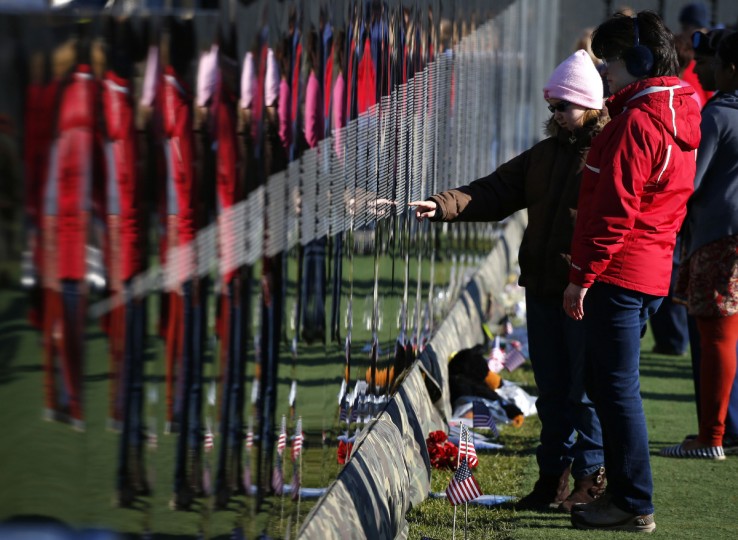 This Monday, Major Vincent Enriquez, an alumnus of the Academy and former Student Council President, came to speak about the importance of Veteran’s Day and his experiences serving in the military. Ironically, during a discussion on duty, honor, and service to others, hundreds of current IMSA students were elsewhere. On this same day, someone asked me if she, referring to the speaker, was cute and someone else insisted that he gave his presentation over Skype.

This article is not meant to be a guilt trip, merely a reflection on the very values that Major Enriquez discussed: duty, honor, and service. I was reminded of these values for a second time today when State Representative Chapa LaVia insisted on taking Anthony Marquez, Ryan Leemans, and me to go visit The Moving Wall memorial at Aurora West High School. It is a half-size replica of the Vietnam Veteran’s Memorial in Washington, D.C. that has been touring the country since 1984, and it was stationed in Aurora from November 7th to 11th.

While slowly walking through the memorial, I reflected on the immense sacrifice that so many men and women had made for the safety of our country and way of life. I thought about how easy it would have been for my own grandfather to have died while serving in the Vietnam War so many years ago. A difference of a few seconds meant the difference between life and death, between my existing and not. He could have been one of the millions who made the ultimate sacrifice for the ones they loved. His family could have been one of the millions who lost one of their own, one of the families filing through the memorial leaving notes, flowers, statues, and tears.

As I stood in the freezing rain, listening to the man who had successfully lobbied to bring the Wall to Aurora talk about how one of his friends had died mere feet away from him, I choked back tears of my own. As he touched the names of his two fallen comrades, I was filled with a strange mixture of emotions: sadness, respect, and, for the first time, patriotism. I wondered why nobody among all of the posters, emails, announcements, and Facebook posts…no one had mentioned that this was a few blocks away from campus. I wondered why so many people thought that they had better things to do with their time than spend half an hour listening to an alumnus who has spent years of his life selflessly serving our country and providing for our safety speak about duty, honor, and service to others.

The more I think about it, the more I become convinced that the reason so many people didn’t hear his message was because our community sorely needs to hear it. In a vicious cycle, our culture of apathy and self-importance prevented many of us from hearing an expert in passion and humility speak. I do not claim to be above this phenomenon. Like many, I often find myself thinking that I don’t have time for this or that because of everything else going on. I often make excuses to avoid contributing to the community as much as I should. I, like you, desperately needed to learn about duty, honor, and service to others.

I needed a reminder of my duty to this community and to those around me, of the need to serve others. Given the amount of melancholy and depression on campus this year, everyone needs a reminder of these values. We cannot let ourselves forget the importance of supporting each other. After years of sleep deprivation, malnutrition, feeling inadequate, and being mentally burnt out, it is easy to forget that we need to take care of others. No one can make it through IMSA alone, and as of late the support system has not been there for far too many.

To conclude, the poor attendance at the mandatory assembly was just a symptom of a much greater illness. As IMSA students, we need to realize that we are not the center of the universe. For the future of this school and for the emotional health of its current students, we need to give up the mindset that led so many people to miss out on such an important message. Like the millions of veterans whom we were supposed to honor on Monday, we need to embody duty, honor, and service.

To my fellow seniors, I know how easy it is to stop caring. We are so close to leaving this place forever that it is too easy to forget that the juniors, sophomores, and future classes are not. Don’t give up yet. I challenge you to set an example for them, to make sure that this melancholy is banished from campus and that it never returns. Finally, I challenge you to take a moment to reflect on duty, honor, and service.

OP: The Truth about the Innovation Hub

A Splash of Color, Leaves and Fun

IN FOCUS: Diwali and Swim Take IMSA by Storm

Be the first to comment on "IMSA’s Stationary Wall"