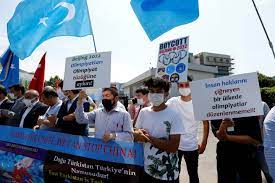 Uighurs in Turkey Express Support for US Boycott of Beijing | Source: Reuters

The 2022 Beijing Winter Olympics kicked off February 4th with the opening ceremony held at the city’s National Stadium, making Beijing the first city to hold both winter and summer Olympics. The running of this Olympics, however, has been altered in the face of COVID-19. Spectators will be limited with no in-person internationals allowed, and other spectators subject to strict COVID-19 prevention measures. Further, those involved in the event itself will be confined to a “closed loop” of transportation, accommodation, and venues as a part of additional mitigation efforts.

For many countries, worries of COVID-19 in Beijing have been superseded by protests against China’s human rights record. Some nations have declined to attend the Games, and others have diplomatically boycotted them with the US among these. American athletes will be permitted to compete, but White House Press Secretary Jen Psaki said in a briefing Monday that “the Biden administration will not send any diplomatic or official representation” to Beijing because of China’s “ongoing genocide and crimes against humanity in Xinjiang and other human rights abuses.” Psaki continued that, though “the athletes on Team USA have [the Biden Administration’s] full support,” the Administration “will not be contributing to the fanfare of the Games,” as “US diplomatic or official representation would treat these Games as business as usual in the face of [China’s] egregious human rights abuses and atrocities in Xinjiang.”

Countries that will not be attending—but are not boycotting—include Norway, Sweden, and Germany, whose leaders, traditionally present at the Olympics, will sit these Games out.

Other countries have decided not to attend because of the pandemic, or both the pandemic and diplomatic protest.

This protest comes as upwards of a million Uighurs have been imprisoned in line with China’s “intensive counterterrorism and de-radicalization efforts.” The Uighurs are a mostly Muslim, Turkic-speaking ethnic group primarily hailing from Xinjiang, a northwestern region that has been claimed by China since the Chinese Communist Party (CCP) came to power in 1949. Given the CCP’s atheism, past Uighur independence movements, and the CCP’s fear of separatism, the CCP perceives the Uighurs as a threat. This perception has led to the creation of what China has termed “vocational education and training centers,” camps China claims promote, among Uighurs, “knowledge of the law through education.”

Though “re-education efforts” began around 2014, and the CCP-Uighur conflict long before that, the camps have significantly expanded in the time since. Information on what happens to imprisoned Uighurs is limited, but escapees have reported having to pledge loyalty to the Chinese Communist Party, renounce Islam, and learn Mandarin, which is echoed by leaked government documents. Some escapees have also said that they were monitored constantly by cameras and microphones, while others recall torture, interrogation, sexual abuse, or rape.

In response to the US’ diplomatic boycott, the Chinese Embassy in Washington tweeted: “In fact, no one would care about whether these people come or not, and it has no impact whatsoever on the #Beijing2022 to be successfully held.” Australia, upon announcing that it, too, would boycott the Games, was said to have “fully expose[d] that it blindly follows the US [and] not know right from wrong” by the Chinese state-run Global Times. As the US and Australia are both slotted to host the upcoming Olympic Games, there is potential for China to impose boycotts in response.

Additionally, a handful of countries are boycotting Beijing in diplomatic protest of other events. Kosovo and Lithuania will not be sending diplomatic delegations because of the state of their relationships with China, which have been colored by the countries’ ties with Taiwan. India, too, has declined to send officials to Beijing after a Chinese military commander who was reportedly involved with deadly conflict on China’s border with India, was named Olympic torchbearer.

Ukraine on Edge Amid Fears of a Russian Invasion

Be the first to comment on "Beijing Olympics Began Amid Boycotts"