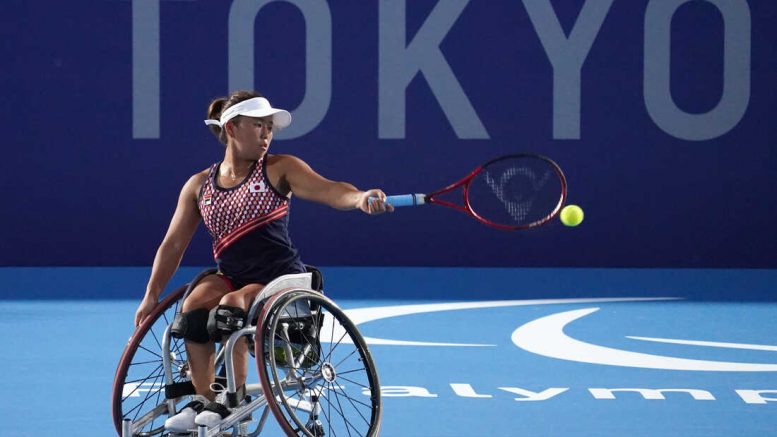 TOKYO, JAPAN - AUGUST 22: Yui Kamiji of Team Japan in action during a training session ahead of the Tokyo 2020 Paralympic Games at Ariake Tennis Park on August 22, 2021 in Tokyo, Japan. (Photo by Toru Hanai/Getty Images for International Paralympic Committee)

Just a few weeks ago, the Paralympic Games came to an end after a year-long hiatus. Held from August 24, 2021 to September 5, 2021, the Games broke numerous records, achieved new milestones, disproved ableist stigmas, and forged deeper connections with the disabled community. Featuring over four thousand athletes from nearly eighty countries in over twenty-five sports, the event transcended political and geographic barriers to unite disabled athletes from across the globe.

To fully understand the Paralympics, one must understand its history. Sports for those with disabilities have existed for over a century — specifically, games for deaf athletes have existed since 1888. Yet, these games were not popularized until after World War II, when Dr. Ludwig Guttman instituted recreational and competitive sports for injured veterans. Guttman brought the games to a new stage during the London Olympics (1948) when sixteen disabled athletes competed in an archery game through what was called the Stoke-Mandeville Games. These games eventually morphed into the Paralympic Games during the 1960 Rome Olympics, in which four hundred athletes participated.

To better manage the growing number of disabled athletes in the Paralympic Games, the International Paralympic Committee (IPC) was born. The IPC continues to manage and organize the Paralympic Games every four years, and the event has grown from mere hundreds to thousands of athletes.

Despite this rather fascinating history, issues persist with the Paralympic Games, such as frequently being overshadowed by their counterpart, the Olympic Games, and news outlets continuing to disseminate harmful stereotypes.

Tony Pauls, a Paralympic gold medalist, distinctly summarizes the lack of coverage of Paralympics, both this year and since the formation of the Paralympics:

“Why is it that NBC will treat these athletes like — and I hate to say it — second-rate athletes? Give them a chance. NBC spends so much time and effort covering Phelps, the NBA Olympic team, and other athletes because they are or can become household names. Networks find stories that make you cry. Well, follow these phenomenal athletes and learn what they had to endure to be where they are, and you would be surprised.”

Fortunately, change has begun to occur. For the first time, the Paralympic Games will hold a prime-time slot on NBC, which will now air “more than 1,200 hours of programming across its TV and digital channels.” Though a promising move, the multiple decades it took to implement this change continue to serve as a reminder of the systemic marginalization of disabled athletes and the disabled community at large. Moreover, resources for Paralympians, “from news media coverage to sponsorship deals, still hardly approach what is available to Olympians.”

The terminology utilized by media outlets is also quite concerning. Several outlets, in the last few days of the Olympics, joyfully expressed, “our athletes are all coming home!” Yet, our athletes were not ever coming home. As some flights came back home, thousands of Paralympians were leaving their homes to attend their own games. Media outlets overlooked Paralympic athletes, much like how only 50.1% of respondents in a survey (n=3000) were aware of the Rio Paralympics, 2020.

Oftentimes, the Paralympic Games become a metric. The accolades and achievements of disabled athletes become a comparison factor for abled athletes, commonly taking shape through expressions such as,

All this does is devalue the accomplishments of disabled athletes and reorients the Paralympic Games around abled athletes, rather than athletes with disabilities.

Issues exist within the Paralympic Games itself, rather than just depictions in news media. Just a few weeks ago, renowned swimmer, Becca Meyers, was forced to sit out from the Paralympics after the U.S. Olympic & Paralympic Committee (USOPC) prohibited her from bringing a personal care assistant to Japan due to “coronavirus restrictions on athletic delegations.”

Meyers, “angry, disappointed, sad to not represent her country,” is diagnosed with Usher Syndrome, making hearing and sight challenging (an effect only amplified by the presence of masks). USOPC’s response to public backlash following the decision is only more concerning; Rick Adams, a member of USOPC’s Executive Team, expressed that he “empathized with [Meyers’s] concerns.” Yet, Adams’ response, from an able-bodied perspective, stems from pity and hardly from equity. Adams serves as an ideal example of the issues of the Paralympic Games. If the International Paralympic Committee (IPC) itself cannot accommodate the needs of disabled athletes, then how can it claim to advance disability rights or be permitted to hold an international event aimed to celebrate the experiences of the disabled community?

IPC’s defined categories of disabilities only worsen this issue; presenting merely ten categories of disabilities, thousands of disabled athletes fall through the cracks and have been barred from participating. George Bates, an internationally recognized disability rights advocate with complex regional pain syndrome (CRPS), expresses that they would “not be able to compete in the Paralympics because their disability does not fit into the IPC’s rigid categories.” The nearly 20,000 signers of Bates’ petition share this sentiment and also find concern with IPC’s criteria of someone having to be “disabled enough” to participate.

Reform must occur, and this begins with us. With the upcoming Paralympics just around the corner, let us reflect on the historic marginalization of disabled athletes and prepare ourselves to properly cover the Paralympics. Let us converse about the history of the Paralympics.

The Ethics of Banning Moves in Sports

Be the first to comment on "Analyzing the Paralympic Games: The History, The Issues, The Change"