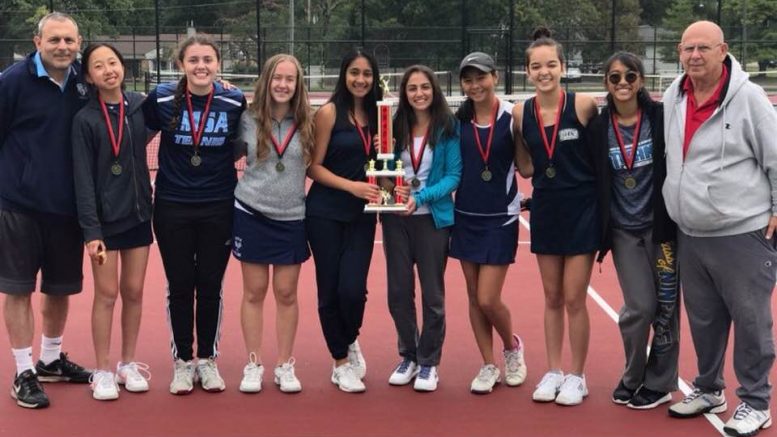 The IMSA girls tennis teams had an amazing season this fall and are hoping to continue the momentum into next year. After a great performance at sectionals, two of our very own peers, Marisa Patel-O’Connor (‘19) and Arohi Singh (‘20), recently went to IHSA state and placed in the top 16 for doubles. Congratulations to them and the rest of the team for an amazing season!

The life of a student-athlete is not easy, and it can be hard to balance the stress of schoolwork and sports, especially at IMSA. According to Arohi Singh, “The hardest part of being a student-athlete at IMSA is how much class I have to miss.” The tennis team often has to miss classes at the end of the day in order to go to games with other schools, whose school days end earlier. Additionally, the two to three hours spent on tennis games or practices has taken a lot of time out of players’ schedules.

However, the hard work and dedication that the athletes have shown despite missing classes have certainly paid off. Singh said, “Going to state was definitely one of the best experiences I’ve had at IMSA so far. I got to meet all these amazing tennis players from all over the state, and everyone was so good! It was a lot of hard work and patience to make it to state, but all of that work was completely worth it!” Arohi had a great time at state and it was certainly a great opportunity to play with a wide variety of opponents.

You might be surprised to learn that despite their success, the girl’s tennis teams actually do not have tennis courts on campus to practice on. While courts may be seen on IMSA’s campus, they are in too much disrepair to be used by teams. Whenever the girls have to practice, they board a minibus promptly after school and are taken off campus to tennis courts. Last year, the commute to the courts could take up to 30 minutes, but they were able to score a couple more local destinations this year. The team is hoping that home courts are ready to play on for the following team. Singh said, “I truly believe that if that happens, and we can practice more, the tennis team can become so much better.” Hopefully, IMSA will consider investing in renovations for the athletic facilities.

For the two top-state doubles partners, Marisa Patel-O’Connor and Arohi Singh, their dedication and hard work have paid off. They and the rest of the tennis team have had some great victories this season and are looking to have an even greater season next year.