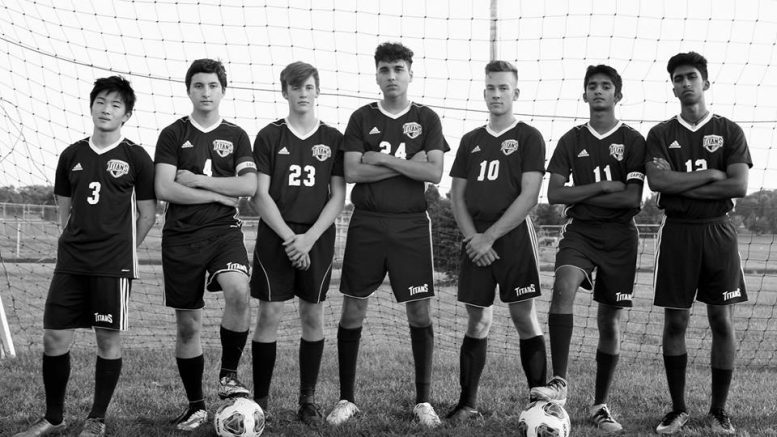 Seniors on the soccer team pose for the last time together. Source: ISP's Briella Henderson

Another historic season for the IMSA boys’ soccer team has come to an end. For the second consecutive year, our fearless warriors on the soccer pitch have won a regional game, a feat many other sports at IMSA have not yet achieved. It was a well-deserved culmination of all their hard work during the regular season, which consisted of a conference championship and a 14-4-1 record. “It was also a pretty good way to end my senior year. It feels good to know that I was part of one of the best teams to come through this school,” says star forward and one of the captains of the team, Chetan Reddy (’19).

The first regional game was played against Ottawa and required immense grit from the Titans. Ottawa was leading 1-0 at halftime but in the second half, Alex scored two goals and Chetan scored one as opposed to only one more scored by Ottawa. The game was won 3-2 by IMSA, sending them to their second ever regional final. The final was no easy task as IMSA stacked up with a very strong Lemont team that went 13-7 over the regular season. The game was tied at one goal each for most of the game but with fifteen minutes left, Lemont scored another. The score was stagnant for the rest of the game, handing IMSA the loss.

Although the loss is disappointing, IMSA’s team should be proud of the season they had. Their efforts have shone a brighter light on IMSA athletics, hopefully forcing opponents to start treating our teams differently. While the players have had much to do with their accomplishments, credit should be given to their coaches, Josiah Payne and Dan Talancon. Chetan acknowledges their efforts with tears in his eyes, “Before they took over coaching responsibility our teams were not finishing with strong records, sometimes not even winning over half their games. After Josiah and Dan came, we’ve finished with the three best records in our team’s history so that shows how impactful they’ve been to our team. I’m gonna miss them.” Hopefully, Titan soccer can continue to build and show its dominance in the conference, maybe snagging that regional championship in the process.

How to Actually Accomplish the “Couch to 5K” Transformation: Tips from a Amateur Marathoner

Be the first to comment on "Another Spectacular Soccer Season!"