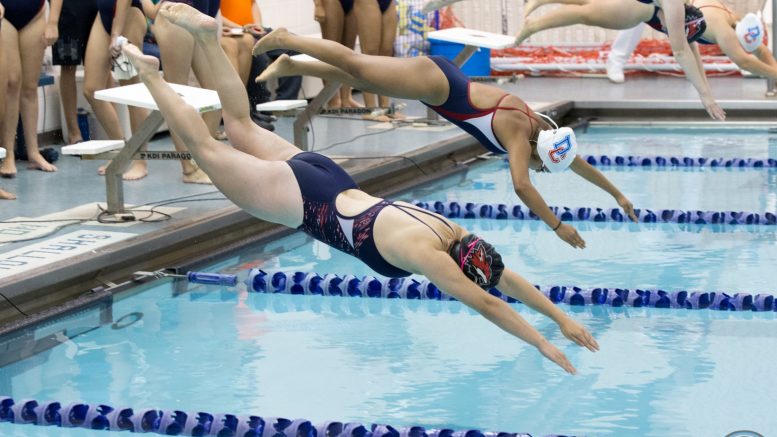 Swimmers dive into the pool during one of the season's meets. Credits: ISP

The team started off with a strong group of varsity sophomores this year, including Marcail McBride, Grace Kozlowski, Samantha Hall, Julia Wettstein, and Emma Darbro.

This year, the team sought to fix several major issues from last season, including consistent attendance, attention to swimmers’ technique, and team unity. Swimmers attended bonding events throughout the season and received timely feedback from coaches on their technique. The results were evident, as the team outdid its precedent from the 2017 season. Marcail McBride (’21) medaled at various meets throughout the season, including the gold in the 50 Free and the silver in the 100 Backstroke at the team’s first invite of the season.

The highlight of the season occurred at the Sectionals meet in mid-November, when O’Connor qualified for the IHSA state meet in the 50 Freestyle.

Next season’s captains will be Tatiana Michel and Marcail McBride from IMSA, as well as Sydney Petersen (’21) from Yorkville.

Be the first to comment on "IMSA Titans Girls Swimming"